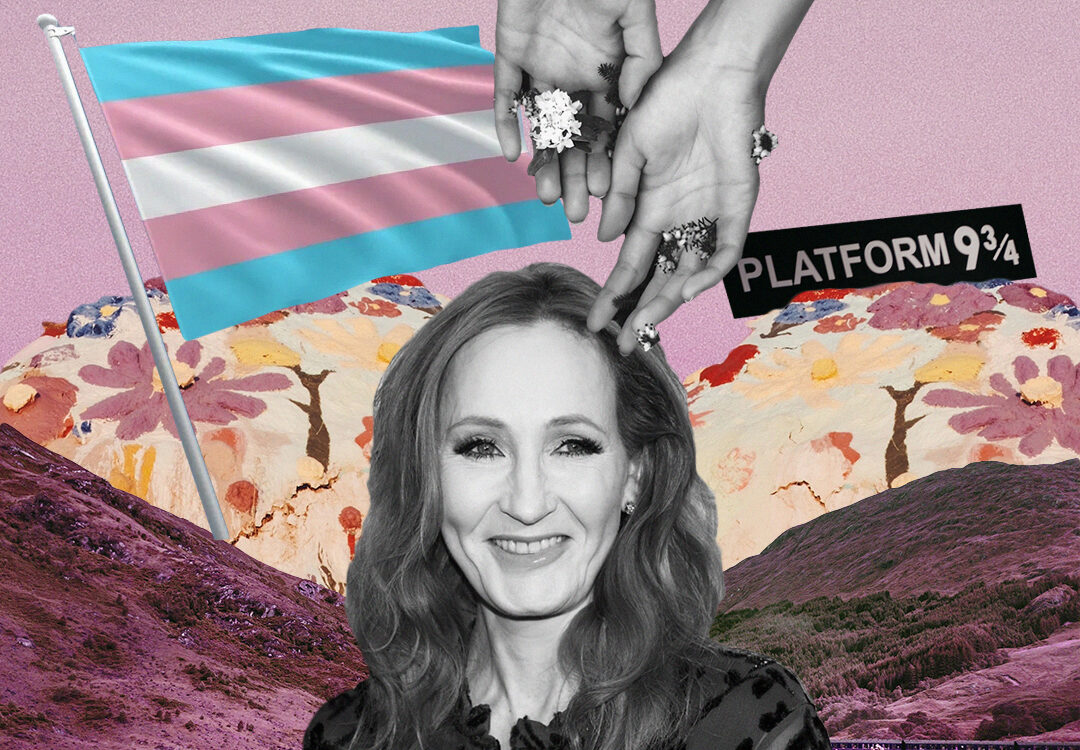 A Response to JK Rowling’s Personal Essay On Sex, Gender and Womanhood

JK Rowling wrote a seven A4 page essay responding to accusations that she’s a TERF (Trans Exclusionary Radical Feminist). You may be wondering why the richest author on the planet, who created the Harry Potter empire, has become entangled into internet beef (still very real beef) on being seen to be against transgender rights.

As Rowling explains, it all started when she tweeted support for Maya Forstater, a tax specialist who lost her job for ‘transphobic’ tweets and then took her case to an employment tribunal, asking the judge to rule on whether a philosophical belief that sex is determined by biology is protected by law. Since then Rowling has ‘liked’ tweets that are TERF-y. Even if she justifies liking them in her personal essay by saying they were “accidents” when screenshotting “interesting” things she was reading on Twitter, for the sake of character research.

Then during the week of global Black Lives Matters protests, after the unfortunate murder of George Floyd, Rowling shared an article by DEVEX, where the writers, Marni Sommer, Virginia Kamowa and Therese Mahon said the words “people who menstruate” instead of using the word “women”. Rowling tweeted, “‘People who menstruate.’ I’m sure there used to be a word for those people. Someone help me out. Wumben? Wimpund? Woomud?” 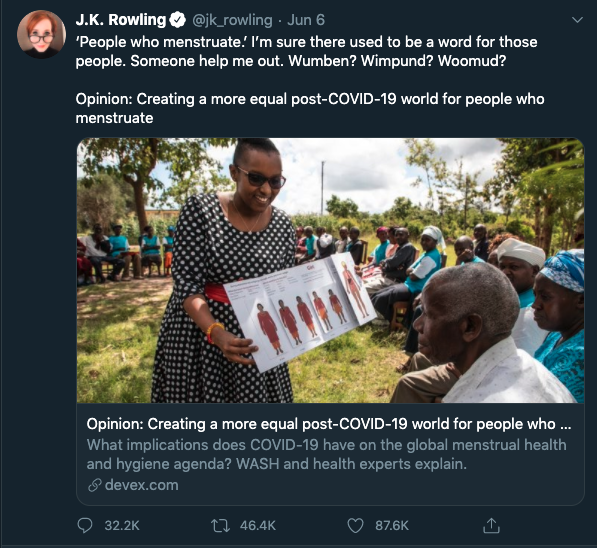 When continuing down this train of thought, what Rowling missed out on was the inclusivity intention by that headline. It didn’t mean women were no longer were a part of the narrative, but that transgender men and non-binary people menstruate too. Just like many cis-gendered women do not. Or maybe the issue is that she knew that the premise of the article was inclusive, and suddenly, women like her, were no longer the centre.

In her personal essay, Rowling discusses how she has been looking at gender studies for years, especially recently due to writing a character that will be growing up during these times. Who knows, is what reads between her flippant lines, “If I’d been born 30 years later, I too might have tried to transition”. As if transitioning is the easy choice. “The allure of escaping womanhood would have been huge.” As if transitioning genders is about escaping womanhood.

In her personal essay where Rowling states five distinct reasons why she is “worried about the new trans activism”, she uses words like “safeguarding” and “phenomenon” under the guise that she is protecting womanhood for the rest of us. She also speaks of cancel culture, “I must have been on my fourth or fifth cancellation,” and the toxic culture women are growing up in now, that is apparently suppressing the conversations Rowling is trying to have around sex and gender.

Yet what I find most interesting about Rowling’s extensive response is her expected knee-jerk reaction to being called out for her views on the transgender community. Her views are leaning towards a strain of feminism that – for the most part – has validated and raised her up as a white, upper-class, rich, famous, respected author and binary woman. The ultimate ‘girl boss’. Now Rowling feels silenced. When responding to ‘haters’, “assuming a right to police my speech”, Rowling’s fragile womanhood is showing.

Her views are leaning towards a strain of feminism that – for the most part – has validated and raised her up as a white, upper-class, rich, famous, respected author and binary woman.

And oh, it’s obvious and layered in saviourship, in a way that only straight white women know how to do. Historically, white women like Rowling have remembered their gender when it suits them. Played the role of innocence like any other Karen and pushed onto others the one-size-that-doesn’t-fit-all template of what womanhood should look like and be followed by other women. They are masters in switching the flip on when to play damsels in distress to being on the defensive, all while not being able to grasp that no one is attacking them. Especially a minority community, such as the transgender community, which is one of the most marginalised in the world.

The funny thing is, it’s clear through Rowling’s essay, that her issue isn’t actually about trans women — because then she’d have to see trans women as women — but predatory men. She justifies her “concerns” by saying, as she is the founder of a children’s charity Lumos, and the victim of domestic violence, she has to be weary of any potential harm. By using examples such as violent men misusing neutral toilets, Rowling says by questioning new trans activism, she is simply defending women-only safe spaces.

She also does the equivalent of ‘I have a black friend’ when she tries to excuse her actions by saying she too knows transgender people and could never “think of her as anything other than a woman”. All without realising that it is not her permission to give.

“But, as many women have said before me, ‘woman’ is not a costume. ‘Woman’ is not an idea in a man’s head. ‘Woman’ is not a pink brain, a liking for Jimmy Choos or any of the other sexist ideas now somehow touted as progressive,” pens Rowling. This narrow view of how trans women experience womanhood, that the trans experience is simply a costume, is telling of how Rowling sees trans women and men. When in actuality, from speaking to trans women, looking like a cis-gendered woman, is not the epitome of self-acceptance. Yes, womanhood is not a costume, but gaslighting a whole community, as they are not complying by your rules of womanhood, is simply a performance in itself.

From speaking to trans women, looking like a cis-gendered woman is not the epitome of self-acceptance. Yes, womanhood is not a costume, but gaslighting a whole community, as they are not complying by your rules of womanhood, is simply a performance in itself.

Rowling attempts to bring in scientific research, which simply put, tries to back her thinking that “biological realities” are at threat. By bringing in examples of the number of transgender women and men who have regretted their decision (when detransitoning numbers are tiny, Forbes has called out all Rowling’s false facts), and other researchers who are nervous at the rate of this new ‘phenomenon’ among teenagers makes me ask the simple question: what is it that Rowling feels is actually at threat? What is it that she is losing?

Is it actually the stories around cis-gender women (as if we haven’t had the mic on womanhood since the dawn of time) or is it that the world is no longer hers to make the rules in? And couldn’t her energy for women go elsewhere, with everything going on in the world? Let’s say, to the black women, who are being murdered by police brutality right now?

Rowling’s white feminism is textbook. She’s pissed off about periods. The one thing that tends to fuel TERFs everywhere.

How dare someone who does not identify as a woman any more get to experience this too, is what’s said behind her rage. Funnily enough, and I’ll speak for my ovaries, periods aren’t that special. They’re not the central thread of my womanhood. But like much of white feminism, which tends to feed only the mainstream and push no conversation or change forward (if it did, FGM would be on everyone’s radar as well as stories about menstruating every month), Rowling’s work for women is for women who are like her. Whose stories have been repeated so often, it would make you believe womanhood should look and be experienced only one way.

Rowling questions on Twitter, “If sex isn’t real, the lived reality of women globally is erased”, to which author Fatima Bhutto responds, “I’m pretty sure we will survive”. Yep, us cis-gendered women will be alright.

In the same breath, she writes, “I expected the threats of violence, to be told I was literally killing trans people with my hate,” when in reality, dangerous discourse such as this, under the mask, that this message is something for women, (trans women included), everywhere, is killing lives.

Someone of JK Rowling’s influence has power. Publishing power. Monetary power. Power which could have raised a community of women, who actually are targeted. Those who are trans women and men of colour. Those who are black trans women and men. But instead, here she is, trying to convince us that it’s all for us women and that Dumbledore was in fact gay all along. Rowling in poor taste writes ‘grow a pair’, to which I say, I wish she could do the same.