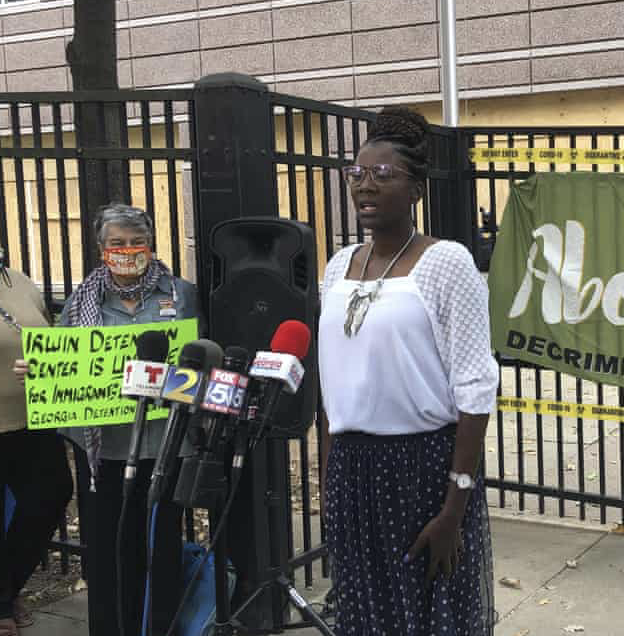 America: the Land of the Stolen Uterus

Earlier this week, Irwin County nurse and whistleblower, Dawn Wooten, spoke out on the medical malpractices happening to immigrant women at Irwin County Detention Center in Ocilla, GA. According to Wooten, immigrant women are receiving unauthorized hysterectomies by Dr. Mahendra Amin, who is known amongst the detainees as “the uterus collector.”

In an interview with MSNBC’s correspondent Jacob Soboroff, Ms. Wooten said, “You get in your vehicle after a twelve-hour shift and you cry yourself home and you’re the only one in the vehicle asking, “Why? What is going on? What is happening?””

We have the same questions.

Why? What is going on? What is happening?

Apparently, it’s not enough for ICE to take children from their mother’s hands, separating families, and forcing immigrants to live in unsanitary and dangerous conditions. Already breaching international human rights law, now they’re ripping women’s uteruses from their bodies without their consent.

And for what reason?

Eugenics, most definitely. A war on women. The policing and control of a woman’s reproductive system to ensure she has no autonomy over a body that is no one else’s but her own. And the simple truth that under our current administration, immigrant women, men, and children are not seen as human beings with rights, because they dared to cross the border and seek a better, safer, and more prosperous life for themselves.

So, they’re thrown in detention cells, which is a fancier term for cages that are oftentimes so crowded, they can barely move. They’re fed inedible food and drinking water of poor quality, they’re denied medical care, and now they’re involuntarily sterilized. All while Donald Trump lies to America that ICE is doing everything in their power to create a safe living environment.

Safe, they most definitely are not.

Especially, it seems, the women.

A quick catch up: between 1909 and 1979, more than sixty-thousand unauthorized sterilizations were performed on women through government organized programs, and the most directly affected women were women of color and those with lower incomes. While more affluent white women had access to private healthcare, poor women and Black women were subject to healthcare run by a government that did not deem them suitable for nurturing and reproducing. So, they were sterilized and rendered unable to have children. You can read more about this on The American College of Obstetricians and Gynecologists website here.

Dr. Mahendra Amin has continued to treat women held at Irwin County for three years, despite numerous complaints from his patients. Some women have claimed he mishandles them and leaves them bruised. Others have alleged he removed their uteruses without their knowledge or consent.

Dr. Amin was also the subject of an investigation with the Justice Department in 2015 after submitting false claims to both Medicaid and Medicare. A $525,000 fine was paid by Dr. Amin and the other doctors involved in the case. Was this swept under the rug when he was approved to treat women at Irwin County? Or did we collectively agree to not care because the patients aren’t white?

One detainee said that she feels like Dr. Amin was “experimenting with our bodies”. Another shared that she heard Dr. Amin mid-surgery state that he accidentally removed the wrong ovary, thus resulting in him having to remove the other.

“She was supposed to get her left ovary removed because it had a cyst on the left ovary; he took out the right one. She was upset,” says Wooten. “She had to go back to take out the left and she wound up with a total hysterectomy. She still wanted children – so she has to go back home now and tell her husband that she can’t bear kids. That’s his specialty. The uterus collector. Everybody’s uterus cannot be that bad.”

These operations are being performed on vulnerable women who are terrified, alone, and who are not being clearly communicated with. They don’t know why they’re being operated on and aren’t asked if they even want them in the first place. According to the American College of Obstetricians and Gynecologists, female sterilization is an incredibly serious medical approach to ensure the patient will never have children. It requires communication, understanding, and sometimes even counseling.

According to Wooten, nurses are working to provide translation services to the best of their abilities, oftentimes relying on Google translate or even another detainee to act as a translator, but the services are not sufficient, and women are being taken in for procedures they do not understand and do not consent to.

One would assume if a patient does not understand what is being communicated to them, medical treatment would halt until both patient and healthcare provider were on the same page. Why isn’t this happening with immigrant women in detention facilities? Because they’re not Americans? Because they’re people of color? Because, ultimately, at the end of the day, women are not seen as all that important?

And why would ICE implement procedures to assist in the communication between detainees and staff when it’s so much easier to control and manipulate populations when there’s an obvious barrier between them?

Since Trump took office, there has been a war on women. From denying adequate birth control, drastic attempts to to make abortions illegal, and now forced sterilization. It’s eugenics 101. The act of “improving” the human race is happening right before our eyes, and it has been for the past four years. It’s almost as though, if you’re not male and you’re not white, you’re a second-class citizen and your health and livelihood simply don’t matter.

“The standard of care, it wasn’t timely all of the time,” said Wooten in an interview with Chris Hayes. “They would have procedures where they would fill out forms to be seen, those forms would be shredded, they would be told there was nothing going on with them.”

Remind me again how these detention centers are keeping immigrants safe?

For the United States under the Trump administration, one less Black or Brown life is a good thing. And one less uterus to prevent a pregnancy, especially a uterus that’s owned by an immigrant? Even better.

The rate at which our country has fallen is staggering, and it’s only getting worse. By continuing to normalize the mistreatment of human beings, we are perpetuating the false narrative that we’re “making America great again” when, in fact, we’re doing the complete opposite.

Tell me, what would you do if this happened to you or to your sister, or daughter, or friend? Would you want someone to believe you? Believe them? Would you hope someone listened?

Why? What is going on? What is happening?