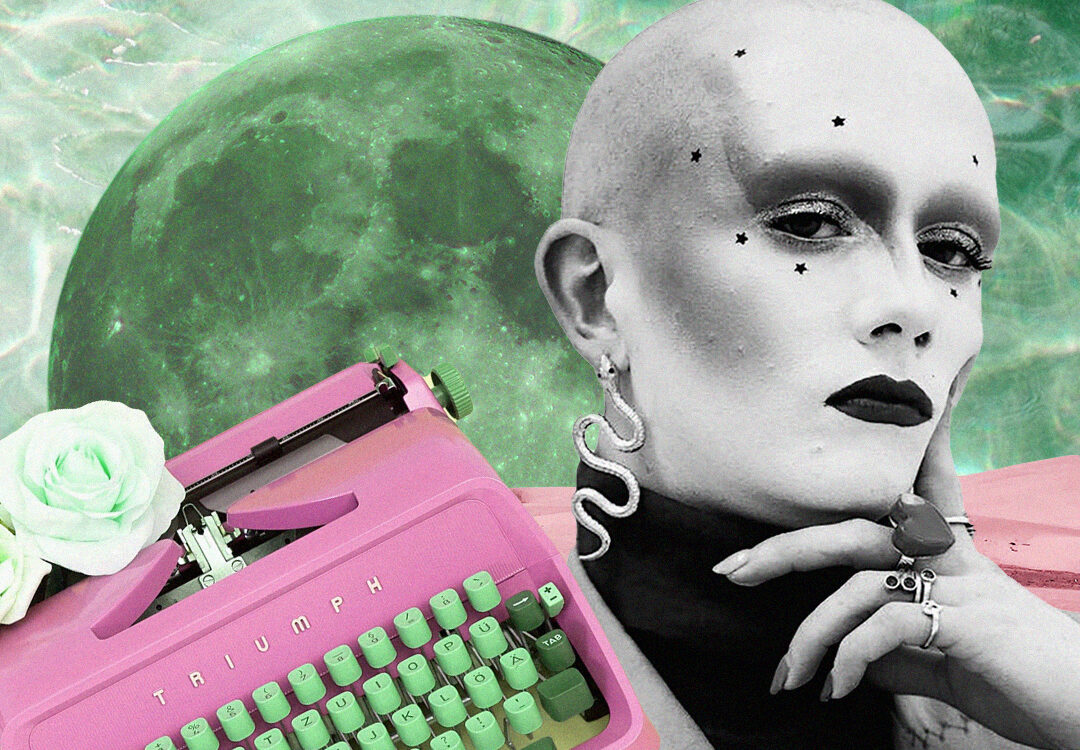 “Be An Ally to People. We Need to be Allies More Than Ever”

Non-binary writer, public speaker and model Jamie Windust has cultivated a community online to curb the isolation that queer people can feel in non-queer spaces…

Every week, we chat to an inspiring Restless Rebel in our newsletter, The Restless Reader. We dive deep to cover topics such as power, pleasure, success, and so much more. Here’s our chat with Jamie Windust from issue 4, first published in February 2020. You ready for it?

Tell us about your work…

I am a writer, public speaker and model. I am also a consultant mainly looking at the UK media and its inclusion and accessibility to LGBT people. Trans inclusion and representation is really important to me. Representation needs to be backed up with inclusion and opportunities, not just within media but within people’s chosen industries.

When do you feel at your most powerful?

When I get to see a project come together. When I am in a situation where something that I’ve been working on for a long time has come to fruition. I like feeling power, not in a dictator sense, but power in that I am making an impact. I think power for me isn’t always about control, but about influence. I like to see the power of the work that I create ripple out, rather than a managerial kind of power, that’s not really my style.

Today is the start of pride month, and it's time be acting on our words that we say day in, day out, every day of the year. Personally I don't think we need anymore affirmations of white guilt formed into content, so i'm going to just remind people that black trans folk started the queer liberation movement. They were, and still are, the pioneers of our community. To donate and raise funds for vulnerable queer people. If like me, you have pride content and work planned, donate part of your fee. Ask brands/organisations to match your fees, it's the bare minimum. Don't just raise the voices, but be there and help them when the change needs to happen. It's not enough to just open doors for people, and let them walk through alone. Celebrate pride with anger, with severity, and with sincereness, but remember to celebrate it with frivolity and lightness. Allow yourself to have that moment to recognise and feel pride in your strength and your power in whatever way you can. Love you all x

I am always restless. I think when you work for yourself you have to be. I rarely meet freelancers who are content. Especially if you work in the media, it’s news based, so things can change really quickly, and you have to be adaptable. So I am restless, not in a way that I’ve got nothing to do, but I am always thinking, what’s next? Wondering how to elevate what I am doing.

What advice would you give to your 15-year-old self?

I think it’s important to remember that although you feel old, you’re not – and you still have a long way to go. I think I still have that a bit too. I need to remember that I am 22, even though I am doing a lot, I have this mindset that I need to do it all, now. At 15, you’re still at the start of everything, so it’s okay to take the pressure off yourself. At 15, you’re in education, maybe moving on to sixth form, or thinking ahead to college or uni, there’s a lot of changes ahead. So relax, actually be a bit restless, take time off, because you won’t have it as you get older. I know you want to be a grown-up, but as soon as you are, you won’t want it!

How do you identify?

I identify as queer and non-binary.

Do you think it is important to talk about yourself in those terms in the industry you work in?

Yes, in a way, but as writer, for example, you have a skill that doesn’t always have to be identity focussed. Just because you write about identity doesn’t mean you can’t write about something else. The one thing I will always say, if you talk about identity in your work, you should always be in charge of when you do that and why you are doing that. You should never be made to do that or presumed that you will do that, or pigeon-holed to speak about your identity all the time. There’s that classic idea of prefixing an award or a title with your identity. Now, if I am writing something that isn’t about my identity, I won’t mention it because sometimes you don’t need to. My experiences of being non-binary will come through in what I am writing about, I don’t have to essentially come out in the piece.

How do you measure success?

Success, for me, is something that’s really hard to judge, there’s always more to be done. I think it’s a matter of whether or not I am proud of what I’ve done. My recent TED talk [Support for trans people isn’t radical – it’s urgent] was one of life’s big successes because not only was it something I was proud to speak about but it was a skill that I learnt. It was a four-month training process to be able to do that kind of talk. Things like that make you feel successful because it’s a skill that needs crafting.

How different are your expectations of your adult life from the reality?

I definitely didn’t expect to be doing what I am doing now. I am a visiting lecturer at my old university and one thing I always say when I go there is that we are socialised to think that we’re going to go into very traditional forms for work. I think I expected to go into a very traditional job and the job that I am doing now is in no way traditional. My expectations were one thing but I like that I have adapted and changed according to what I like. If I enjoy something, I try to make it work as my job. I try to not have too many expectations about what I am doing now because sometimes that changes or doesn’t come to fruition in a way that I think it might happen. Not in a messy way, but things change and you have to change with then.

Do you ever feel pressure?

As we near the end of mental health awareness week, I wanted to share some thoughts and words. I've just finished my first 12 weeks of queer counselling, and it's been an almighty trip. Learning about yourself, and your mind, is tough. Its less about learning new things about yourself, than it is reacquainting and confronting the parts of your life that you already knew existed, but were too afraid to see. It's been helpful, despite it feeling like you want to implode everytime you sit down in that chair. My biggest topic was self appreciation and worth. Its easy for people to presume you are loud, confident and proud of what you do all of the time, but for me that's not the case. I struggle so massively with seeing my achievements and work, and my relationships with others as something I am worthy of, and should be proud about. I never share success with others because I wonder why they'll care, because why would they? Take my book for example. I can't wait for it to be out, but I also couldn't imagine anything worse. I struggle to feel like I deserve the opportunity. That what I say doesn't matter because essentially, I don't. You don't deserve anything. No one cares about what you're doing. It's important to remember that no one, and I mean no one, has it all under wraps. Success doesn't equate to perfection. No one has perfect mental health. We all have a 'mental health', and it's important we remember that it's ok for it to fluctuate. We are not failures when it dips, we are merely navigating a world full of pressure, objectification, prejudice and reality. It's our job to remember we are worthy of care, and time, and effort into looking after it. Love to you all, especially those who have suffered the hardest during this time. All the love x x x

Do you think it’s important to be completely honest on social media?

Yes, that’s one of the main ways that people engage with me. When I first started my page it was used as a diary, as I didn’t have anyone else to talk to. I didn’t have anywhere else to share what I was feeling. I have kept that ethos from when I was 16, when I first started. Now it’s like a community, a way to feel connected to people who aren’t necessarily geographically located near to you. I know it gets a bad rep, but social media can also curb the isolation that we feel as queer people in non-queer spaces.

“I know it gets a bad rep, but social media can also curb the isolation we feel as queer people in non-queer spaces.”

What do you think are the biggest challenges we face in society?

One of the big things I spoke about in my TED talk, which is still relevant now, is empathy. I feel like we are in a state of apathy. I think a lot of people still can’t empathise with other people and their struggles, because they have misconceptions or preconceptions or prejudices or unconscious bias and they just can’t get past that. For me, what is important is that we realise our struggles and our fights but also realise that we’re part of a community of people that sometimes have even worse struggles. Be an ally to people. We need to be allies more than ever.

We love to shamelessly embrace our guilty pleasures, what’s yours?

I take myself out for dinner far too often. And it is a guilty pleasure because it’s three or four times a week. I know how to cook, I should stay at home and cook, but I don’t. I like to feel fancy. And it’s always on my own, I rarely go with other people. I would rather go by myself. Being on my own is way more fun. I put a podcast on or watch Netflix.

What are you currently reading?

Michael Cashman, who is one of the founders of Stonewall, has just released a memoire called One Of Them. It’s about how he got involved with Stonewall, it’s really, really good. I also just read the book by Chanel Miller, who was the person at the centre of the Brock Tuner rape scandal, it’s called Know My Name. The whole time she was under an embargo not to be named, and now she’s written her own story about what actually happened. It’s amazing.

Give Jamie a follow on Insta, and watch their recent TED talk here.