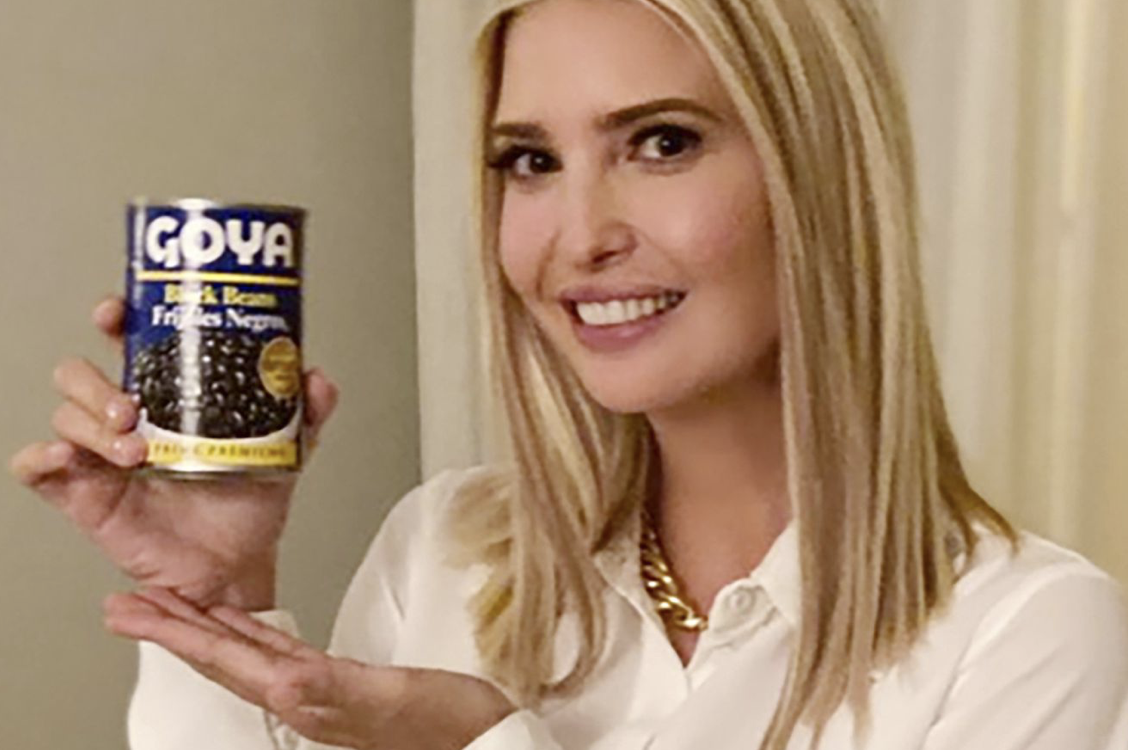 Donald and Ivanka love beans so much, it made their Instagram grid.

Never in my wildest dreams would I think I’d see Ivanka and Donald pose with cans of Goya black beans, but here we are. Life is but a rollercoaster of emotions, and the United States of America’s administration is but a clusterfuq of contradictions. But, in many ways, is it even all that surprising?

“Money blinds people and it doesn’t surprise me that the CEO of a successful company is backing Trump,” says Laura Gutierez in Arlington, VA. “It’s the 1 percent backing the 1 percent and the 99 percent of us need to do what’s right and not vote for these people.”

Is Donald even the President? Is Ivanka even a human being? Or are they food influencers on the brink of launching their own father/daughter mukbang channel on YouTube where they taste test every Goya product and also plot to destroy the free world?

The American people are confused. We need answers! But here we will remain in our confused state, without answers and without clarity, and are we even surprised? Neither Ivanka nor her father have done much good for the American people anyway.

There are so many issues with the recent photos of Ivanka holding a can of beans and Donald smiling at the Resolute Desk with an array of Goya products lined up before him. Where do we even begin?

I guess we could start with, like, the law and how both of them definitely broke it?

The Hatch Act, which is a law that was put in place in 1939, prevents federal employees from engaging in partisan activities, such as, oh, I don’t know, the President of the United States endorsing a food brand after the CEO of said company said America was “truly blessed” to have him as president. Strike one.

Posing with Goya products at the Resolute Desk, of all desks, is another eff you to the country and its history. Strike two.

The Resolute Desk is the desk where the President runs our country from. Some have opted for other desks, and that’s their business, but most have not. Most have used this desk. It’s an important desk! Google it! Wars have been planned, bills have been signed, and ideas and political moves to advance our country have been strategized at this desk.

It’s the desk where it happens.

And Trump reduced it to a prop, along with his slew of beans and adobo, both of which, one can absolutely deduce, he has never eaten.

This photoshoot occurred during a pandemic, no less, a pandemic that has resulted in 141,000 deaths in America (and counting) that he is responsible for and four years after he posted a photo of a taco bowl from Trump Tower Grill with the caption, “I love Hispanics!”

Ivanka is no better. She has the power and platform to be a pioneer and icon for women’s rights, but instead she fails miserably and reduces her platform to faux feminism and bean-slinging.

Ivanka is to feminism as Goya products now are to Latin cooking. And that’s downright useless.

The Trumps’ latest photoshoot is not only illegal, sad, and embarrassing, but it’s also quite contradictory, considering it wasn’t that long ago that Trump shit all over the Latinx and Hispanic communities by calling Mexicans terrorists and violent members of the drug cartel, lying about who will pay for the construction of a border wall, and also Hurricane Maria.

The man can’t stand Mexicans or Mexico. This isn’t surprising news. It’s terrible news, but it isn’t shocking news. But for someone who apparently loves Americans, he surely didn’t bat an eye when he left out 3.4 million of them in September 2017.

More than 80 percent of Puerto Rico and most of the 3.4 million residents were living without power in the aftermath of Hurricane Maria. People lost their homes, their livelihoods, their loved ones, and many had no access to water, food, or medication needed to sustain life. The situation became so dire, the Mayor of Puerto Rico wept on television begging for relief from the United States.

And what did we do for the longest time? We watched. We sent our thoughts and prayers. And we waited, too.

And while Americans waited, we also raised funds ourselves and organized aid to be sent to our fellow American citizens in Puerto Rico. Because, as we’ve seen, in order to get the job done under this current administration, we have to take matters into our own hands.

They desperately needed help and the leader of the “greatest country in the world” sat back and watched.

Correction, he threw on some khakis and played golf.

Trump did eventually visit Puerto Rico. Let me not leave out that part. He went… on October 3, 2017… for approximately four hours. And while he was there, he took it upon himself to throw paper towels at the people who had literally lost everything like he was the t-shirt cannon guy in-between innings at a baseball game.

So, this Goya stunt? It’s pathetic. It’s a ploy to distract us all from the atrocities he has caused and to lead us to believe he cares for this country’s citizens. And he doesn’t.

“Trump can’t comprehend that our cultures are different,” says Laura. “Mexico versus Spain versus Puerto Rico versus Peruvian versus people from Argentina, and I don’t think his racist brain can process the differences.”

It’s funny that they have pictures holding cans of beans, actually. Perhaps you are what you eat, which makes sense considering they are both a literal pain in the side of the United States of America.

They are the gas we are ready to pass.

You can register to vote here.