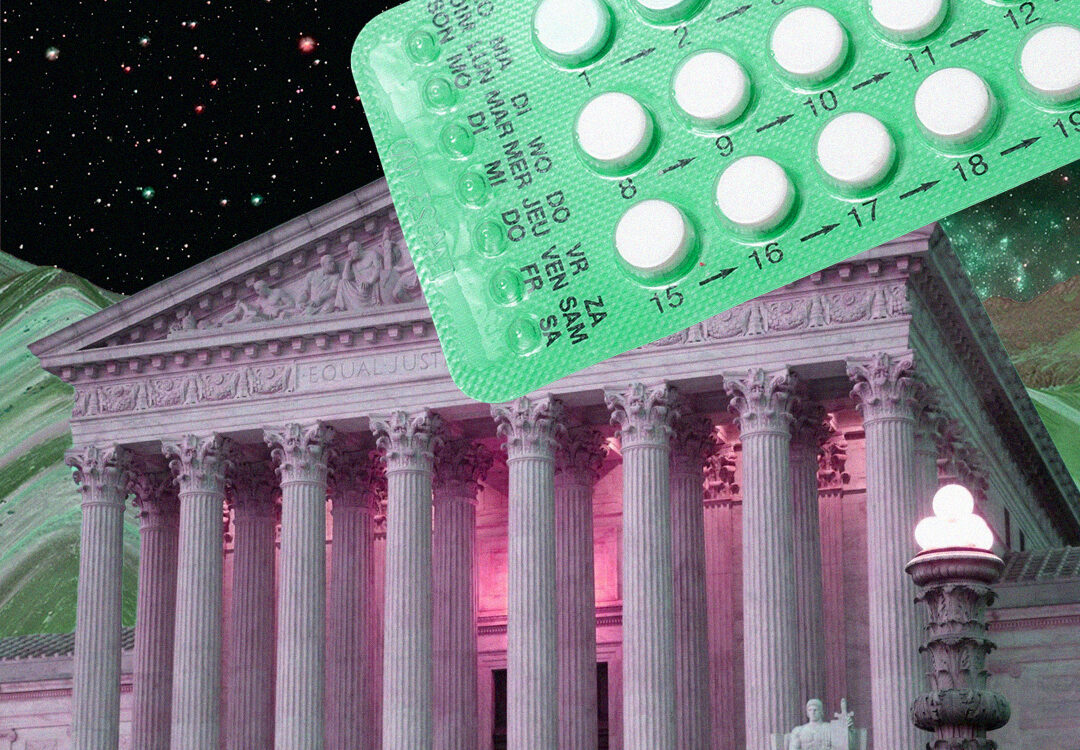 In the twentieth century, Black women’s fight for reproductive rights was not only a fight for autonomy over their own bodies, but also a fight for racial justice and a fight against misogyny.

In June 1960, the first hormonal birth control pill called Enovid was marketed as a means of liberation and opportunity for women. If taken, women could pull themselves out of poverty by having smaller families and could choose whether they wanted to go through pregnancy and motherhood—white women, that is. Black women did not have the same luxury or the freedom to choose but instead faced barriers caused by institutional racism that influenced their decision whether or not to birth a child.

Due to racist hiring practices and political policies, many Black families were in poverty. A higher number of Black women had jobs regardless of age, marital status, or if they had children compared to white women. They were also working lower paid jobs. In 1960, more than 33 percent of all Black women worked as domestic servants compared with 3.2 percent of white women. All women with 12 years of education—which was less than 20 percent of Black women—held jobs as clerical workers compared to 54 percent of white women. Black women also took up the agricultural and retail market where they were excluded from state protections such as the New Deal minimum wage, which guaranteed workers a national minimum wage of 25 cents per hour, a maximum of 44 working hours a week and prohibited general employment of children under 16.

Access to family planning services, abortions, and the pill did nothing to give Black women reproductive freedom. After all, there is not much freedom in not bearing children because you do not have the financial means. In addition, keeping Black families small in numbers would not pull them out of abject poverty, because, although having more children means spending more money, the root cause of poverty in Black families was institutional racism.

Those who were deemed as being part of the “undesirable” population, i.e. disabled people, Black women and men, people with mental illness, people in poverty, unmarried mothers, and immigrants were sterilized throughout the twentieth century. The sterilization of ‘undesirables’ dates back as far as 1907 when Indiana passed the world’s first sterilization law. Thirty-one states followed suit. The goal was to limit the ‘undesirable’ population justified by eugenics, a way to “improve” the genetic makeup of human beings by selective breeding. Researcher Alex Stern said that sterilization was viewed as “a necessary public health intervention that would protect society from deleterious genes and the social and economic costs of managing ‘degenerate stock’.” The “Asexualization Acts” allowed California to forcibly sterilize more than 20,000 men and women. Black women were disproportionately affected. From 1950 to 1966, Black women were sterilized at more than three times the rate of white women and more than 12 times the rate of white men.

Given America’s long history of sterilization and continuation in the practice, male members of the Black Liberation Movement saw the pill and abortion as a political tactic to kill off the Black population. They called on Black women to refuse abortions and the pill and encouraged them to give birth to more Black babies for the movement. Black women were caught between the crossfire. The government wanted them to stop having babies and Black men wanted them to have more. Their right to choose wasn’t on the agenda.

Interestingly, even before the 1960s and as early as the 1940s, the women of the National Council of Negro Women (NCNW) fought against the idea that contraception was Black genocide. They argued that the regulation of their sexuality and reproductive freedom took away their individualism, and argued that using Black women’s bodies as a political tool in the fight for racial justice is misogynistic. To call the pill an instrument of Black genocide is to imply that if a Black woman were to use it, she would be committing genocide against her own race. This shifted the blame from institutional racism, which caused many Black women to have an abortion or use contraception, onto Black women. In addition, the narrative took away women’s right to choose, because it guilted women into thinking that they would be betraying their own community by exercising their autonomy.

Black women were placed in an identity limbo. They felt excluded from the mainstream feminism movement because white feminists failed to acknowledge how Black women do not experience reproductive rights and the pill in the same way. At the same time, men from their own community were regulating Black women’s sexuality and reproductive freedom, just as the government was. Women were simply reduced to baby makers; nothing more, nothing less. The politicization of Black female bodies was not new. During the height of slavery, Black women were used as breeding tools in order to keep slavery going, along with the economic benefits that it brought to white slave owners such as multiplying the colonial industrial complex’s labor force.

Black women grew tired having their agency stripped by both the government and Black men and being ignored by white feminists. Out of necessity, Black women had to create their own space in which they would feel heard and drive significant change. Fran Beal co-founded the Black Women’s Liberation Committee in 1968. This evolved into the Black Women’s Alliance and then the Third World Women’s Alliance, which analyzed the intersectional issues of race, class, and gender Black women face in the fight for their reproductive freedom and control over their own sexuality. This is something that The Women’s Liberation Movement had failed to do because the movement focused on the experiences of white (mainly middle and upper class) women.

Black women in their fight for sexual and racial justice had talked about intersectionality long before the term was even coined by Kimberlé Crenshaw in 1989. The term refers to the interlocking and multiple forms of oppression individuals face due to their identities. Their experiences of being both a woman and being Black had proven the existence of intersectionality and had informed the debate of how to fight for inclusivity. Anna Julia Cooper at the World’s Congress of Representative Women in 1893 declared, “The white woman could at least plead for her own emancipation; the Black woman, doubly enslaved, could but suffer and struggle and be silent.”

Black women’s choice to have children is still very limited due to on-going institutional racism which contributes to poverty in Black communities, lack of access to contraception and healthcare inequalities. Black women do not have adequate access to reliable and affordable contraception. The National Survey of Family Growth from 2006 to 2010 found that 63 percent of Black women had unintended pregnancies compared to 42 percent of white women. In 2017, a national survey revealed that only 39 percent of Black women aged 18-44 could afford birth control that was 10 dollars or less. The pandemic has exacerbated the issue of lacking access to contraception because it has increased financial pressures on families, as well as resulted in the closure of walk-in clinics and longer waiting times.

Black women’s contributions to feminism and sexual, racial, and reproductive rights continue to have a huge influence today. Black feminism explains why Black women are experiencing healthcare disparities to this day. Recognizing that intersectionality has a huge part to play as to why these inequalities occur is essential for policy makers, medical institutions, and grass root organizations to acknowledge in order to combat these issues.