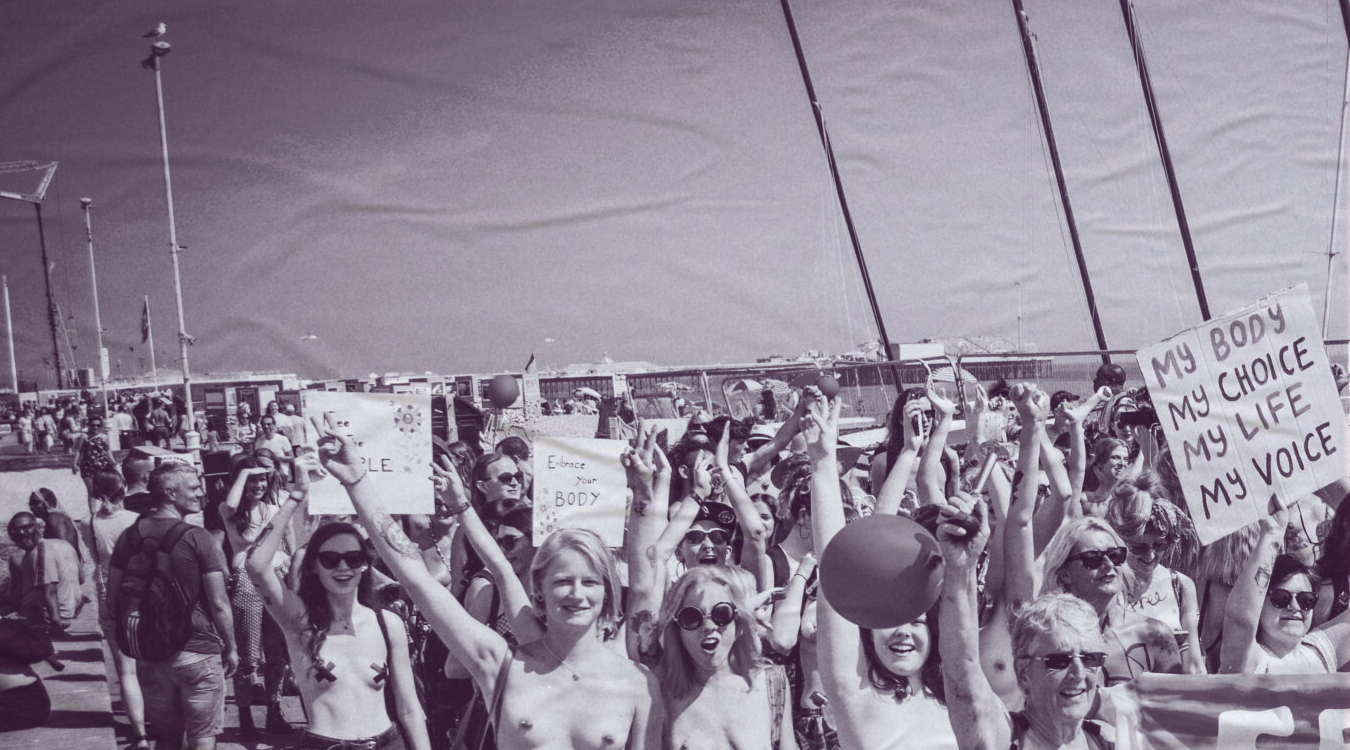 Our Nipples Aren’t the Problem, Men Are

A few weeks ago, I shared a post from Feminist’s Instagram account to my stories. It was a beautiful photo of women of all sizes, shapes, and colors lying nude in the earth. And they were laughing. They looked happy. One could guess they felt free. Due to censorship rules, the women were in strategic poses, and anything left exposed was blurred. It was deemed “appropriate” to share on Instagram, meaning the “offensive” parts of a woman’s body were hidden.

Within an hour, I received a notification from Instagram that my story had been removed since it went against community guidelines. At first, I was confused. What part of the image went against guidelines? I didn’t share full-frontal nudity. I didn’t share pornography. In my opinion, and in the opinion of hundreds of others according to Feminist’s original post, I shared art.

Admittedly, I felt upset that my story was removed, so I re-shared it. I thought it had to be a fluke if others had shared the same image, as well. Within minutes, it was taken down, and I received a more aggressive message from Instagram threatening to disable my entire account for “continuing to go against community guidelines.”

The post on Feminist’s account remained, and I noticed several other accounts had shared it, as well, which more than likely meant that someone who followed me reported the image themselves.

And that makes me furious.

I’ve always held a place of anger for how the female body is portrayed in the media and in society. From the minute women hit puberty, our bodies become sexualized and then become censored. It’s a buy one, get one free deal we never asked for.  Relatives comment on how “developed” we are, talking about the size of our breasts, or how we’ll grow up to be “heartbreakers”. Young women with fuller chests are even seen as more provocative and are trusted less than their peers with smaller chests. Can you believe that?

Sadly, I can, because we live in a world where our bodies are deemed as inappropriate… until a man desires them, of course.

“I’ve always had big breasts. In middle school, I was hunted by this principal. She would pull me out of lunch, class, and choir concerts to say my shirt was inappropriate. I don’t remember dressing inappropriately. I just had a body that developed faster,” Madeleine Robinson says.

Dress codes are established in schools to ensure students dress “appropriately”, but the rules are disproportionate between the male and female student body, and the rules are sexist. Think back to the rules established in your schools… who were they for? I remember having rules that girls couldn’t show their bra straps, visible cleavage, or our shoulders, and if we wore shorts, they had to come down to our knees. The boy’s dress code was to tuck in their shirts and wear a belt. That’s it.

“I was a great kid,” Madeleine says. “I never got in trouble, I have always been risk-averse and a rule follower, but I had huge breasts in the third grade. There was always this feeling my friends’ parents didn’t trust me like they thought I was trouble or threatening. Later in life, I saw this documentary – adults assume physically developed girls are doing more adult, inappropriate things, and they keep their kids away from those kids and treat them differently.”

We teach young girls that having breasts is burdensome and offensive.

“My outfit wasn’t scandalous. It was a skirt that went to my knees and a cap-sleeved red shirt, but unless you are wearing a turtleneck, with big breasts, most necklines show cleavage, because cleavage can go up to your neck,” says Madeleine.

We teach young girls that their bodies are not their own and that they must tuck away parts of them to become more palatable to society, more respected in society, and more appropriate in society.

“My father never fails to refer to me as “my daughter, the exhibitionist” if I wear shorts in front of him,” says Diana. “I’m now nearly 30 years old and it still happens. We also live in Hawaii where it’s hot, and he gets a pass to wear no shirt.”

We teach young girls that having breasts means we’ll receive unwanted attention from men, some of whom are our uncles, our fathers, or our teachers.

“I was first sexualized at age 11 when I got my first catcall walking home from dance class in the summer. I had just started growing breasts. This was the first realization that I needed to cover my body because I knew men were after me for it,” says Lauren.

We teach young girls all of these things… and we teach them so that boys and men never have to learn decency, respect, and boundaries. We censor young girls and women to better fit into a male-dominated society instead of standing up and telling men to scoot the hell over and make space for us. For all of us. Including our boobs! Because if men can show their nipples without the fear of being sexualized or walk down the street without the fear of being catcalled or simply exist in the world without having to look over their shoulder 25/7, then women should be able to do the same.

A woman’s body is not inappropriate. Anytime. At any stage of development. Behind any type of clothing.

Breasts, large or small or somewhere in-between, are not offensive.

And women who develop faster than others should not be shamed for their bodies functioning in the natural way their body was built to function.

And we, as a society, meant to uplift, support, and encourage our citizens, should not be shaming an entire group of people who just so happen to be born with breasts. The lifecycle of a woman is one giant wheel of misfortune, no matter which way you spin it, and it will never get better until we address the issue of censorship at its core, and that’s the fact that we collectively live, breathe, and breed an anti-feminist lifestyle.

A woman’s body belongs to no one but the owner of the body. A woman’s breasts and nipples should not be censored any more than a male’s breast and nipples. And a woman should not be made to feel like a burden, or a “slut”, or live in fear of her life for simply being a woman.

So, instead of censoring women in society and teaching us what to do and not to do, how about we teach the boys a thing or two? Because we can wear a turtleneck and walk in groups home from dance class, but let’s be honest – the outfit was never the thing that lured men in to do what they will with women. Their mindset was.

And where’d they learn that? They learned it from you.