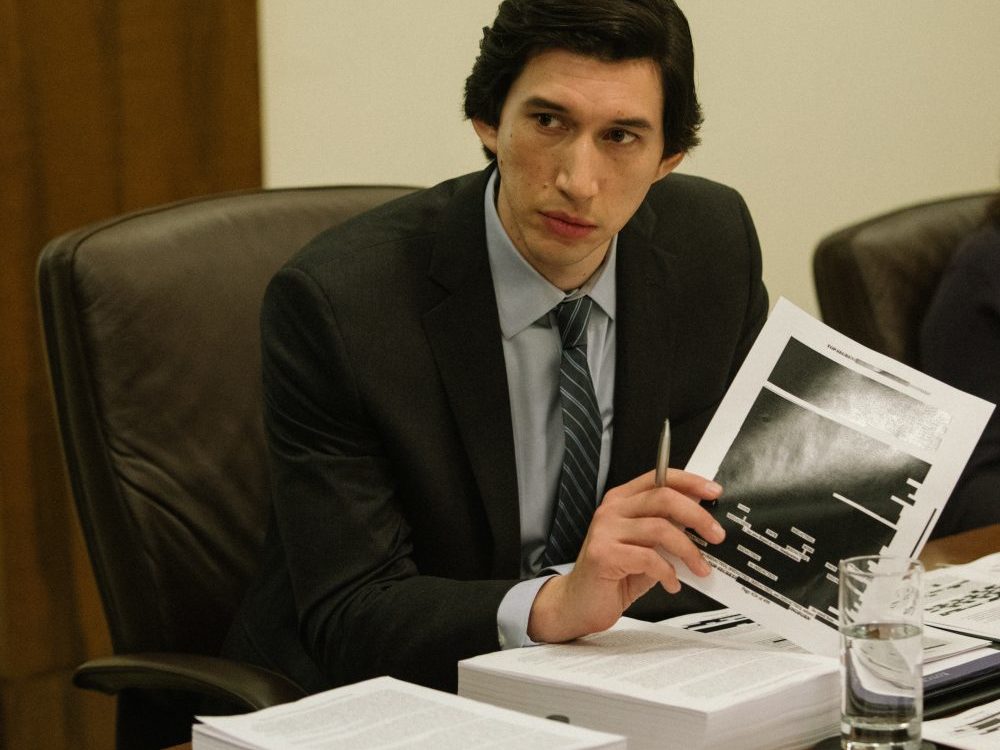 “The opinion that art should have nothing to do with politics is itself a political attitude.” So said George Orwell, and it’s a line borrowed by director and screenwriter Scott Z. Burns, as he seeks to explain what fuels his particular brand of film-making – one clearly driven by an attempt to make sense of the chaos in which we find ourselves. He previously explored environmental disaster and medical fraud in ‘An Inconvenient Truth’ and ‘Side Effects’. Now he’s turned his attention to political and financial cover-up, in ‘The Report’ and ‘The Laundromat’ respectively.

The Guardian recently reported a revealing spike in movies about “people speaking truth to power, no matter the consequences”, and, sure enough, ‘The Report’ stars an on-form Adam Driver as Daniel Jones, a tireless real-life Senate investigator charged with uncovering and documenting the US’s extensive use of prisoner torture in the name of “war on terror” after 9/11. The film, clearly a nod to such classics as ‘All The President’s Men’, serves as a juicy political thriller, but it’s message is clear – don’t believe everything the grown-ups tell us.

“When the report was finally released, it revealed the lengths the state would go to cover up its own actions,” reports Burns, who both wrote and directed the film, co-starring Annette Bening as Jones’s boss, Senator Dianne Feinstein. “My surprise was, and still is, how a narrative can get a foothold in society, and then it becomes very hard to get it eradicated. Toothpaste never wanders back into the tube.”

“To this day, there are lot of people in the US who still believe that these EIT (experiments in torture) measures are effective, despite what we’ve known throughout history. Napoleon made comments that torture doesn’t work, yet we find ourselves going back into that mode when we’re scared, when we’re angry as a society, and that continues to surprise me – that human beings return to behaviour we know isn’t effective in times of crisis, and we seem to lack the leadership or the insight to go, ‘No, that’s not how we solve this problem.’”

It’s been more than 40 years since ‘All the President’s Men’, starring Robert Redford and Dustin Hoffman, made the efforts of Watergate journalists Bob Woodward and Carl Bernstein seem not just righteous but impossibly glamorous, yet even now the present incumbent of the White House is allegedly up to very similar antics to those of Richard Nixon. This makes me wonder, do these political exposé films actually change our leaders’ behaviour, or just alert the rest of us to their weaknesses?

Initially, Burns shrugs off any responsibility beyond that of a filmmaker. “I can’t believe I would ever wake up in the morning and believe it’s my job to change things. It’s my job to tell a story in the most entertaining way. When it’s something as complicated as ‘The Report’ about one arm of government investigating another, my job is to pull the story out of the weeds and turn it into a thriller, rather than drag the audience into the weeds. I hope people are really entertained. It’s built to be a political thriller.”

“I hope that Trojan-horse inside of that, people see the story of Dan Jones, and look at systems, whether in the US or UK, and realise that people who take the best version of themselves to work, and behave with dignity and treat the system with respect and insist on rigour required of colleagues, that if we have those people in place, those systems can provide us with happy, healthy lives.”

“The movie is about our issues with transparency and culpability, and that’s part of the puzzle we need to still wrap our minds around. It’s one thing to say things were wrong, and it’s another to say the people who did them must be accountable.” (The McCain Feinstein Amendment in 2015, passed as a result of the publication of Jones’s report three years before, prohibited inhumane treatment of prisoners, including those held at Guantanamo Bay.)

American businessman and all-round sage Charlie Munger has previously reflected that no politician is so bad that, in future years, we don’t want them back to replace today’s versions, and sure enough, it does seem that, in the Trump era, George W Bush enjoys if not a reverence then at least a diluted fondness by the masses. Burns rejects this:

“There’s more than one flavour of evil in the world. Both of those presidents have significant shortcomings. With that Bush administration, there was a horrible event that happened on their watch and they reacted with a kind of fear, and paranoia, to try to keep their people safe, that spread all over the world.”

“We’re still learning the peculiar details of what the Trump administration is doing to our system,” he says.

“With Trump, the thing that is most frightening is that we all seem to be suffering from confirmation bias, and there doesn’t seem to be any cure for that. That is the biggest challenge – how can we ever come together if we are divided on something as rudimentary as the facts? It is possible to have a subjective experience of life, but there has to be some place under all this for facts.”

“When a leader can get up and say something we know is not true, and yet it seems to find its way to some people’s brains as truth, we have to look and ask, how did we get into this situation where things are so divided?”

“The media has a lot to do with it. The fact that you can decide what your reality is, based on where you put your TV aerial, is kind of terrifying.”

Burns can take one source of comfort from the recent past. 13 years after his Oscar-winning documentary with Al Gore first pricked the balloons of our environmental complacency, the message of that cinematic tour de force is finally hitting home.

“I do think the appearance of these films has an effect on our collective consciousness,” he agrees.

“When we made ‘An Inconvenient Truth’ in 2005 or ‘06, I think naively I walked around for a year or two, thinking we would change the world, but the status quo is really entrenched and the people who would benefit from the status quo are very difficult to persuade, because they make a lot of money not being persuaded. It takes time for the film to have an effect, but I do think films end up changing things.”

Even Donald Trump, who clearly hasn’t learned the lessons of Watergate even now? Burns shrugs. “Well, maybe he hasn’t seen the movie.”