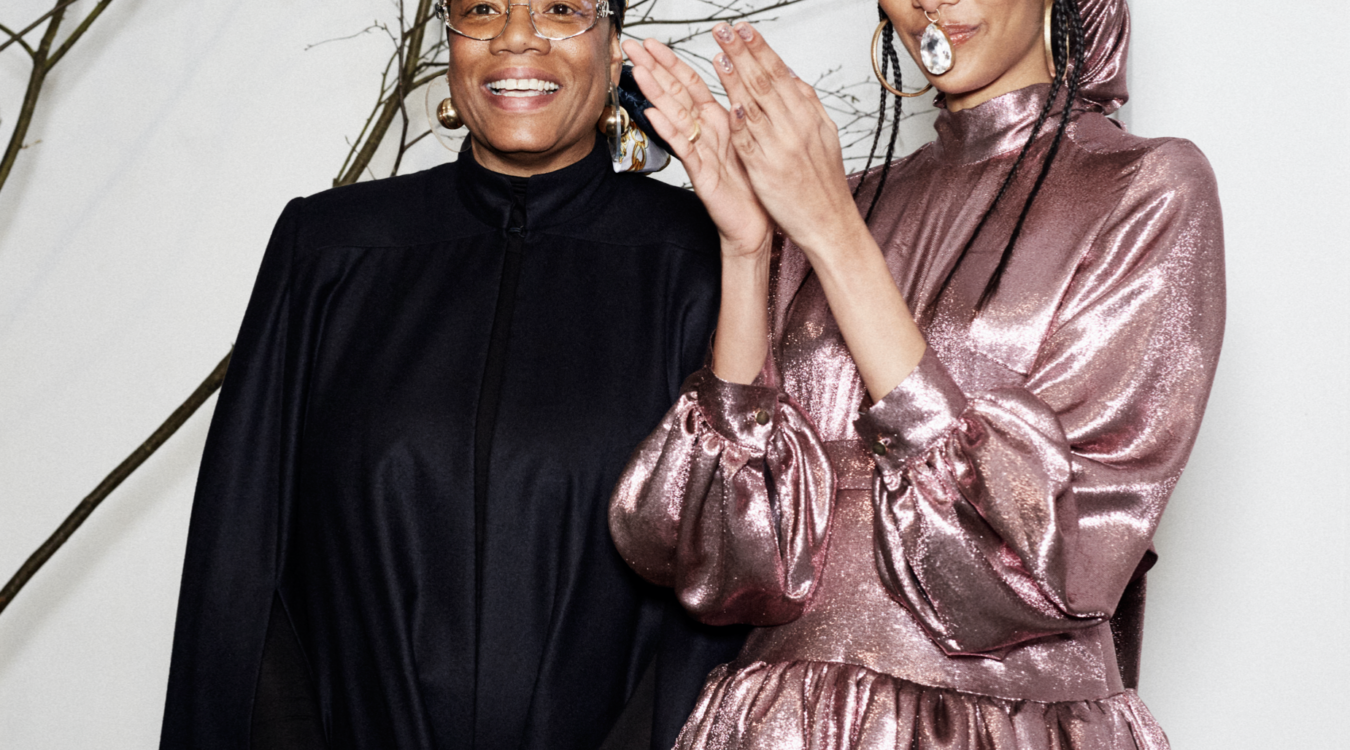 Black Women Are The Backbone of Modest Fashion

“Look around you. The rise of the Instagram hijabi blogger has swept the internet for the last decade. She is usually a size four, her aesthetic is pastels, either she wears her hijab wrapped traditionally or, if she’s a little edgy, she may even wear a loosely tied turban that she claims is so cutting-edge, when Africans have been wearing turbans for hundreds of years. She’s either a pale Middle Easterner or white-passing,” writes Leah Vernon in her memoir, Unashamed: Musings of a Fat, Black Muslim.

Vernon’s unfiltered, candidly-written memoir narrates her struggle as a woman who’s not only plus-sized and hijabi, but also Black. Both within the Muslim community and outside of it, she’s perceived as a Black sheep – which is ironic, since it’s powerful, and proudly-Black women who are the backbone of the modest fashion movement – a trend that has finally recognised female Muslim consumers as an important demographic worth catering to.

Can y’all believe it’s only a few days until 2020? September just lingered and October, November, and December was like “aight, I’m out” 😂 So, much happened good and bad. I think imma take these last few days to reflect. Not gonna front, the beginning of this year was bullshit. Ya girl was going through all kinds of changes. Moving to NY, getting played by an agent, falling back into my eating disordered patterns and second guessing my purpose. To up and move to one of the hardest cities in the world. I told myself: “If you don’t do this now, then you’ll never do it.” I cried and made excuses but I did it anyway. I hit rock bottom. Living off credit cards. Watching my account hit negative while I was still poppin on the Internet and had a whole book deal. Yup, it’s like that sometimes. Stop letting fancy photos fool you. No one knows the behind the scenes struggles. The sacrifices you make to take that photo. Write that story. Be present. Having manic depressive episodes before shoots or being dead sick but still having to perform. The loneliness of being popular. But moments like these, being invited to the @glamourmag Awards was hands down the highlight of my year. Being looked at as someone whose work in their field is important and significant to even invite. Like damn. Never thought it was possible. At the end of the day, no one owes me shit. But, the universe gives opportunity for those who are ready. What I’m saying is, stop playing it safe. Stop allowing your insecurities and what other people think/say to dictate what you do. Stop chasing after folks that don’t put you first or make the effort. New year, who dis?! How’s your year been—shit, eh, or amazing? Lol. What are some things you are definitely NOT taking into the new year? Let’s chat. #newyorkblogger #psootd #plussize #instafashion #bodypositive #bgki #honormycurves #effyourbeautystandards #fatphobia #blackgirlswhoblog #fashion #londonblogger #psfashion #blackgirlmagic #muslimgirl #bodyconfidence #plusmodel #feminist #intersectionalfeminism #turbanista #bodydysmorphia #fatacceptance #selflove #goldenconfidence #modestfashion #ootd #redcarpet #glamourwoty #beautybloggers #gowns

The call for equal treatment and equal representation is growing in volume across all fields – fashion included, especially in the case of the multi-billion-dollar modest fashion industry. Yet, even while a Black woman’s face may be plastered on magazine covers hailing the rise of modest fashion, the accompanying stories fail to mention that Black women are in fact some of the most dynamic leaders of this style movement.

The years leading up to 2020 were transformative for modest fashion – a retail category that quickly became a savvy business approach for brands seeking to attract Muslim spending power. In 2015, Mango launched its first Ramadan collection for Muslim women, and in 2016, Dolce and Gabbana debuted a line of abayas with matching headscarves. Labels like DKNY, Michael Kors, Tommy Hilfiger, Carolina Herrera, H&M and more, all released dedicated modest collections, and for the most part, white models, or light-skinned Arab women, fronted these campaigns.

Modesty’s foray into mainstream fashion is constantly applauded by those who see it as an important step towards diversifying the industry. And while in the US, the most widely-recognised face of modest fashion, Halima Aden, is a Somali, hijab-wearing immigrant, it’s never seen as a Black-led movement – instead, the industry often serves a white, Arab audience, and thus lighter-skinned faces are used in look books and campaigns.

“I think this probably stems from the narrative that Black women tend to be excluded generally. With regards to modest wear, it’s the idea that you’re dealing with the Arab market – so the woman should look Arab and like she’s from the Middle East, rather than Black,” explains British stylist and fashion designer Deborah Latouche.

Aden may have shattered glass ceilings for Black and visibly Muslim women in the fashion industry, but she wasn’t alone in her plight. Part-Moroccan British hijabi model Mariah Idrissi rose to fame before Aden’s breakthrough, when she was scouted for a 2015 H&M campaign, and has remained a powerful voice advocating inclusivity. Ikram Abdi Omar, another Black, British woman, of Somali heritage, made her modeling debut at London Fashion Week in 2018, and has since covered magazines like Vogue Arabia and starred in campaigns for Diane von Furstenberg and Burberry. Fatuma Yusuf, Ifrah Hashi, Basma Kahie, Houdan Yusuf – the list goes on. Alongside the lighter-skinned Middle Eastern fashion influencers, these women of colour should be on your “following” list on Instagram if you’re a modest fashion enthusiast.

Then there are the talented designers who have worked tirelessly to shine a spotlight on modesty. Ayana Ife, an African American designer who wears hijab, became the first modest fashion designer to star on American reality TV series, Project Runway, and went through to the final round, making national headlines in a notable “win” for the modest fashion movement.

London-based Deborah Latouche, who has Caribbean heritage, launched her modest wear brand, Sabirah, at London Fashion Week this past February. Her diverse, dark-skinned models were robed in statement silk dresses and embodied glamour and confidence – it was a proud moment for the stylist-turned designer, who for years, has strived to increase the visibility of Black women in the mainstream industry.

“I’ve worked in the fashion industry for 20 years – it’s always been a thing to have a white model take precedent over a Black model, and I’ve been told on more than one occasion that I couldn’t shoot a model because they already had one Black girl in the magazine. That’s a tough thing to be told, matter-of-factly, with no shame. So it doesn’t surprise me that that’s happening within modest wear, it’s what has trickled down, with colonialism – it’s been ingrained in the system,” she says.

Once, while on set for a shoot with a magazine that was targeting an Arab market, Latouche was told flat-out that she couldn’t use a Black model. “I think it’s a kind of ignorance within the industry generally,” she says. “Obviously Muslims are from all over the world, but when we’re looking specifically at Muslim modest fashion, they tend to want somebody who looks like an Arab. It takes steps to break that barrier, and the faces is my collection were beautiful, multicoloured women, all different shades and colours – I think that’s how it should be,” she says.

Amy Burton, the London-based founder of newly-launched label Hijab London, uses group photos for her campaign images. They feature a range of skin colours – including of course, women of colour, as Burton herself is the daughter of a Black woman. “My only role model growing up was Diana Ross – so I would like to see more diversity to reflect the diversity of consumers,” says Burton. “I think it’s important for young girls to be able to identify with the models that are selling an image. If we want girls to be happy with their image, then we have to celebrate their look as something beautiful.”

HIJABI LONDON : FAITH IN FASHION Take a look at the girls sporting our breathable cotton work out tops – perfect for all activities. Shop now💜

London-headquartered fashion e-tailer ASOS is one example of a global retailer that embraces diversity wholeheartedly. It has done a commendable job in pushing the images of both Muslim and Black women, on its website, with the inclusion of many models who are dark-skinned, hijabi, or both. For Ramadan 2020, ASOS recruited Sudanese-American hijabi blogger Shahd Batal to curate a special modest wear edit, shortly after featuring another Black, hijab-wearing model on its homepage for weeks.

Modest fashion inherently celebrates diversity, and is both consumed and promoted by Muslims – so why do we, within in the community, fail to acknowledge Black women for playing critical roles in catapulting modesty to the mainstream?

With #BlackLivesMatter having become a trending hashtag on social media, my Instagram feed is full of Arab and South Asian Muslims admitting their own communities are plagued by anti-Black rhetoric. Mafaz Al Suwaidan, a Kuwaiti journalist earning a PhD in Islam and Africa, has offered some steps towards reversing these prejudices: she encourages non-Black Muslims to understand their racial privilege, stop the use of anti-Black language, have open conversations about anti-Blackness, and prioritise Black voices in the community and leadership roles.

But I’ve come to the realization that within the realm of modest fashion, the problem is not one of melanated voices being quashed or unheard. They already are, in fact, the key voices of the movement. It’s our non-Black voices, that need to speak up, not on their behalf, but to commend, congratulate and celebrate their achievements on our behalf. It’s high time that we give credit where it’s due because Muslim women across the globe (along with non-religious women who are attracted to the ideals behind dressing modestly) are benefitting from the spotlight that these trailblazing Black Muslim women have put on modest fashion. We’re bound together perhaps not by skin colour, but by sharing an affinity for modesty, in whatever shape or form that may take, and more importantly, by our gender.

I began writing this at the end of #blackoutTuesday – a day when the global social media community came together to post black squares on their Instagram feeds and were encouraged to highlight the work of BAME businesses and creatives.

And, while I’m thrilled to finally pay tribute these powerful Black women, I can’t help but feel remorseful that after all of my years spent writing about modest fashion, it took a viral hashtag to inspire the writing of this particular story.

Read more about diversity in the modest fashion industry in Hafsa’s book, Modesty: A Fashion Paradox