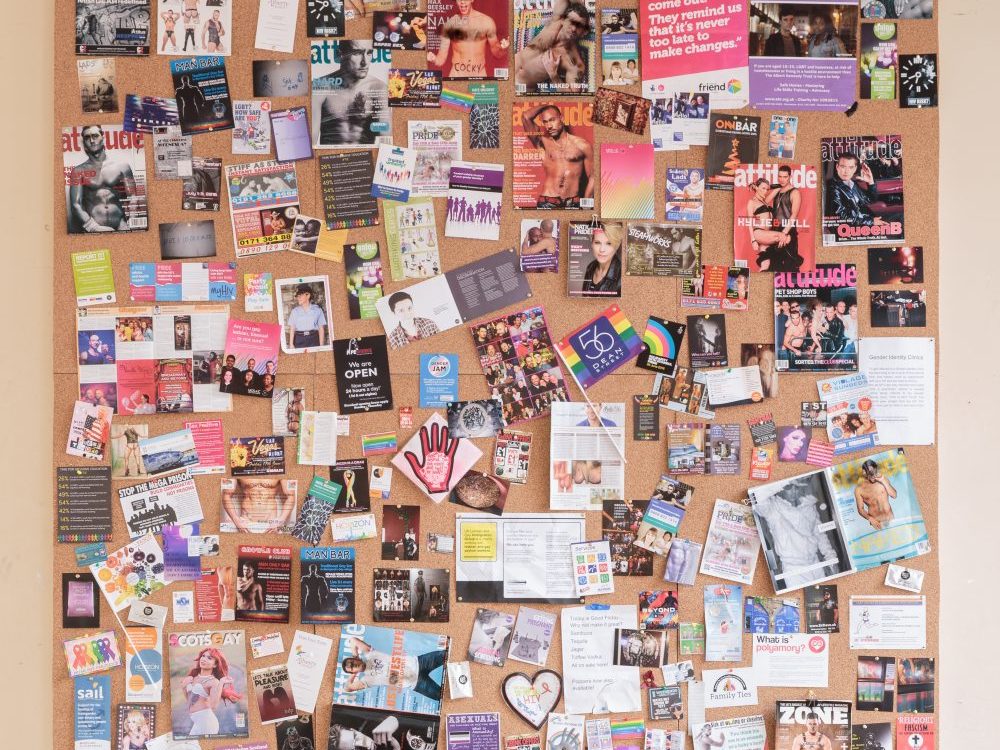 With the number of LGBTQ nightlife venues falling fast, Cornelia Prior explores a very pertinent exhibition

On a night out recently, I was struck by this feeling of being watched. I’d gone out to displace the all-encompassing emotional toll of having been in receipt of bad, no-less than world-changing, news. I wanted music so loud it hits you right in your solar plexus, lights like full moons, the olfactory hit of everyone’s perfume at once, the stop-motion swish of someone’s long hair beneath the strobe, all my organs vibrating under the skin the way they say happens just before you die of sperm whale song.

But instead – to say nothing of the airport-style ID-check, bag search, body pat-down preface – once I got inside, I kept unwittingly finding myself in the stark flash of the event photographer’s camera, or in the back of people’s Instagram stories. I know this is what going out in London is like, but I don’t like it.

There are certain other times and places where this feeling that one is being surveilled is heightened – especially as a gay, trans person. These include but are not limited to: straight bars and clubs, bathrooms, the workplace.

The continued media furore over trans lives, the vitriolic public discussion about the nature and purview of queer and trans rights, and the violence directed at the queer and trans community, all no doubt contribute to this sort of hyper-vigilance. So where can we congregate to discuss or temporarily forget The Current State of Things?

After all, between 2006 and 2016 the number of venues for the LGBTQ+ community in London fell from 125 to 53. But in the face of such violence, which is often levelled in places where queer folk are simply trying to grind or go about their business (the homophobic shooting at the Latino nightclub Pulse in Orlando and policies such as North Carolina’s recent bathroom ban both come to mind) there has been a renewed interest in the importance of queer spaces. And in queer nightlife in particular.

The Whitechapel Gallery’s Queer Spaces: London, 1980s – Today, is one such example of institutional recognition of queer sites past and present. In the Whitechapel’s archive gallery, contemporary artists and archives from ten of London’s queer centres, pubs, and bars join together to explore the locations where queer identities have been able to flourish in the city. Council documents, meeting minutes, promotional flyers, and oral histories from venue regulars are accompanied or interrupted by artwork from Tom Burr, Evan Ifekoya, Hannah Quinlan and Rosie Hastings, and Prem Sahib.

One such work that caught my eye was by artist duo Hannah Quinlan and Rosie Hastings who began filming in 170 gay bars around the UK to create their 6-hour film The UK Gaybar Directory. Along the way they collected leaflets, club flyers and memorabilia from the bars, some of which are presented as the piece Scarcity of Liberty. The piece takes the form of front covers of men’s magazine Attitude, information leaflets, posters for saunas, and other gay ephemera mounted on the kind of budget cork noticeboard you might find in a village hall or doctor’s surgery.

Although, as the artists say, ‘much of the ephemera focused on the white, young, hairless, healthy male body, creating a toxic model for what a queer body looks like’, this mix of desirous, sexy, serious, practical, and informative memorabilia does demonstrate breadth of queer community involvement. Leaflets for Time For Inclusive Education – an organisation addressing LGBTQ issues in the Scottish education system – are pinned beneath a flyer for www dot cuminyourpants dot org, a cruising night at the Locker Room in Kennington. Performers from showbar Funny Girls dance above a business card for an LGBT helpline. A hirsute ass pressed against the glass door of a steamy shower crowns an advert for J&M gay builders who can, amongst other things, help with bathroom installations.

Behind the boarded up windows of a nondescript public toilet in Lewisham, baby-blue tiles and shiny chrome urinals, toilet bowls, and sinks play host to the ghosts of last century’s gentleman gays. Ralph Dunn’s Public Toilets series documents this site of spontaneous gay desire, demolished- like so many others- to make space for so-called luxury houses or hotels.

Prem Sahib’s Helix IV is a plaster recreation of one of the classical reliefs (depicting a buff athlete praised by Nike) that adorned the walls of Chariots sauna in Shoreditch – a venue which which met a similar fate in 2016. Pierced by metal studs and rings, the piece celebrates the aesthetics of somewhere queer people came together to come together.

As documents from the Hall-Carpenter and Bishopsgate archives attest, places like the London Lesbian and Gay Centre (LLGC) didn’t always feel welcoming to everyone. One regular remembers its distinctly middle-class vibe and another, Susan Orr, recalls with shame its exclusion of trans women. The Black and Lesbian Gay Centre was the first organisation of its kind in the world and it sought to create a space that included gender non-conforming, trans, or otherwise marginalised folk where the LLGC and more commercial venues felt overbearingly white, gay, and male-dominated.

Evan Ifekoya’s Throw Rewind Body Slowly and A Net Mode of Individual Knots are both works made up of fragments. The former, a paper collage comprised of flyers and photographs from the archives of queer black social spaces, is accompanied by the latter, a sound piece in which overlapping voices tell stories of different experiences of queer nightlife the world over.

This sense of overlapping in Ifekoya’s piece finds its analogue in the reality of many queer spaces. Many of the bars, clubs, and social centres explored in the exhibition provided a place to cruise, meet, talk, and collaborate in an era when queers were particularly vilified in the tabloid press. LLGC provided if not free, then certainly cheap offices to grassroots political group Act Up. Central Station supported people sick and dying from AIDs, held space for people supporting them, and hosted funerals. The cafe First Out, which closed in 2011, was founded by young socialists who set it up as a workers cooperative.

Sure, people are always looking for places to kiki, but people are also looking for spaces in which it’s possible to imagine and agitate for better futures. As world leaders, the tabloid press and increasingly the mainstream press, push harmful misogynistic, xenophobic, transphobic and homophobic rhetoric, the existence of these spaces is increasingly vital.

Last summer on a sticky late-July evening, a tiny little queer club opened near where I live. It has retained the ecclesiastical stained glass panelling which, since its conversion from a jazz bar that served tots of wine and communion wafers at every table, has taken on a kind of high camp, kitsch energy. It does feel kind of holy, though. At least as miraculous as transubstantiation. I’ve been to celebratory evenings where performers have danced Bharatanatyam in drag, a top surgery fundraiser, evenings that feel more like performance art than they do music, and a night where the DJs exclusively played Robyn.

This little bar is not by any means perfect- but it’s open and it’s openly queer – and when you walk out late at night the heat from the dance floor rises like a flower defiantly poking up between the pavement slabs.