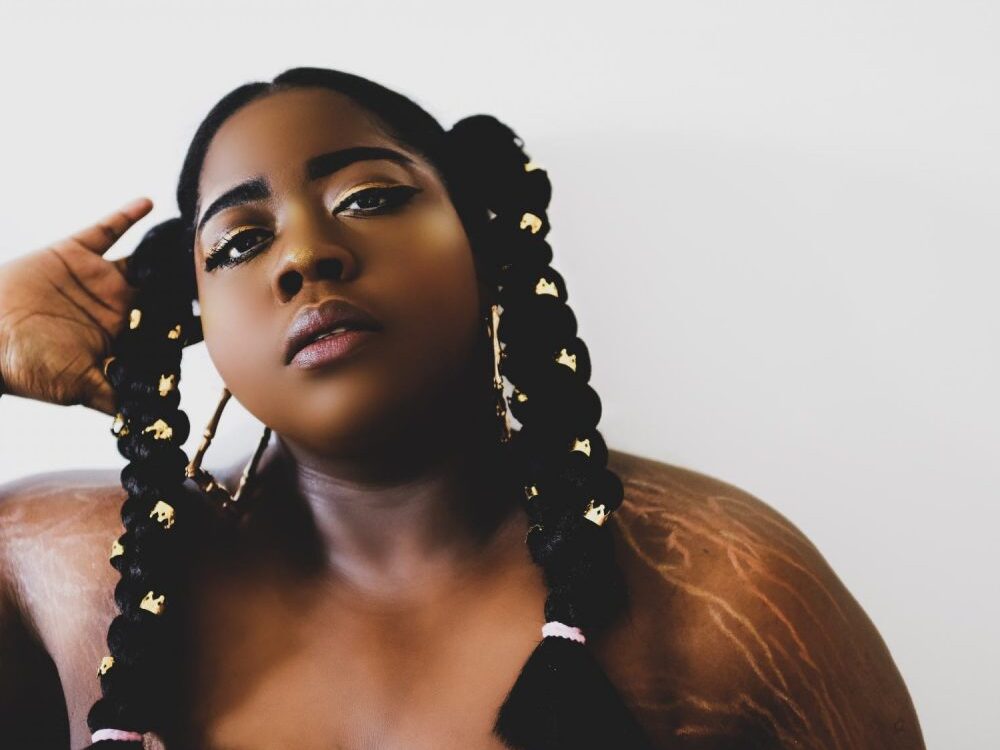 Stephanie Yeboah on writing Fattily Ever After

In what she describes as a key milestone in her career and personal self-acceptance journey, Stephanie Yeboah’s first book, Fattily Ever After: A Fat, Black Girl’s Guide to Living Life Unapologetically, is out in all good bookstores this month. After blogging for 12 years and spending so much of her time celebrating plus-size style and actively campaigning for fat acceptance and positive wellbeing, it feels like a long time coming.

As she describes it, this book is a culmination of everything she’s learned and wants fellow fat women of colour to understand about love, careers, the mind and body, and more. Restless sat down with Stephanie Yeboah to discuss her new book, the process behind it, and the impact she hopes it will have.

Can you tell us a bit about how your online career began?

I started my blog in 2008 when I was in university. At the time, I started it as a way to just bitch about my university course, because I studied law.

After about five or six months of using blogging as a place to talk about my friends and tutors, I started discussing skincare and beauty. I’d always had a huge fascination with fashion and style, but I was so insecure about my appearance at the time and there weren’t a lot of plus size stores carrying the type of fashion I wanted to pursue. Unfortunately, for that reason, I stopped doing a lot of beauty blogging for a long time.

That changed in 2013 when I went to New York for a couple of months. I suffer from depression, and I was just tired – I needed somewhere new for a bit. I was staying in this apartment in the city, above these women who were living downstairs. They were all plus size but were so unapologetic in how they presented themselves. They were very confident, bold and loud. The clothes they were wearing were pieces I’d always dreamed of wearing. I would chat with them every night when coming home and talk to them about confidence. After that, I started reading blogs by plus-size American influencers like Gaby Fresh and Nicolette Mason. I started to gain a bit of confidence and felt like I could show my fashion.

Coincidently, I came back to the UK as ASOS’ Curve line dropped. I was like ‘Oh my gosh, this is clothing that I can wear and it’s affordable!’ Most importantly, it was current. It wasn’t the empire line shapes and butterfly prints fat people had been told to wear for ages.

That’s how my fashion blogging career started rolling. But I realised I had so much internal work to do on my self-confidence and self-esteem.

Because I was so used to suppressing my feelings, the only outlet I thought I could express myself with was through writing. All the things I would write in my journal started posting to my blog instead. That’s how I started using my blog as a way to express how I felt about my body and mental health, my eating habits and all these other feelings I had. I started using Instagram and Twitter to talk about body positivity and fat acceptance and the topics I felt needed to be spoken about.

I honestly didn’t expect other people to resonate. But, I think because I was very unapologetic, people started to follow me and discuss those things with me. A lot of journalists and editors started following me and eventually asked if I could write columns for papers.

That’s how freelance writing began for me. Before, I was writing on my blog, and by 2018 I was writing for a few outlets and working in a host of different jobs. When I was made redundant from my 9 to 5 role in late 2018, I decided to make the leap and start writing for my blog, social media content and doing public speaking gigs full time.

One of my favourite things about following you, other than your amazing content, is the wonderful community of like-minded women you have championing you under every post. Is Fattily Ever After kind of your way of giving that spirit back?

Kind of, yeah! Growing up, I didn’t really have anyone to look up to in the media. I didn’t see people who looked like me. I saw plus size women, but not Black plus size women. That was an unfortunate thing growing up. Even when we had those people on screens, it was always negative. When I watched movies, plus size Black people played the maid, the nanny, or the sassy best friend. They didn’t have character arcs, and I didn’t see successful, fat Black women. I didn’t really have any inspiration. I had to rely on myself and trust myself to push through [insecurity] and become as confident as I can.

Nowadays, I do think it’s become a lot better. We have people like Lizzo, who has revolutionised and galvanised the fat community. She’s such an inspiration for what plus size women can do. But I know that there are still so many young women out there who don’t feel like they have representation.

So, I love having this community of women who have the same sense of humour and the same struggles and I think it’s really important. For me, it’s nourishing to have that community because growing up, I had no friends whatsoever. I didn’t have a group of friends, I was being bullied, and I was very introverted. So having a community, even if it is people that I will only ever talk to online, has been so great.

I know I’m not alone anymore.

There’s a whole bunch of us sharing about our issues with self-esteem, or being shaped a certain way, or about men. I know I’m not alone anymore. It’s great having those women to talk to, share problems with, and to have a safe space where we celebrate our fat Black bodies.

Can you walk us through what to expect from Fattily Ever After? Will it be mainly personal stories, or are multiple perspectives involved?

The book is not just a love letter to fat Black women (something that is so long overdue), but it’s also a way for me to shed some educational light for people who may not necessarily fit into the fat Black demographic, but want to learn more about the history of body positivity, where it came from, and how it impacts different people in different ways.

I have written the book specifically targeted towards fat Black women, simply because I still feel like – even within the realms of body positivity movements – Black women are grossly underrepresented. Not enough people know that the positivity community was created by a Black woman. And despite this, we’ve been completely thrown to the wayside in favour of this new body ideal that’s been created within body positivity. For the most part, that’s a white hourglass shape (maximum size 16) with a flat stomach. Ashley Grahams and Ishka Lawrences became the faces of body positivity while neglecting people of colour, disabled people, and fat men. These other demographics are still deemed to be undesirable by society. I just think it’s important to kind of talk about the history of body positivity and let people know we aren’t a monolith.

When you add being Black on top of that, there are assumptions that are made about you

In the book, I’ve included some horrific stories that have been shared by plus-sized Black women. Not only are we demonised for being fat, but there’s a racial a lot of people seem to forget. It’s especially prevalent in things like dating. I’m only speaking from my experience and the other women who’ve been able to open up to me, but dating is hard as a plus-size woman. When you add being Black on top of that, there are assumptions that are made about you. People assume we must be dominant, or aggressive and sterile. And all of these other really damaging stereotypical traits of Black women that are put onto fat women too.

The biggest chapter in the book is the dating one. There’s this issue of desirability, where a lot of fat people feel like we aren’t enough. We feel like we are equally invisible and hyper-visible. Visible to those who don’t like us, but invisible when it comes to dating. Sometimes, fat women feel like society doesn’t give a shit about us. That can lead to us trying to overcompensate, or lowering our standards, and having terrible levels of self-esteem. While not every fat woman has this experience, I think it’s important to note that a lot of fat women struggle to find love and be in a relationship without being fetishized, humiliated, or just plain ignored. We just want to be seen as normal. And we deserve the same amount of love and respect and human decency as everybody else.

I thought it was incredibly important to give us a platform to share those stories.

You’ve said before that this book was within you for a long time. Was there a flip switch moment, for you, where you realised it was time to release it into the world? 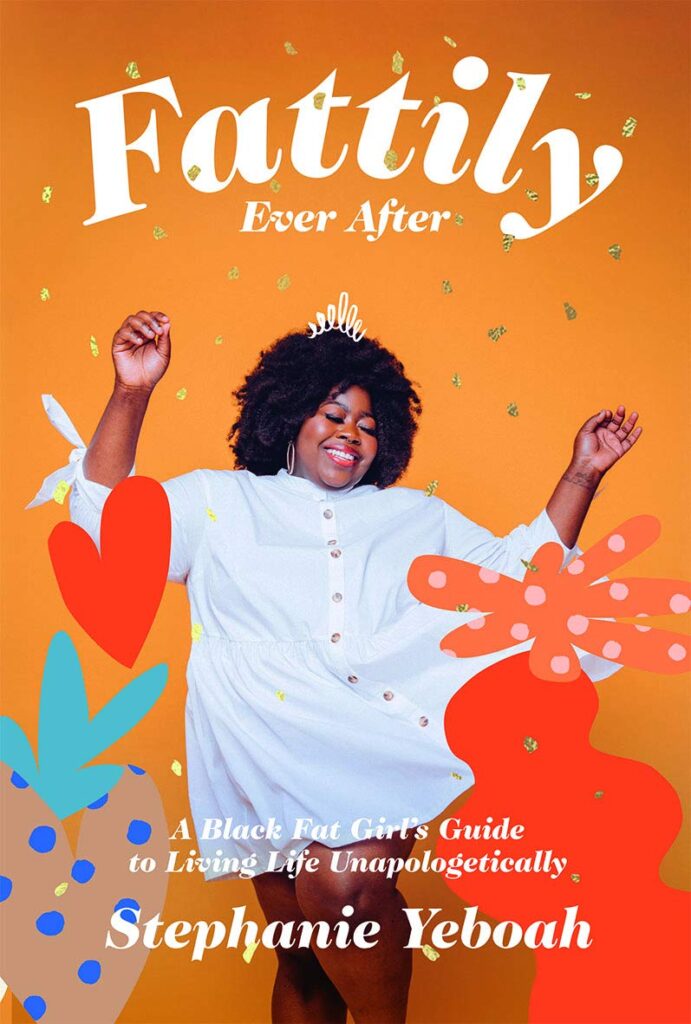 I think that the feelings I had around how I’m treated, and how fat Black women are treated in general brought me to that point. These are feelings that have been brewing for a very long time. Gosh, I probably started having those thoughts a lot around 2012.

Over the past 18 months, it’s taken up steam. I noticed that in my writing, I kept bringing up this subject. I kept writing about race, bodies, confidence, self-esteem. I couldn’t shake this knowledge that there are certain demographics in society who are inherently treated worse.

It was bubbling up, and I thought “okay, shall I write another blog post on this or should I write something with a longer form?” I decided to start writing bits and pieces with the idea to form it into something concrete. I was later approached by an agent, who asked me if I’d ever thought about writing a book. I said “yes! I actually have, and I have the beginnings!”. It all came together so seamlessly. I feel very fortunate that It happened this way.

Not only am I so excited about Fattily Ever After, but it feels like there’s an excitement from the publishing world and people in the media too.

It’s a lovely thing to know that people actually want to learn about fat, Black women and what our experiences are.

Grab your copy of Fattily Ever After.

More from Interviews , Obsessions
See All 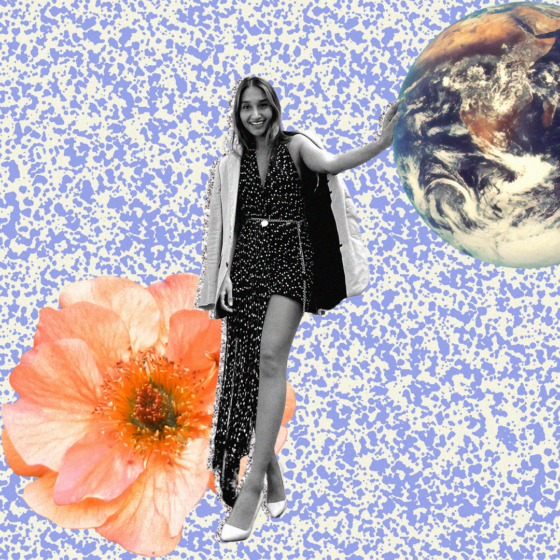