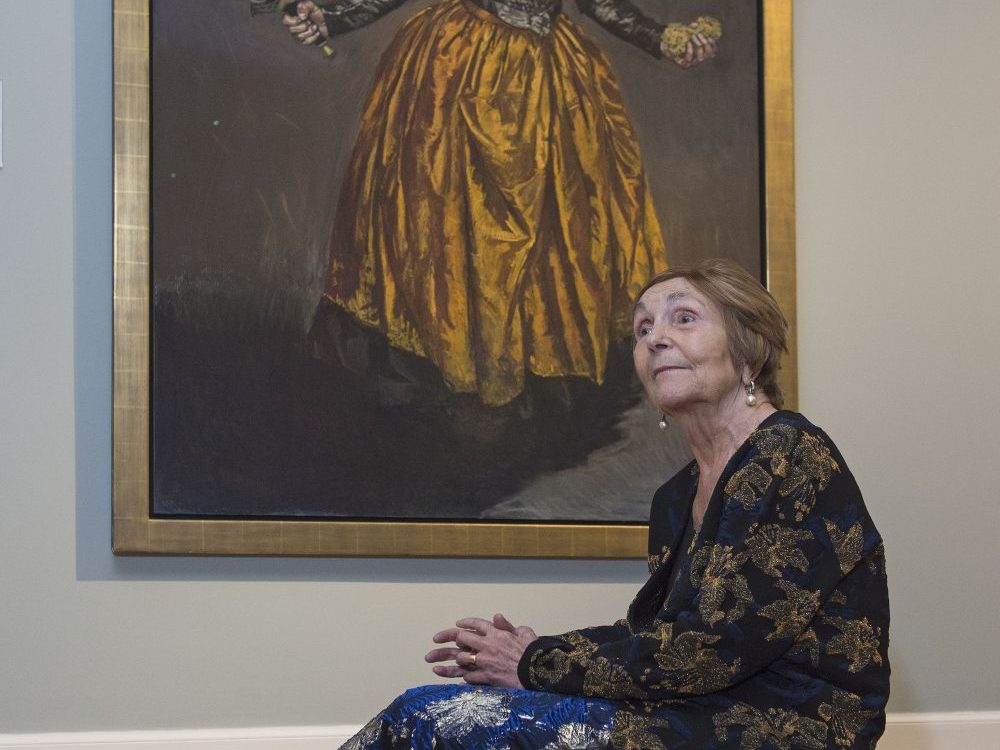 The Artist Who Painted Abortion Into Law

From FGM to birth control to women’s role in society, the unflinching work of Portuguese artist Paula Rego holds a mirror up to us all. Restless meets the rebel herself…

To age, as a woman, is so often presented as to lose power. To be current, we are told, to be relevant and timely and hard-hitting, to be provocative or controversial or entertaining even, a woman must be youthful, preferably beautiful, mostly well-behaved.

It is no coincidence, therefore, that the current retrospective of the work of Paula Rego is entitled Obedience and Defiance. She has, after all, spent her career examining the role of women in society through a fantastical lens. What is more surprising, however, is that she was in her 60s when she started tackling the subject of abortion, her 70s when she took on FGM and at 85 – “Retire?! And do what?” she asks in horror when I query her plans – appears more current than ever, with a major new retrospective in the works at the Tate Modern as we speak.

Having made its debut at Milton Keynes’ MK Gallery, where it was curated by Catherine Lampert, Obedience & Defiance is currently on show at the Scottish National Gallery of Modern Art and in June will move to Dublin’s Irish Museum of Modern Art, where one can only imagine her Abortion Series will appear particularly of the moment.

That it feels like a political statement made in pastels is no accident. Rego created the series of portraits, portraying women in the moments directly following an illegal abortion, in response to her home country’s 1998 rejection of legalisation. So hard hitting were the works that Portugal’s leadership credited her influence on public opinion when they eventually legalised abortion following a second referendum in 2007, a moment, she says, that made her “very proud.”

“Women have always chosen abortion, but they couldn’t do it safely. Women suffered and died. I was campaigning to make their choice safe,” she says now of the works. “At the opening, people looked at them sideways and critics talked about the colours of the work and the technique, but didn’t mention the subject matter. Then the public came, and the women knew. Of course they did.”

Was it hard to speak publicly about having undergone illegal procedures yourself, I ask? No, she says, because she first spoke openly while appearing on camera in a documentary made by her own son, BBC’s Secrets and Stories, so “that wasn’t difficult. I think people always knew these things happened. And the women identified and were kind.”

Indeed, while the works are challenging and visceral, they are quite deliberately lacking in gore and the overall feel is one of quiet resolution.” I didn’t want to show blood because that wasn’t the point. The women knew what they were doing and felt determined.”

The result is a series so confronting that when the collection arrived in Scotland, its co-curator, Alice Strang, consulted with leading gynaecologists in the field to ensure the team could “interpret and present those works in a much more intelligent and properly-researched way”.

“I think what Paula Rego does is, with real courage and an unflinching gaze, she examines some of the toughest, cruellest, most traumatic experiences that a woman can go through – such as an illegal abortion – but she does so in such a way that the result is us feeling inspired and empowered,” she explains. “In the Abortion Series, the women have such extraordinary expressions. There’s sadness and trauma there, but also a stoicism and a strength that underlines women’s amazing resilience and bravery. So, the subject matter is tough, but the result is you think how women can cope with this, and still thrive, and still flourish.”

I was told not to mess with other people’s cultures, but women have the right not to be tortured and mutilated wherever they come from.

One might expect that, following her homeland’s change of heart, Rego could justifiably hang up her feminist hat and relax, campaigning work done. Instead, she found herself turning to a subject she had become increasingly aware of while working at her studio in North London – female genital mutilation. “The truth is ghastly,” she says of FGM. “Grandmothers and mothers have their children mutilated. They hold them down. I was told not to mess with other people’s cultures, but women have the right not to be tortured and mutilated wherever they come from. It’s obscene.”

“Rego has been politically engaged throughout her career and, despite being in her 70s, when you think people might disconnect a little bit, she was horrified to learn what the practice of cutting involved,” Strang elaborates. “She sees that series as a natural continuation of the crusading aspect of her abortion works, in that she considers it a horrific, entirely unjustifiable practice against women and girls. She has stayed relevant and current with issues that affect women as they develop and become prevalent in the UK.”

This forthright nature is perhaps less surprising when we consider that Rego was born in Portugal in 1935, raised under a fascist regime that eventually prompted her father to declare his homeland no place for a woman and pack her off to London’s Slade School of Fine Art. “It was a very repressive regime,” she explains. “People were kept in poverty. We were told not to speak our minds. People didn’t trust anyone. The government lied all the time. Women were the property of their husbands and fathers, and the state could do what it liked. Imprisoned people without trial, tortured them. My father was against the dictatorship, though he had friends who weren’t. His father was political too, an anti-monarchist who celebrated when the King went into exile. None of us were fans of authoritarianism. I painted pictures about the dictatorship because that was the world I was living in. They didn’t seem to notice.” And what of her politics now, at 85? “Well. I think Brexit was a very bad idea…”

If there is one over-arching theme of Rego’s work, however, it is her total lack of acceptance of the idea that women must behave in one particular way. Played throughout her work, this exploration of a woman’s role is perhaps most vivid in the Dog Woman Series, in which she reimagines herself as man’s best friend, questioning the relationship between man and woman, husband and wife, the expectation of unquestioning loyalty from one trained to respond to command.

“Rego challenges notions of what it means to be ‘a good girl’,” is Strang’s summary. “I think she is an extraordinarily talented artist. Her creativity, her imagination, her courage, her integrity and her honesty in depicting the unpleasant, the traumatic, the uncomfortable and the humorous truths of what it means to be a woman in society are all there, packed in with her abilities to set a scene, to tell a story, to suggest and to play games with us in order to encourage us to think and to understand more.”

But while we, her viewers, may be left ponderous, at 85, Rego appears a woman who has very much found her place in the world – and has no intention of giving it up and going quietly into retirement any time soon. After all, it is through her work that she feels most alive. “Painting pictures is the part of you that’s a man,” she told her son. “It has the push, the thrust. Having babies and playing at house is… play acting. While doing a picture, you are being yourself.”