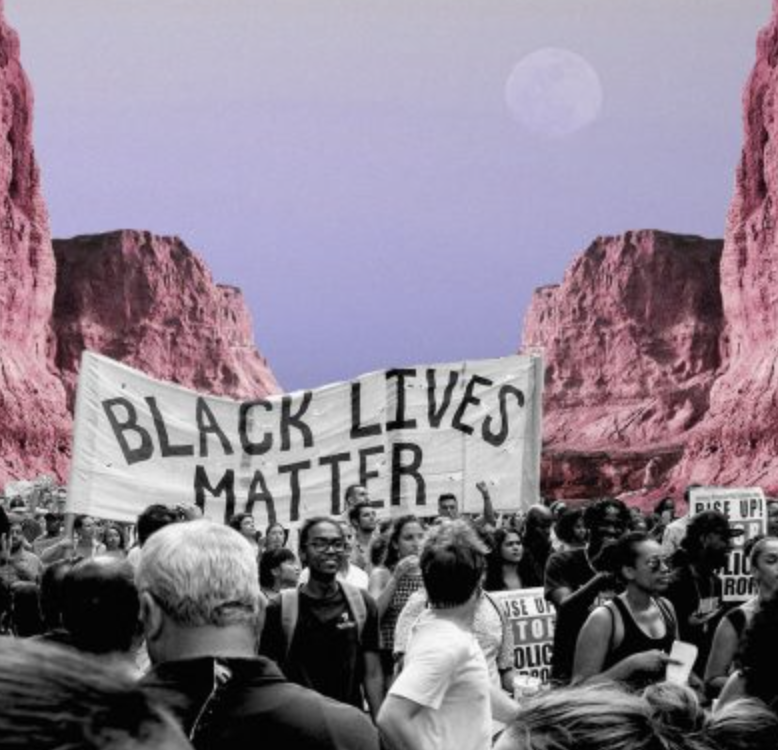 If you don’t follow them, ‘This is America’ was the caption of Khloé Kardashian’s first Instagram post addressing the murder of George Floyd. Kylie Jenner posted a Martin Luther King Jr. quote. Kim Kardashian West posted a small declaration with a byline – ready for sharing – and a selection of hashtags.

She explained, “I always tried to find the right words to express my condolences and outrage, but the privilege I am afforded by the colour of my skin has often left me feeling like this is not a fight that I can truly take on my own.”

From a powerful family of women who have enhanced their bodies with the fetishised features of black women, who have been accused of stealing ideas from small indie black designers, who edit their pictures to look darker, who unapologetically flaunt braids and cornrows, who now mother mixed-race children.

Only now, they’re too white to fight.

The Kardashian-Jenners are beyond the point of this article, but I thought it was worth mentioning.

There is something performative about the world’s response to a crisis when it’s watched through Instagram. This weekend, my feed and stories exploded with people engaging with the cause, communicating their shock and anger at the tragedy, expressing their guilt about their white privilege, sharing footage of George Floyd being kneed to his death by police.

As jarring as the idea of a trending tragedy may be, it needs to trend to make noise. Only through the noise has any progress historically ever been made.

That said, I do find the extent of the shock that George Floyd was murdered to be surprising. To me – and surely to anyone that knows anything about American History – the incident is sad and depressing but near inevitable in the environment that enabled it.

Think about the bushfires in Australia from November 2019. While they raged around the country, the conversations were not around shock at how they came to be. Australia has a fire season; owing to global warming, temperatures have been rising alongside a long drought. Adding high winds to this mix, fires on that scale were a tragic but likely consequence of the natural environment.

This is not a shock

To understand why George Floyd’s murder is not shocking, we should look at the environment that caused it. Slavery in America was abolished in 1865 after the civil war (based on slavery) was won by the Northern United States. Before this and by 1804, the Northern states had all already passed legislation to abolish slavery, but it remained in the South for a further 60 years. The size and disjointedness of America is the first factor to be mindful of.

Secondly, unlike in the UK where the majority of the slave trade took place in the country’s empire, slave plantations in North America were mostly on home soil. Changing someone’s status from slave to citizen is a huge social change that cannot take effect overnight. Hence less than 100 years after abolition, the civil rights movement took place where, in the Deep South especially, the Ku Klux Klan, segregation laws and violent discrimination were still occurring.

Now, here we are again, less than 60 years from the Civil Rights Act of 1968 and we expect for there to be no trace of the discrimination in the justice system that so recently had segregation and discrimination written into legislation?

“Despite only making up 13 per cent of the US population, Black Americans are two-and-a-half times as likely as white Americans to be killed by the police.” And this is all over America. George Floyd’s death is sad, it is unjust, but it is a direct consequence of the environment.

This is not America

Before any of us goes to approach black friends, family or acquaintances to try to sensitively ascertain what to think of this or how to react, I think it’s important to question whether race is universal.

However unfavourable this next observation makes me, these were my honest and immediate thoughts when I watched a full version of the George Floyd murder video that started with the police approaching the car:

I struggle to believe that everyone who has shared a post about their white privilege or about how they plan to educate themselves to understand these issues took a moment to reflect on their own potential bias.

As an English person who has spent an extended period of time in America, race relations were a shock to me, especially in the Deep South, but I recognise that unconscious bias is at play here. Despite being a mixed-race woman with active views and close experiences of racism, this incident is far outside of my sphere of understanding. Of course, the UK is on no high ground: since 1990, 1,741 people are reported to have died following contact with the police in England and Wales and policies like Stop and Search carry with them disproportionately high statistics when it comes to ethnic minorities. And, that’s without considering Windrush or Grenfell.

But, the UK police don’t carry guns. This makes murders that seem so frequent in North America feel slightly distanced from the UK. Incidents that are so visible and overtly criminal on the side of the US police sometimes seem more foreign than they should, which I think is why our reactions to them are often hollow shock.

It’s very difficult to view and comprehend something that is outside of the frame of your own experience.

It’s even more difficult to admit that you have any unaddressed unconscious bias in the height of what looks like a civil rights movement.

It’s really important that, alongside sharing information, sending money to charities, admitting our privilege etc., that we’re also just taking a moment to reflect and to breathe. Sharing a post that you might forget about in a week or that’s packaged between pictures of your Depop account and your recent bike ride is not enough.

Blind spots are called so for a reason, and uncovering them can take a long time. When you talk about George Floyd, don’t just describe the incident as ‘terrible’.

Engage with what led to it, address the distance between us and America and see the big picture – the issue is not the single components but the whole environment of America’s rotting justice system.