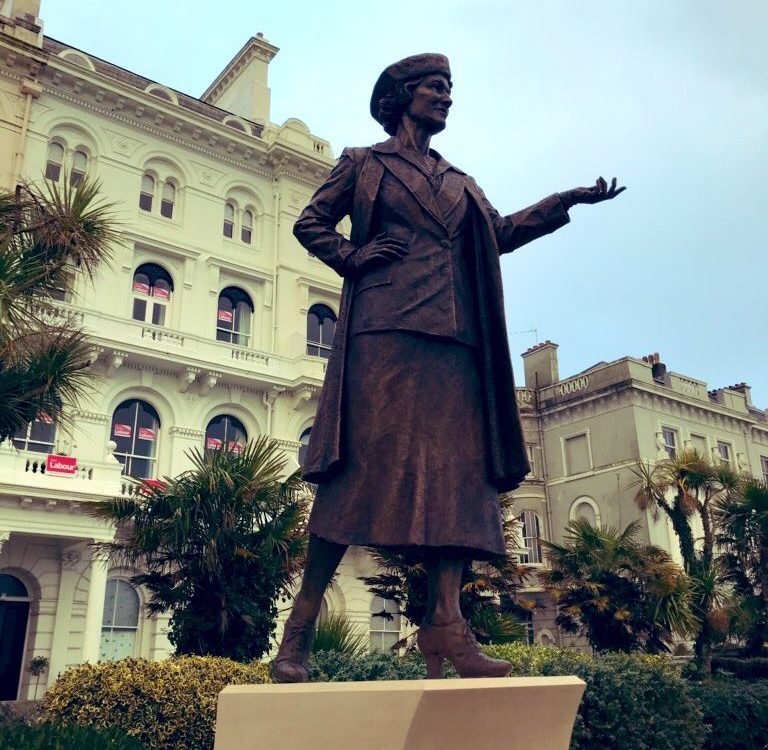 Set in Stone: Why We Need More Female Statues

On 28 November 2019, Plymouth unveiled a contentious statue of Lady Nancy Astor, the first female MP to take her seat in the House of Commons. Her statue joins the growing list of visible women celebrated in public art. I spoke to three of the female sculptors involved to find out why redressing the balance matters.

“We need more statues of named non-royal women, rather than women as allegorical figures, naked and draped at the feet of noblemen,” says Hazel Reeves, whose sculpture of Emmeline Pankhurst was unveiled in Manchester last year. “The campaigner Caroline Criado-Perez analysed available figures and revealed there were more statues of men called John than there were of named women. In fact, named non-royal women made up a paltry 2.7% of statues – that’s 25 statues. This was the rallying call.”

“It is so important for real women to be visible and championed for their achievements other than their physicality,” agrees Hayley Gibbs, who has created the Astor statue. “In recent years the voices of women have risen in the media, with equality and representation taking centre stage in many industries. I think there has been a realisation that this inequality is even in the very fabric of our towns.”

Criado Perez started a campaign to have a woman in Parliament Square. As a result, Gillian Waring’s statue of Millicent Fawcett was unveiled in 2018. If you visit the square you’ll see people clustering around Fawcett. Sometimes purple white and green flowers are left by her. The statue is telling a story people are interested in.

In Manchester Reeves’ statue, affectionately known as Our Emmeline, was also unveiled in 2018. Instead of a plinth, she stands on a bronze pub chair, raising her just above the heads of the crowds she once addressed in the city. “It was an incredible, joyous atmosphere,” says Reeves of the unveiling. ”We marched into St Peter’s Square alongside 1,000 schoolchildren to join the 5,000-strong crowd.”

Women in the public realm are still challenged and challenging

When campaigning, Pankhurst was often barracked for daring to raise her voice in the public realm, just as current campaigners face mockery, abuse and worse. Astor faced scorn in the House of Commons. Critics rightly challenging her anti-semitic views did so by calling her ‘a whore of a chorus-girl’, attacking her gender.

The parallels between then and now is what drew Gibbs to the Astor project. “One hundred years later women are still under-represented in all levels of government and broader leadership roles. There remain synergies between what she experienced and needed to overcome and the challenges that impact women today.”

Manchester and Plymouth are both highlighting their famous, ground-breaking women but it’s still not the case everywhere. Sculptor Ama Menec is working to get a statue of Anne Lister, aka Gentleman Jack, raised. She started in Halifax, Lister’s birthplace. “There’s the most incredible dishonouring of her. When I started this, they had not put up anything and the only relevant thing was her gravestone. It’s in bits with her name removed and nowhere near her body.”

Halifax did not agree to take the statue, and instead it is due to be positioned in York, at the site of Lister’s school. Menec believes her sculpture will be the first representation of an out lesbian woman in the UK, if not in the world.

“As far as British sculpture is concerned not only do women only exist in small patches here and there but lesbians don’t exist at all.”

Bronze lasts: the statue of Anne will outlast Shibden Hall where she lived. That also means bronze costs. Menec is working to secure funding but has been turned down by the Arts Council three times. The Astor campaign is currently crowd-funding not to pay for the statue but for its upkeep.

Can the statue trend continue?

There’s no shortage of other women who could be celebrated. Both Menec and Reeves have long lists and are interested in sculptures of groups. “It is rare to see working women celebrated in bronze,” Reeves says about the Cracker Packers, her sculpture of two biscuit factory workers in Carlisle. Her list is very much underpinned by her passion for telling of struggles for social justice and women’s rights. Menec’s list has twenty ground-breaking lesbians on it. “I’d also like to celebrate lesbian feminist groups whilst they are still alive,” she says, “such as the women who founded the Silver Moon bookshop.”

In the first industrial revolution, there was a trend for cities to build grand town halls. Regional architecture across the north contains many astonishingly impressive civic buildings. The authorities were keen to celebrate their achievements, their power and their money. But once a city had its status symbol, it didn’t need another. What if statues of women are just another trend in public celebration?

“The thing with trends is they can expand,” says Menec. “It’s not just more statues of women that’s happening, it’s more honouring of black history. The LGBT side of things is yet to catch up.”

Reeves sees the statues as catalysts, not an end in themselves. “I wanted Emmeline to stand as a reminder not only of progress achieved but of all the work left to be done. That’s why I dedicated it to our modern-day Emmelines, who are tirelessly working for women’s rights, and to the future generations of Emmelines.”

Gibbs agrees the permanence of the statues is key. “It would be fantastic if it became a normal occurrence to see women being celebrated for their achievements in public spaces and for future generations to grow up with strong, intelligent passionate women as role models.”