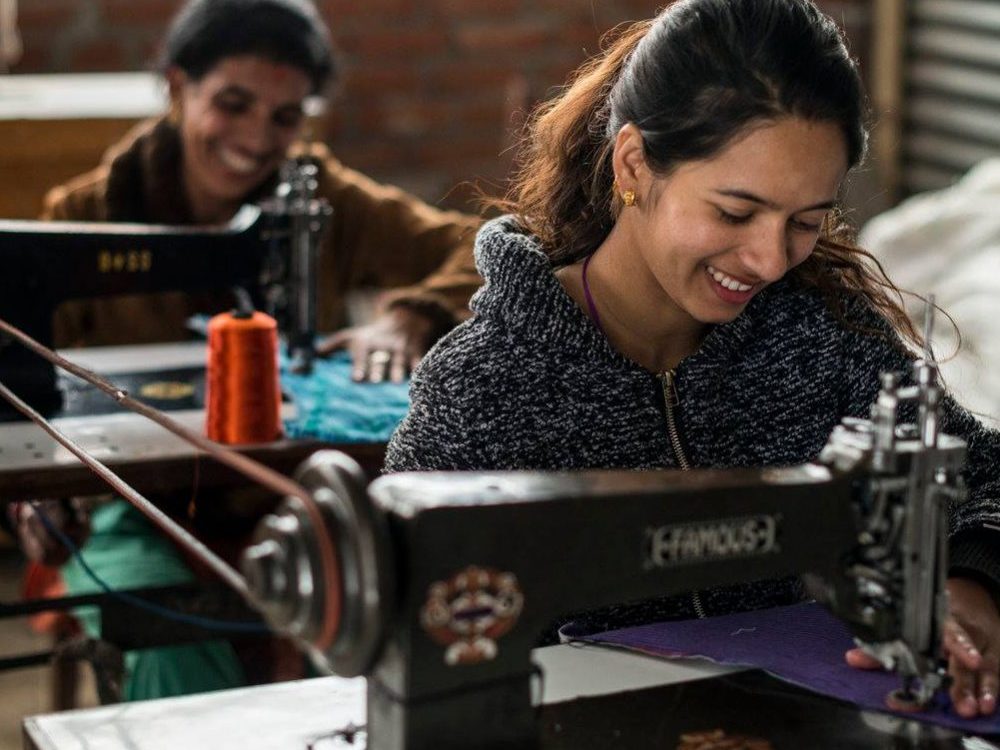 Who Made Your Clothes?

“I don’t even know how old I am. I might be 28, 29 or 30. I don’t know exactly,” Nasreen Sheikh says. Many rural villages in the Indian subcontinent aren’t registered or officially recognized. They aren’t mapped. Nasreen belonged to one of those. She was born in a village near the Nepali-Bihar (India) border.

When Nasreen was a small child, she saw one of her aunts being killed by the village men. These so-called honour killings are rooted in patriarchal ideology. About 5000 women around the world – who are perceived to have brought dishonour to the community – are murdered by their own family (mostly male) members. These murders take place as an effort to reclaim the family or community honour. Just after her aunt’s murder, Nasreen would see another aunt set herself on fire. “Abuse was normal. It was a highly male-dominated society,” Nasreen says. Soon afterwards, her elder sister was forced into marriage. Terrified by these events, Nasreen left her home for Kathmandu with her cousin.

In Kathmandu, Nepal’s bustling capital city, she and her cousin started working in a sweatshop. “I was about 10 at that time,” says Nasreen. Sweatshops are small, cramped rooms with poor living conditions where workers are employed at very low wages for long hours. In other words, it’s modern slavery. “It was a 10×10 ft room. There were six of us, including two children.”

For two years, the sweatshop became her home. For two years, Nasreen didn’t know there was a different world outside her confined room. She would work seven days a week. On many days, little Nasreen would wake up at 3am and work until 10pm to complete bulk orders – sometimes, 500 t-shirts a week. “Each of us was paid $2 per day, and if we failed to complete it, there was no pay,” Nasreen says. The work involved no legal contract.

Inside her sweatshop, there was no access to clean drinking water. She received boiled rice and lentils for dinner. “We ate, slept and worked in this tiny room. Sometimes, my bowl of rice was mixed with loose threads and fibres.” In cold Kathmandu winters, Nasreen would look for warmth in a bundle of the cotton t-shirts she made during the day.

More than 12 million people every year are forced into slavery. Furthermore, about 250 million children in the developing world, between the ages of 5-14 work in these sweatshops. 85% of sweatshop workers are young women between the ages of 15-25. These numbers are worrisome, but Nasreen says the issue is bigger than the statistics. “I was not documented. I didn’t have a birth certificate. And in Nepal, my case is very normal.”

Sweatshop work is highly repetitive. It is the same colour, same design, and the same t-shirt being made hundreds and thousands of times. There was no window inside Nasreen’s sweatshop, which was filled with chemically-treated garments. “I was suffocated. Tears filled my eyes often, and I used to wonder, who are these people wearing the same design again and again?” Her voice breaks: “I would get angry at the t-shirts and think, whoever you are wearing it, I hope you can feel my pain.”

In 2015, Nasreen visited a department store in the United States for the first time. It was only then she realized who bought her clothes. She is now writing a book, and a documentary is in production, which will be talking openly about the negative side of the apparel industry.

Her life changed when the sweatshop closed down after the agent ran away with their salaries. Unpaid for two months, Nasreen decided to head back to her village. “But before that, I wanted to see Kathmandu. I walked outside for the first time in two years.” Nasreen would sit on a staircase and look at the children her age. Dressed in their school uniforms, they would chatter and giggle with each other. “They looked happy,” she says.

“As I was sitting there, a dog sniffed me. I screamed. I was scared of dogs because it was forbidden to touch dogs in my village.” Behind the dog was Nizamuddin Sheikh. The American told Nasreen not to worry. “It was the first time I heard caring words. I grabbed his wrists with both my hands and asked him – uncle, can you please teach me?” Nizamuddin agreed.

For years, he was her teacher. He gave her his last name and registered her birth. He supported Nasreen and her cousin. After a long struggle, Nasreen acquired a loan to rent a place and buy raw materials. Nasreen and her cousin would work hard and make bags, pouches and garments. These items were then directly sold to a shop in Kathmandu. “It was still very low pay, but instead of $2, I was paid $5 and it made me realize I was exploited in the sweatshop,” Nasreen says.

One morning in the vegetable market, she heard a woman speaking in her native tongue, which was only spoken in her village. The woman was called Reetha. Pregnant, abandoned by her husband, and afraid of being honour-killed if she returned to the village, Reetha had started begging on the streets of Kathmandu. Nasreen gave her shelter and food and taught her how to sew. Reetha would quickly learn, and so the three of them would make new designs. With the money they earned, Nasreen opened a small shop in a rented space.

“Seeing how Reetha progressed motivated me to help other women,” Nasreen says. Soon one woman became three, and then 10, 18 and 22. With the loan given by an Australian tourist, Nasreen opened up her own shop – Local Women Handicrafts. She was 16. Today, this fair-trade sewing collective has trained 200 women. She also founded Empowerment Collective in 2015, which provides women with skilled training and education. The initiative aims to support 10,000 girls and women in Nepal by 2025. Nasreen wants these women to be financially independent and become successful entrepreneurs.

“When you help one woman, you don’t just help her, but you empower an entire community,” Nasreen says. “I want people to ask questions. I want you to ask where your clothes come from. I want you to learn.”

Nasreen is now a public speaker, creating awareness about the dark side of the fashion industry and child labour. “Behind the t-shirt you love are the tears of a child. If you don’t ask questions, if you don’t learn, you consume suffering.”