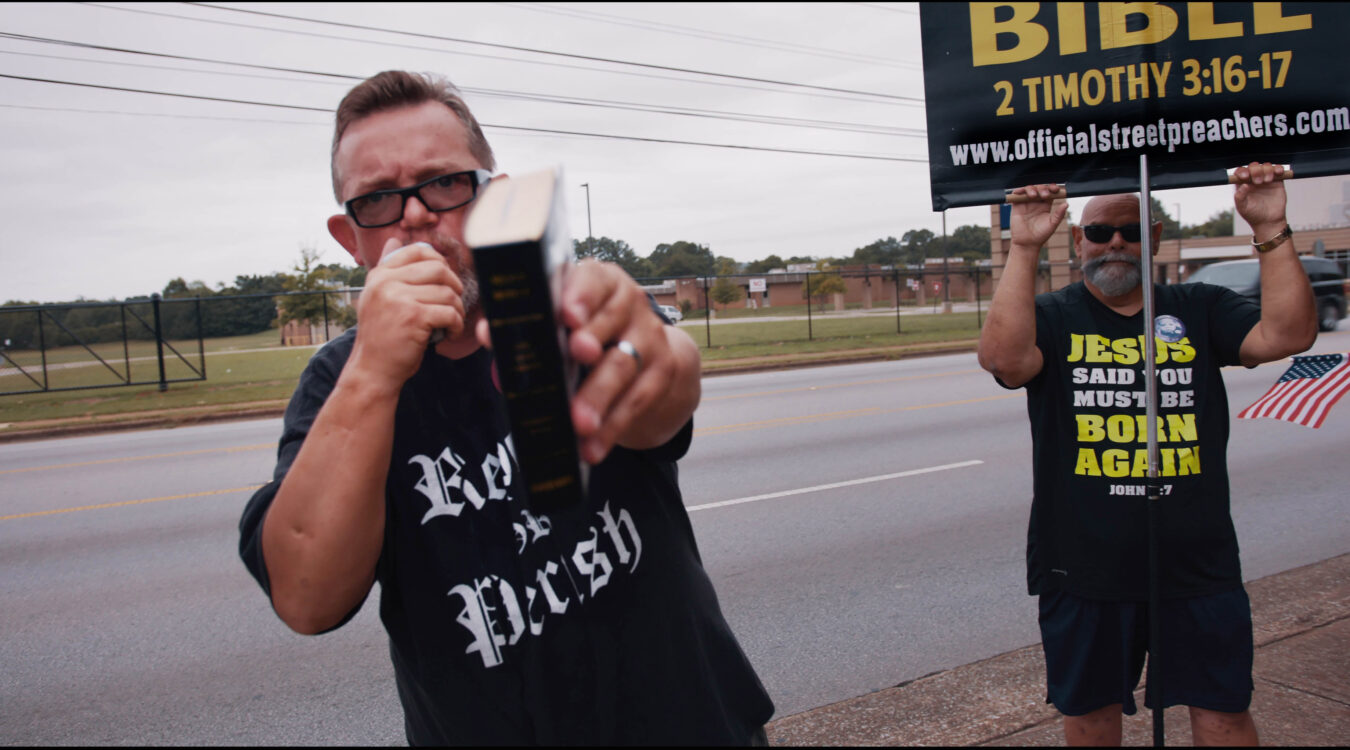 Three women sit in the waiting room of an abortion clinic in Alabama, about to undergo the procedure.

Morgan looks barely out of her teens and admits she is financially and emotionally incapable of bringing up a child. Sarana was a happy mother-to-be, now devastated by the medical prognosis of her unborn son – having been told he is unlikely to survive long beyond birth, she has reluctantly decided the kindest thing for him is termination. Then there is Alex, a woman in a same-sex relationship, pregnant after being attacked and raped outside her apartment by strangers.

For the protestors outside the clinic waving their banners and shouting at both the patients and staff of the clinic, these women are all the same regardless of circumstance – they are murderers of innocent souls and destined for damnation.

Emmy Award-winning documentary maker Deeyah Khan spent 15 months talking to people on both sides of what was already one of America’s rawest battlegrounds, even before Donald Trump’s latest Supreme Court confirmation Amy Coney Barrett now means the right to choose exercised by the nation’s women since the Roe vs. Wade decision in 1973 has never looked more precarious.

‘I’ve always been fascinated about why it’s such a highly toxic, intensely political issue in America in a way it just isn’t anywhere else,’ Khan tells me. ‘America has gone to war in the name of women’s rights, trying to rescue Afghan women or whatever. To see up close and personal that women in the land of the free are not as free as you, or even they, might think, I’ve been curious about why that is, what’s really going on.’

The result is ‘America’s War on Abortion’, Khan’s admirably balanced film scrutinising the intentions of both the doctors choosing to put themselves in danger to provide abortions for women and the protestors spending hours every week, sometimes for years, striving to prevent them, as well as intimidating their patients.

While Khan has always been fervently pro-choice, the process of filming has brought her more understanding of those with opposite beliefs, even those willing to condone violence against those protecting women’s right to choose.

‘I can see it more than I used to,’ she says now. ‘If you think that the foetus or the embryo is a human being, then its destruction is unjust. Many of the protestors compare it to the Holocaust and perceive themselves to be on the side of those about to be slaughtered.

‘In their minds, they are the good guys. They end up contributing to patriarchy, oppression, subjugation of women and other groups, but that isn’t their intent. I believe their intention is sincere.’

In their eyes, who is more innocent and pure than a child? You can’t put yourself in a better position than becoming the defender of the most innocent beings on earth

If pro-choice seems a natural choice for any young woman now, where has this passion to defend such an opposing position come from? Khan saw some patterns in the course of her interviews.

‘I noticed that many of these people had troubled, difficult life experiences, and some of this has become a way for them to rescue themselves, by trying to rescue others.

‘In their eyes, who is more innocent and pure than a child? You can’t put yourself in a better position than becoming the defender of the most innocent beings on earth. It casts you in this glorious space.’

All this protesting, tireless resistance on both sides – does anybody ever change their mind? Khan shakes her head. ‘The protestors claim they’ve persuaded some women to change their minds, but I never found anyone and the clinic staff didn’t wish to engage with the protestors. I found people’s views to be absolute. I always think there is room to shift opinions, but there has to be a desire for it and I didn’t find that.’

This battle has become almost surreally personal for Khan in recent weeks. Already a mother of one, she was in the midst of editing her film back in the UK when she suffered a miscarriage. As well as asking herself, ‘Why do I have to go through what these women feel?’ she explains why her experience only cemented her belief in the right for all women to be able to choose.

‘I was so relieved that I am where I am, that I was able to go to a local hospital and be looked after, ‘ she remembers. ‘If I was in Alabama, I would be shouted at, called a whore, called a Satanic baby killer, all by people who have no idea of my circumstances. Nobody knows.

‘I’m so grateful and it cements my belief in every woman’s right to choose. She’s the person who has to go through this, and every other aspect of her life. People have to live their own lives and make decisions based on what they can bear. Only each individual knows that. Why should anyone else have the right to say “I know what’s best for you”?’

Khan’s contempt is shared between Donald Trump, with his blatantly self-interested pro-life assertions, and the evangelical right who have anointed him their totem. ‘In the past, he’s clearly been pro-choice. The fact that these righteous, holy protestors are okay with his overall behaviour as long as he’s on board with them, I find disgusting. The hypocrisy of that is unbearable.’

And now staunch pro-life advocate Amy Coney Barrett has been fast-tracked onto the Supreme Court bench.

‘This is the worst thing that could have happened. A lot of the states are already prepared, with complete bans on abortion, even if it’s after rape. There is a case from Mississippi that will be kicked up to the Supreme Court, and once that happens, Roe vs Wade is on the chopping block. With Coney Barrett there, American women are in trouble. It’s all happening very fast. And banning abortions won’t stop them, it will just make them unsafe.’

If this all seems very depressing for the women of America, Khan also finds room for hope.

‘The young people link arms with everyone else, they don’t care, so that’s where the hope is. They have it right, but a lot of destruction can happen by the older guard in the meantime, who can pillage and ruin a lot of it.

‘Hope is in the people who refuse to give up. However dark it gets, they hold onto hope, and that is an act of resistance in itself.’

‘America’s War on Abortion’ airs on ITV on 29th October, and then available on ITVHub.