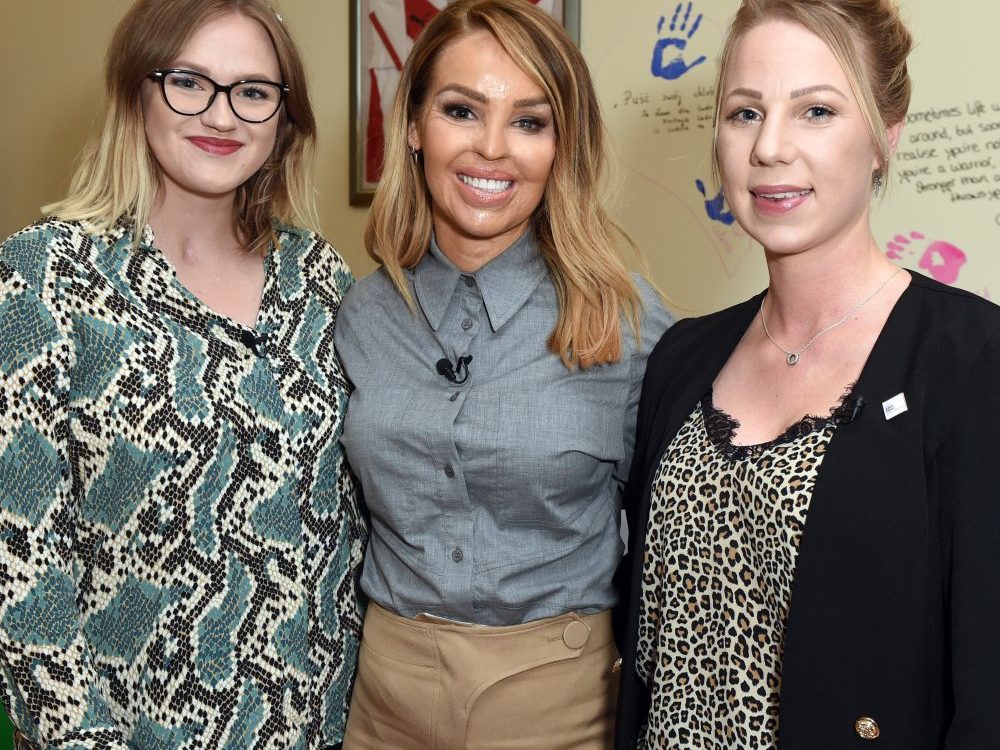 Piper talks to Restless about the launch of her rehabilitation center

Katie Piper is not a lady who gives up, ever, without a fight. But I had no idea just how impressive she was until I met her this week, and realised how many important life lessons she has to share.

I should have guessed, really. In the decade since she was badly burned and blinded in one eye in a horrific acid attack in 2008, she has written books, filmed documentaries, started her own foundation to help other people suffering similar injuries, even learned to foxtrot for her stint on Strictly Come Dancing.

But this week is special, with Katie publicly launching her latest endeavour, the Katie Piper Rehabilitation Centre, the first of its kind in the UK, a clinic dedicated to the residential care of burn survivors so they can continue their physical and mental recovery following their discharge from the NHS. As she told us, “We want to get to the point where survivors don’t need us any more, and when that happens, we know we’ve done our job.”

It is the result of years of tireless work on the part of Katie and her team, and her pride is evident as she talks about the bespoke therapy, both physical and mental, created for the patients – hours of intense physio every morning, followed by activities like skiing, swimming, yoga in the afternoon, schedules built around patients’ needs and the importance of rebuilding their confidence, as they prepare to return to the outside world.

She tells me, “People walk in feeling full of self-doubt and suicidal thoughts, and they leave those rooms believing in themselves, achieving huge turnarounds both physically and mentally.”

The first quality I spot is her generosity. The inspiration for the centre came from Katie’s own residential rehab treatment, which she had to seek out in France, and was determined to bring back to the UK if she could. She says, “If you knew a cure to some kind of disease, you wouldn’t just keep it for your family and tell nobody else.”

Then it is her awareness of the challenges surrounding her very personal work. Despite her own improved health after 300+ operations and inherent glamour, she knows burns remain far down the pecking order when it comes to stirring the cockles of our nation’s hearts. She says, “It’s hard to raise money for something people in society are conditioned to turn away from – animals, sick children, lots of people donate to those types of causes, but people don’t want to discuss this one.”

How does she cope with other people’s awkwardness? She shrugs. “We are all ruled by fear, and awkwardness and saying the right thing. And then there’s the boundary of not saying too much, but acknowledging it’s there. It’s all about having open conversations and education.”

Those sometimes painfully real conversations extend to other burn patients she meets, and even those attending her own clinic. “We have to be honest, people probably don’t want to come here sometimes. They are really depressed, they just want to pretend it’s not happening and forget, and then by the time they are ready to deal with it, they’ve missed the window because the scars are only malleable for up to two years, so it is time-sensitive. “But sometimes the best things you’re going to do for yourself are the hardest, and that’s rehab. You can look at any rehab – drug,
alcohol – it’s the same, it’s not going to be fluffy and fun with a nice Take a Break ending.

“Life isn’t like that, you’ll relapse, you’ll find it difficult and you’ll get frustrated, but anything worth having in your life is worth spending blood, sweat and tears over. My rehab wasn’t easy, I went abroad and it was so lonely, I only had a D in GCSE French!”

She laughs now. “It got better, I learned all the swear words.” But the biggest lessons come when she starts to talk about her own inspiration, where she gets her strength to walk what has clearly not been an easy path:

“I think it’s British culture to not give up, to be more stern about things, to have a stiff upper lip, and I’m brought up that way too.

“We always had to work and earn money for ourselves. We didn’t get pocket money. We had to wash my dad’s car. So I’ve always gone out there and realised, everything I want won’t come to me, I have to make it happen.

“Also when you live in London, it’s like that, isn’t it? You can’t even get a parking space. So I’ve always had that approach to life in general, but I don’t know… hindsight… you can’t say. It’s just what happened.

“All I know is I have a passion about something, and when people say no, it’s not possible, you can’t do that, I always think, no you can’t help me facilitate that, but it doesn’t mean it can’t happen. Or it might mean not right now, it doesn’t mean it’s no forever.

“Maybe I couldn’t have set up a rehab centre eight years ago, but I have now.”

Which leads us to the next gift she wants to pass on.

“I definitely think patience has been a big thing, I’ve always been impatient, and if you talk to people who’ve been through surgery, everyone is called a patient because every disease, you have to be, so I’ve had no choice but to develop that.

“I can still be empathetic. I can meet someone with a tiny burn and if it’s really rocked their world relative to them, you can’t say, ‘Mine’s worse than yours.’ People might want to commit suicide over invisible scars and it’s just as important that we address that. It’s not less of a thing that they’re living with, because if it’s all-consuming, it’s all-consuming. Who are we to say one is more worthy?”

I’m already overwhelmed with Katie’s compassion as much as her grit and intelligence. Then before we part, she tells me finally: “I suppose my biggest message to anyone, not just burns survivors, is, don’t underestimate the human spirit. Dreadful things happen in society and in the world, but don’t underestimate how unbreakable we are, there is that spirit within us that is
untouchable.

“Sometimes things get blemished and we feel like they define us, and they really don’t. It takes a lot of work, but when you realise you’re in the driving seat of everything, and you’re actually protected under there, that gives you clarity and confidence.”