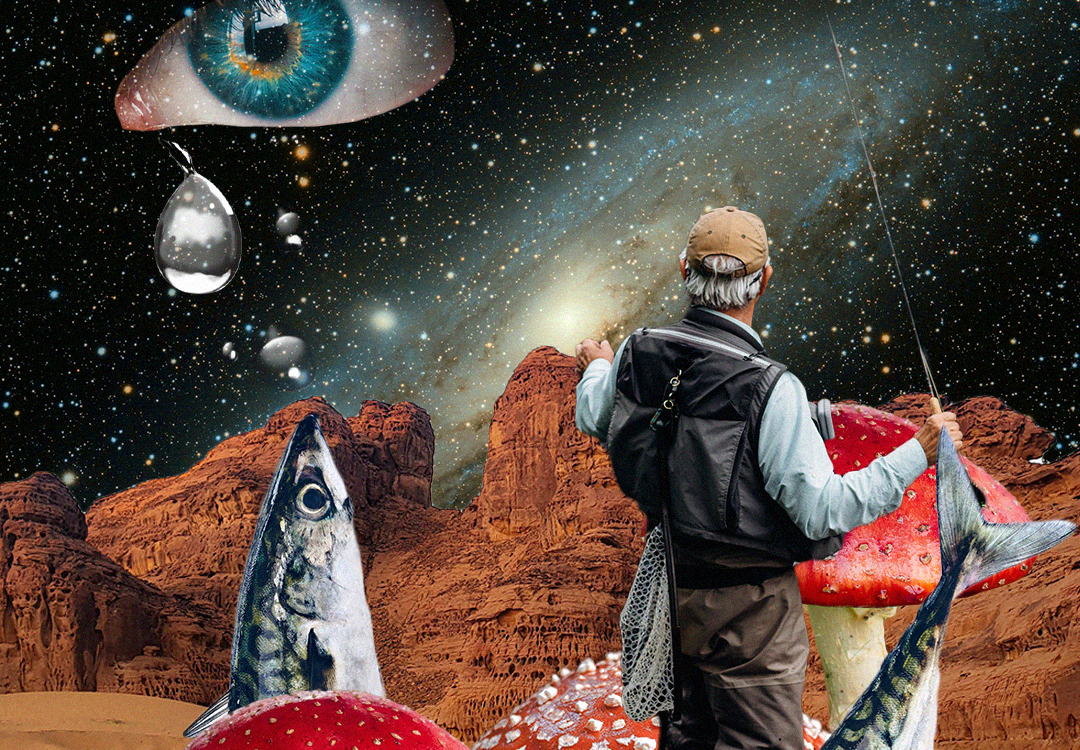 Should We Actually Encourage Fish Pictures on Dating Apps?

Bear with me, everyone. This is a headline I never thought I’d write.

As a dating app user for the past two years, I have come across hundreds of photos of men posing with fish of all kinds: trout, catfish, swordfish, hammerhead fish, bollocks fish, fish-that-don’t-look-like-fish fish. It’s a lot to comprehend, and I, like you, scoff and immediately swipe left at the first sight of a dead thing with scales in the hands of a potential lover. But instead of rolling our eyes at these images, should we actually be encouraging more of them? Don’t leave! Stay here with me. Bite the bait. Allow me to reel you in.

If you have ever scrolled through a dating app, you have seen the infamous fish picture on a man’s profile: man is on boat, man is wearing backwards baseball cap and shirt the color of sherbet, man is grinning from ear to ear, man is holding fish, fish is dead.

The man caught the fish with a fishing rod—or maybe his teeth for all I know—while out with his buddies for an afternoon on the lake or river or wherever fish come from. They’re drunk on light beer and sunburned. Their khaki shorts have fish guts and potato chip residue on them. And they’re having the time of their life, so much so that they chose to capture the moment on film (iPhone camera) and celebrate the success of their friend together.

This is what we should be encouraging. Not the heightened risk for skin cancer and certainly not the ruined shorts from fry oil, but the togetherness of it all.

The theory behind the fish pictures that are infiltrating dating profiles everywhere is centered around the level of support that occurred before the photo was taken. Fishing isn’t easy. It can be boring, yes, but once a fish bites and you have to reel it in, it can be quite the task. There’s a sense of pride in reeling in a fish. There’s a sense of accomplishment. And, no matter who reels one in, everyone else around you celebrates with you. This shared experience results in the toxic male veil being torn down for a moment, as a guy and his pals pose for a photo, embracing not only one another, but vulnerability, too.

When it comes to fish pictures on dating apps, there’s more than meets the eye. The subject matter is less that of a dead fish, and more of a man who felt comfortable, supported, and confident enough to ask his buddy to snap his photo, which seems to be another phenomenon in and of itself—men feeling as though they can’t ask this of their peers without coming across as ‘unmanly’.

This shared experience results in the toxic male veil being torn down for a moment, as a guy and his pals pose for a photo, embracing not only one another, but vulnerability, too

The narrative that’s swimming around in the dating app pool says this: men who have fish pictures on their profiles are ‘alpha males’ who eat, sleep, and breathe misogyny. They’re the guys who wouldn’t let their daughters play basketball, only ballet. The men who expect their wives to prepare dinner every night. The guy who insists on calling all women, regardless of age, ‘young lady’. If this backstory that has been cultivated from a single image is true, of course women would recoil when they come across them. I did, and still do. Seeing dead fish also sparks a sensory response, at least within me. As a woman born and raised in southeast Louisiana, I know how fish smell. It isn’t cute, and it certainly doesn’t make me look at the person holding the smelly bag of scales and think: “Yes, I want to sit across a sexy bar from you and sip a Negroni.” It makes me want to direct him to a shower where he will bathe. By himself. Because I will not be joining.

But what if we flipped the narrative? What if, instead of viewing fish pictures as alpha male, misogynistic, disgusting dealbreakers, we started to view them as the answer to priming, baiting, and hooking a more emotionally vulnerable and intelligent man? A man who can provide a fresh-caught meal for his family, but can also talk openly and freely about his emotions? A man who isn’t afraid to pose for a photo, even when he’s not on a fishing boat? A man who is confident and secure enough with himself to say that he’s feeling super fine and wants his picture taken?

“I can’t think of a situation where I would ask a buddy to take a picture of me when I was feeling attractive or happy,” said John. “I’ve never thought to do it and the thought of doing it makes me feel strange, like it would be an odd request.”

It seems as though this is commonplace in heterosexual males. But why?

“The only times I can remember asking a guy friend to snap a picture of me is when I felt I was dressed very nice for a wedding or formal event,” said Jake. “I’ve worn a tux only a few times and don’t wear suits often, though I really like how I look in a suit. If I’m out on the town and happen to think I look sexy, I wouldn’t ask a friend to snap a picture. Perhaps it’s a thought that’s crossed my mind, but it wouldn’t surprise me if a psychologist examined my behavior and said that my friends and I are influenced by heterosexual ideals of masculinity.”

Oh, that’s why this thinking is commonplace in males. Toxic masculinity. Are men falling hook, line, and sinker to their own game?

“To address toxic masculinity, men are responsible for changing this destructive approach to life and relationships,” Licensed Family and Marriage Therapist Dr. George James says. “It can be hard to go against all the scripts and narrative about what it means to be a strong man—that women will be attracted to—and embrace that a strong man includes the ability to be vulnerable, mature, and fun.”

If men are responsible for dismantling this toxic foundation in which life and relationships are built, this idea that vulnerability is weakness; self-love and celebration shouldn’t be experienced outside of reeling in an impressive catch; and emotions should be buried way beneath the surface, how can we encourage them to actually do the work to rid society of these structures which benefit no one?

“I think most men are hesitant to embrace vulnerability,” Dr. James says. “From an early age, they are taught not to be vulnerable and to stop and suck it up. Another reason is they aren’t rewarded for their vulnerability. They aren’t told by family, friends, and partners that vulnerability will increase their chances of meeting someone.”

Men, if you’re reading this and looking for a sign that women want emotionally available and vulnerable partners, this is it. Let down your walls. Show us that you have feelings. Let people take your photo.

“Men take pictures when they are feeling attractive and proud (i.e. the fish picture), but the challenge is that they feel they can only show certain moments, moments when they’re the victor or a picture of strength (i.e. shirtless photos),” says Dr. James.

It’s not the act of photo-taking, but the inaccurate messaging behind the action that we need to reframe and destigmatize. But how?

In short, in order to catch and reel in a vulnerable, emotionally intelligent man, the entire school of fish (men) needs to practice vulnerability together beneath the surface. What say you, boys? Are you up for the challenge? Please say yes, because teaching you and encouraging you to be vulnerable is not a woman’s job. And it never was.

But there’s our answer: men will only exert themselves as far as they can go whilst keeping their ego intact, and we, as a society and as single women looking for partnership, can only go so far as men are willing to embrace (and practice) vulnerability.

We can change that, though. We have the power to change society.

So, why not push the barrier? Why not encourage and normalize collective experiences where a man’s walls come down in the safety of their fellow cavemen doing the same thing? If men can take pictures on boats or in stadiums for their dating profiles, men can take pictures in other places, too. Might I suggest asking your friend to snap a picture of you looking dapper drinking your old-fashioned on dude’s night out? Grilling burgers on a Saturday afternoon, because SaTuRdAyS aRe FoR tHe BoYs? Kneeling next to your homegrown zucchini? Dudes garden, too. And it’s hot.

You know what else is hot? Women dismantling and crushing the patriarchy alongside their partners who have finally realized that these antiquated beliefs suppress them, too.

Give a man a fish, and he’ll eat for a day. Teach a man to fish, and he’ll keep catching them, take photos of them, and post them on his Instagram with a heartfelt caption. Why? Because he feels emotionally safe doing so.