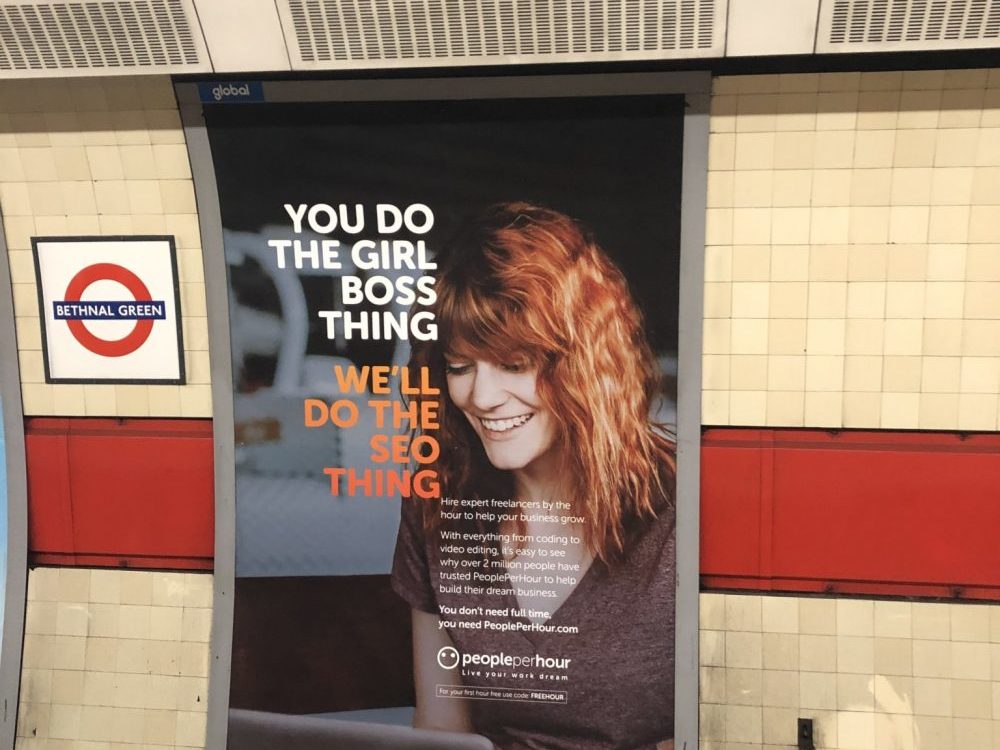 We’ll Do Our CEO Thing, Thanks

Three cheers for the ASA ban on another sexist ad. But can we finally ditch the term ‘girl boss’ too, please?

I’m going to start this with a disclaimer – I may be about to get ranty. I have a facial mister to hand, I’m playing my meditation tapes, but I’ll be honest, we’re venturing deep into my own personal rage territory here, so journey on at your own peril, dear reader.

OK, now I’ve got that out of the way, let’s take a moment, please, to celebrate the Advertising Standards Agency (ASA), which this week upheld 19 complaints against a Tube ad by gig economy purveyors PeoplePerHour. The ad in question, which was designed to highlight the firm’s work connecting businesses with freelance professionals, featured a picture of a woman at a computer, alongside the phrase ‘You do the girl boss thing. We’ll do the SEO thing.’

This week, the ASA upheld the complaints against the ad under guidelines introduced in June 2019 which ban “harmful gender stereotypes” in advertising. In its ruling, the watchdog stated: “We considered that using the gendered term “girl boss”, as opposed to just “boss”, implied that the gender of the person depicted was relevant to their performance in a managerial or entrepreneurial role. It was also likely to be interpreted as indicating that a female “boss” was an exception to the norm. Furthermore, in the context of “the girl boss thing”, use of the word “girl” to refer to an adult woman reinforced the impression that a female “boss” was a novelty, playing at their role and somehow less serious than a man in the same position.”

To its credit, PeoplePerHour responded immediately by prominently displaying its own apology for the blunder on its homepage, writing: “We know that women can be both SEO experts and business owners… This advert was produced by an external agency and in hindsight, we can see that the messaging is misguided and pairing the term Girl Boss with the word ‘thing’ comes across as reductive.” All of which is correct. Indeed, while the overall feel of the ad is that the woman pictured is punching above her professional weight, we need to give some credit to the word ‘thing’ which, in just five little letters, manages to say so much, and in such a snide tone, that it’s actually quite impressive.

That said, it’s the term girl boss that really grinds my gears, and I find myself asking, why have we, as women, allowed that term to become part of our popular parlance when it is so incredibly offensive?

In its defence of the ad, PeoplePerHour pointed towards the work of Nasty Gal founder Sophia Amorusu, who is widely credited with the original popularisation of the term, claiming that her promotion of it had made those behind the ad view it as empowering. And I can genuinely see where they could have gotten that impression. A quick search of #GirlBoss on any social media platform will throw up thousands of examples of women who obviously feel differently to me when it comes to the term. They’re entitled to call themselves what they want. But I am entitled to disagree with them. And I do. Strongly.

I’m not a girl

First off, the woman in the ad is just that – a woman. If we were to flip the example and start calling male CEOs ‘boss boys’ I shouldn’t imagine they’d stand it for a moment, and rightly so. For while it might seem harmless or playful, our self-demeaning adoption of this childish terminology infantilises us all, playing into an already overpowering cultural environment in which female youth and beauty is prized over experience and longevity.

Like so many other terms relating to women in the fields of entrepreneurship and self-employment – I give you ‘mumpreneur’ as my most teeth-itchingly irritating example – perpetuates the idea that a woman going it alone is either a ball-breaking anomaly or a bored stay-at-home mum flogging weight-loss milkshakes at the school gates to stave off boredom. And that couldn’t be further from the truth. As our economy becomes ever more populated by gig-economy hyphenates, it is women more than men that are increasingly turning to freelancing, up 55 per cent since 2008 compared with 36 per cent of men. Indeed, had the ‘girl boss’ in the ad actually turned to PeoplePerHour for help with her pesky SEO problem, ironically, she’d have had her pick of female SEO experts to advise her. But by inserting gender into the narrative, the unspoken assumption of the ad is that her assistance would come from a knightly tech-whizz in shining New Balance. And we all know knights, and tech whizzes, are male.

Indeed, so ingrained is this idea that on Wednesday, the ASA also upheld eight complaints about a television advert for computer firm PC Specialist which featured three men – and zero women – performing tech-related tasks. And at a time when we’re already seeing rising concern that we are programming our world with gender-biased artificial intelligence, this is a particularly harmful norm to perpetuate.

So, I ask you to join me in a game of sexist-terminology Room 101, where we banish ‘girl bosses’, ‘mumpreneurs’, ‘girls-who-code’ and all the other gendered jargon perpetuating, rather than dismantling, the imbalances that still exist across our professional networks.

There’s no use pretending we live in a world where women are equally represented in the board room. We don’t. And that means that it is 100 per cent acceptable, nay, ESSENTIAL, to applaud, raise up and celebrate those women who are still breaking glass ceilings, gender barriers and balls with utter disregard for historic stereotype. But the next time we do, can we celebrate them simply for being the #boss please?