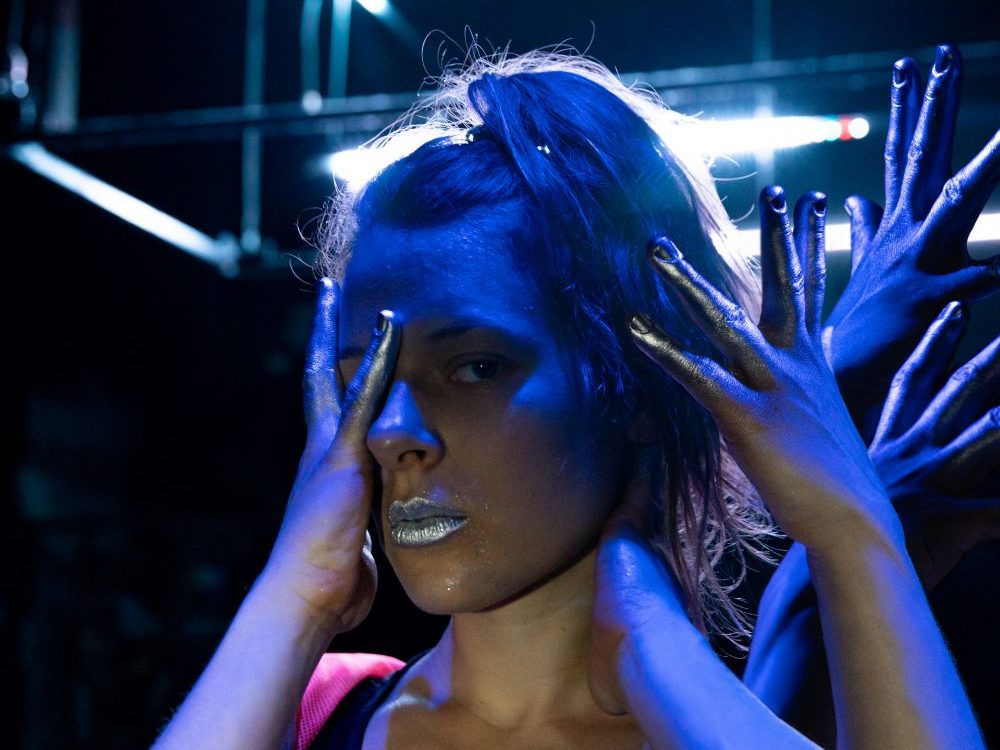 A Feminist Nightlife Guide to Berlin

Pick a night, any night, to emerge from the u-bahn on Warschauer Straße, and you’ll find it buzzing with techno beats, multi-lingual chatter, clanging bicycle bells and electronic tram whirls. To the west, orange bricks are piled high into the 19th century towers of Oberbaum Brücke, leading across the river to the punk scene of Kreuzberg; to the east, you can still find traces of squatted artist spaces where posh hipsters and mainstream clubs have taken over in Friedrichshain. Between small bars, loud streets, cheap beer and ubiquitous techno, this is the party that brings travelers to Berlin.

Inside the well-worn party cliches, I wanted to find experimental art, political commentary, and subversive messages. So I talked to three of my favorite Berlin artists about their corners of the performance art and music scene where feminist artists perform and thrive.

“Berlin is still relatively affordable and there’s a lot of time and space to devote to artistic pursuits, and small venues and audiences willing to take a chance on weird, unknown stuff,” explains Darling Fitch, a non-binary American performance artist and poet who has lived in Berlin for more than a decade, performing political poetry that changes with their body and audience.

“Because of its history, it’s also tended to attract the fringes, which makes experimentation not only possible, but welcomed,” they conclude.

The city provides the space for the alternative thought, both socially and personally, that creates new forms of art and culture. That’s how classical violinist and singer Lucia Vox ended up writing genre-defying songs mixing funk and electro sounds with pianos, keyboards, repeaters and robots. Born and raised in Berlin, Vox agrees that the city provides a certain freedom as well as support, especially as a female artist working in the male-dominated world of producing music. “I have a network of musicians and performance artists around me who support each other, which is a crucial ingredient in making independent art and music,” she says.

An artist straddling a different line, between burlesque, drag and clowning, Lilly Mortis crafts strange ideas into thoughtful, often grotesque performance art. She says Berlin “welcomes you for being who you are and for what you have to give,” no matter how weird it is.

Just under the Surface

“I recommend stumbling into the musty basements or random project spaces you see everywhere with strange performance happenings going on,” says Fitch.

You don’t have to look far past the Warschauer Straße station to find those kinds of spaces. In the past decade, the old trainyard next to the station has transformed into a colorful space for alternative culture, RAW Gelände. Pulling back red velvet curtains there on Saturday night, I enter Crack Bellmer, a miniature space with an old-time wooden bar and an imminent performance by Lilly Mortis and her burlesque-cabaret trio, the Velvet Creepers. Their show tonight, Cracks in the Mirror, features the performers breaking through a set of feminine expectations, one by covering her body with clumps of wet clay and another by literally dancing on glass. Lilly’s burlesque bride gives birth to a broken baby doll in a circus-horror ritual.

As in Lilly’s show, feminist burlesque and political drag bleed into each other at a number of events, like the seasonal Queens Against Borders at legendary Kreuzberg punk rock club SO36. Immigrant queens from Syria, the UK, Jordan, Australia and places even further afield perform as a benefit for transgender refugees in Berlin.

Lilly recommends seeking out event series’ like this, rather than venues, to get in touch with Berlin’s feminist nightlife. Rattling off some of her favorites: “The Big Broad Reveue always has a lot of strong women, lots of body positivity, with a great vibe; Berlin Burlesque Week is the most political and feminist burlesque festival I have ever experienced; Drag Brunch at the Tispy Bear fucks with gender identity among other things.”

One summer afternoon, aboard a floating raft in Berlin’s Spree River, Lucie and the Robot perform her song “Whistles and Calls,” about how Vox deals with catcalls in the street. Behind her, “the robot,” a flesh-and-blood duo of dudes, echo the annoyance of “whistles and calls” by chanting it as a refrain while she gets the best of the catcallers with her lyrics. Other boaters along the Spree pull up beside the raft to tune in and dance along.

Lucie and the Robot’s atmospheric, danceable set provides a welcome change in perspective from the mostly pre-recorded beats so common behind DJ booths in Berlin. Vox says, you just have to know where to look.

“For me Berlin is a good place, because it offers a good mix of electronic and more band focused music scenes,” Vox says. “I like to oscillate between the two, both as an artist and as a music consumer. As a consumer I get inspired for my art as well, so it’s nice to have the chance to enjoy totally different genres and scenes all in one place.”

Zuckerzauber’s summer-beach-behind-the-sidewalk is where you’ll find her discovering new bands, while for an electronic fix, she dances at factory-turned-artist-workspace Mensch Meier, where she has performed with another experimental electronic duo, Lucia Fields.

Fitch adds that “non-binary electronica act Strip Down and Brazilian transgender musician Sanni Est are both great if you’re looking for something danceable.”

Until the End of the World

In Fitch’s current one-person show, Revelations, they take the stage in fishnets and gothic drag makeup, using juicy props and an electronic backing track as they perform insightful poetry about a personal reckoning with climate change and nature. The show, which they describe as a “hopeful harsh noise poetry pop opera about the end of the world and our place in it,” is thoughtful in an unexpectedly accessible way, a quality Fitch looks for in other smart, experimental artists they admire.

“There’s so many talented artists in Berlin and you can really get deep down into so many niches,” they say, recommending Vanessa Jupiter’s high-concept experimental performance art and performer Ignatz Höch’s music, self-described as “bitter sweet gender trouble, rich toned doompop and minimalist show tunes.”

What is still so great about Berlin remains the same as it ever was: no matter what you’re into, you’ll find your people.