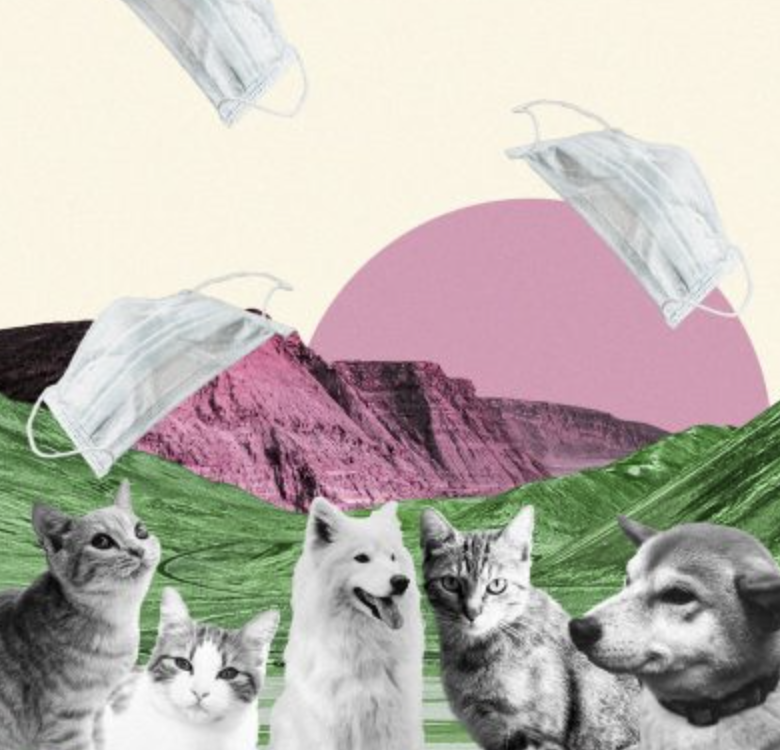 A Love Letter To Pets

How are our pets are helping us through the pandemic? Charlotte Moore explores

Around a year ago, my boyfriend and I decided to get a cat. Well, more aptly, after months of badgering, my partner relented and we adopted Otis.

Otis was a nine-year-old long-haired creature. We’d initially had our heart set on a kitten, but after a few weeks of scrolling through adoption sites, I came across Otis. More importantly, I saw the number of days he’d been waiting to find a family.

He was described as having a big ‘personality’ – a chatty young man (I mean what does that even mean?) and he’d had a pretty depressing life so far. Akin to the shiny suited estate agents that referred to damp, south London bedsits as charming, we learnt that ‘personality’ was code for ‘will bite literally anything that approaches him’.

I’m obviously completely biased. But, he is adorable. Tufty fur sticks up at skewed angles, a grumpy expression permanently set on his face. And, small white paws that resemble a cartoon magician. But, despite his endearing appearance, our first meeting resulted in swift, bloody justice after attempting to pet him.

A few plasters later, I knew we had to have him.

Two months on, I couldn’t remember a time when he wasn’t in our lives. His biting became less and less. He’d warn us with a hiss when he wanted to be alone, and the best part? He became my shadow. As someone who works from home, often alone, he was my new favourite colleague. He’d sit on my lap, head tucked under the desk that I worked at, his snores in time with the tapping of my keyboard.

As lockdown began, my world closing in, my cat, it seems, was the only thing keeping me sane. It’s well known that petting an animal has a calming effect for humans. And, during a time where social contact is limited, a pet can offer you a space to be tactile.

And, it seems that more and more of the UK has decided that a furry friend is essential right now. Battersea Dogs and Cats Home rehomed 86 dogs and 69 cats in one week in mid-March, more than double the animals placed during the same period last year. Another charity, Dogs Trust has reported a 25 per cent increase in adoptions and Google searches for pet adoption have almost doubled.

But, this isn’t as positive as it seems. Animal charities are concerned that after lockdown, a huge number of pets will be abandoned. That once we’re all back out of the house and in the office, we’ll feel differently about our furry pals. Rachel Casey, Director of Canine Behaviour at Dogs Trust told ITV:  “First of all it’s really important to think about will they actually fit into your lifestyle when things do go back to normal. Have you got enough time to take them for walks? If you do get a puppy at this time think about all the difficulties and all the differences about life now, and do your best to prepare for when things go back to normal.”

For Ruby, a PR manager, her pup Pina has provided her with structure. Having had a dog for several years, she’s well versed in the challenges and joys of dog ownership. “Having to walk her has been really good – she relies on me”. And this reliance is essential for so many of us.

Simply knowing that an animal needs us to continue their routines of feeding and walking, (even if we don’t want to get out of bed), is good for our mental health.

Charlotte, on the other hand, is new to pet parenting. “We’d wanted a dog for around four years’ and at the time we found him, we were still two weeks before lockdown. He’d just turned three months old, and had already been abandoned by his owners. He arrived with nothing – no bowl, no bed, no toys. It broke our heart. So the next day, we got all of that ordered and made him comfortable. But, he was so adorable and filled with personality.

I think the one thing I’ll say is, training a puppy is bloody hard. Especially when they probably haven’t had the best start in life. They need a lot of attention, a lot of training and are a big investment. But in all honesty, I wouldn’t change him for the world! He is just wonderful to have around for company and affection at a really uncertain time.”

There’s a growing amount of research in this area, with pets having a positive impact on anxiety and depression. Clinical Lead, Holly Beedon filled me in. “You can talk away to your pet and let it all out with zero judgement. They’ve also been found to be great motivators. Even if you are feeling low you still have to care for your pet. Powerful bonds can be formed between a human and their pet and they become part of their human’s daily routine.

Research has shown that the bond between a human and their pet can be just as powerful as a bond between two people. As well as this, stroking and hugging your pet can significantly reduce anxiety levels. This is because it changes your focus of attention and takes your mind away from your anxious thoughts. Caring for your pet can often give a sense of achievement and purpose in life.”

“Dogs, in particular, get bonus points for boosting our mental wellbeing. Dogs need to be walked, which in turn forces you to get outside. Exercise is great for your mental health! What’s more, other dog walkers often say “hello” so the social element comes into play too. This is great for tackling withdrawal and isolation.”

As I write this, my eyes flicker to the sofa that now needs vacuuming daily. I fondly remember the pre-cat lie-ins – it turns out that ‘chatty’ translated to ‘alarmingly loud wake-up call’ (beginning at 5 am, ending as and when he felt like it).

The sleeping cat on my lap – now, an immovable object and I consider the chaos that such a small ball of fur can cause.

And, like most pet owners, I wouldn’t have it any other way.