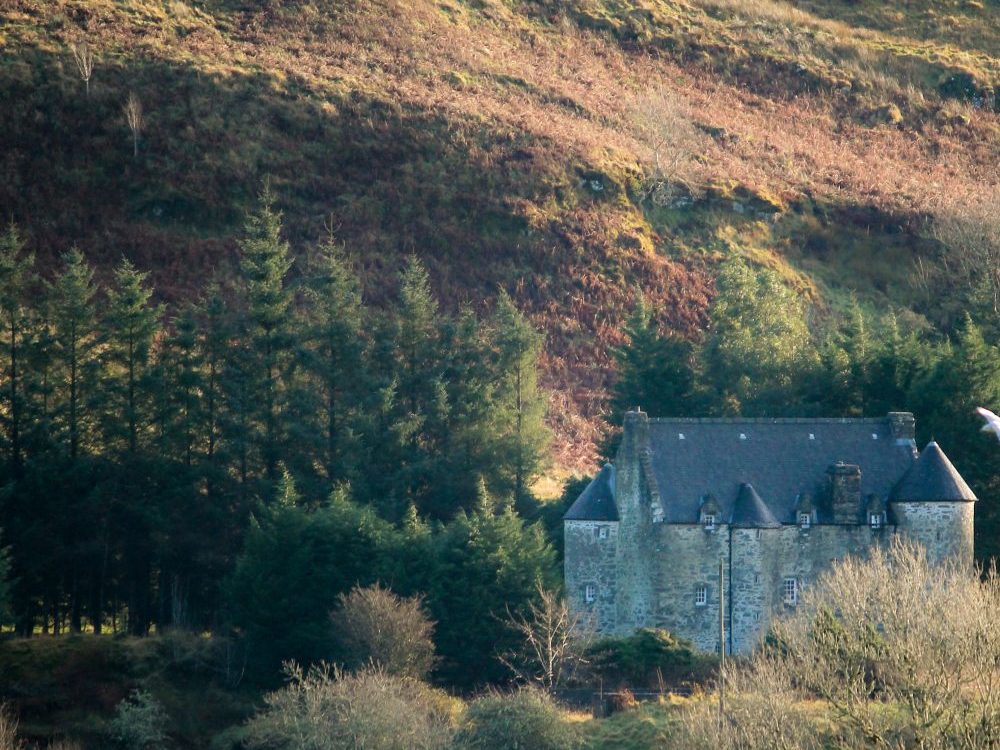 Cool and the Castle

Ever dreamed of running away to the country? Restless meets a couple who did just that, turning a remote Scottish Castle into a hip holiday hideaway

“That’s the definition of luxury for me, right there,” laughs Stef Burgon, as I stumble into her kitchen at 9am of a Sunday morning, barefoot and tousle-headed in my PJs. “If you feel like you can wander around in your pyjamas happily, we’re doing something right.”

It might not sound like much, but when you consider that Stef’s kitchen is a barrel-vaulted enclave at the heart of a Scottish Castle dating back almost 500 years, achieving the sort of happy-go-lucky, home-from-home vibe we’re experiencing is no mean feat.

Just five years ago the couple, both then in their 30s, had high-flying media careers in Dubai, Stef as a well-known radio presenter and Simon in advertising, with a side hustle making sandboards (think skateboards, but for dunes). Adventurers at heart, they spent much of their time travelling, musing about one day running the sort of boutique holiday property they both loved to track down. And then they visited Scotland.

From media to majesty

“We had taken a road trip around the country in 2014,” Simon explains. “It was January. It was cold, it was wet and it was windy, but we fell head over heels in love with the place regardless. Then, back in Dubai, we saw a newspaper article about how there was a castle for sale in Scotland for the same price as car parking in London and it seems crazy, but we just knew it was for us. We couldn’t resist.”

It took months of negotiating with mortgage providers, and the couple sold pretty much everything they owned in order to secure the property, but a year later, they became the keep’s fourth owners. They immediately visited to do remedial work, drying the place out and making it warm enough to stay in, before renting it out as an exclusive let on Airbnb with the help of a property manager. But they had bigger plans.

In 2018, they packed up their remaining belongings and set course for Scotland once again, via a road trip around Europe picking up antique finds along the way. They then began piecing together the boutique property of their dreams, tackling much of the demolition work themselves before enlisting their architects, in a bid to make what savings they could.

Such was the scale of the project, it attracted the attentions of a TV crew, and the couple were filmed around the clock by a team from Channel 4’s The Great Hotel Escape, trying valiantly to keep the smiles on their faces as they watched YouTube videos to learn how to preserve flagstone flooring and Googled the realities of turning a turret into a wet room.

“It all looks like fun on the show, but there were days we could have cheerfully killed each other!” Stef reveals, when I comment on how laidback they looked on the show. “Around my 40th birthday, the crew were there, and they filmed Simo giving me a tree for my birthday. I was smiling on camera but really, I was pretty livid. Is that it? A tree?

“I remember sneaking off for a sleep in the camper van we were living in afterwards, covered in dirt. I hadn’t showered for over a week. We didn’t even remove our clothes at night because it was so cold, and we had to wade through mud in the floorless kitchen with a torch to go to the only working loo, which was in the pantry. It was miserable, and I was pretty much wondering what the hell had possessed us to take it on.”

But if the process looked more amiable than the reality, the results of the couple’s hard graft are inarguably spectacular today. Now open as a luxury B&B, Kilmartin is Instagrammable in the extreme, with every tile, every tap and plug and every piece of art carefully and personally sourced to create an eclectic, achingly hip and extremely stylish finish. The five individually decorated guest rooms each have their own character, from the pheasant wallpaper, pink-tiled rain shower and vaulted ceiling of ‘Clarke’ to the teal and copper roll top bath and clean white recesses of ‘Carswell’, where we slept like babies, cocooned in the finest linens, disturbed only by the golf ball-sized hailstones that rendered outdoor escapades blissfully impossible during our visit.

Indeed, while we spent much of the weekend either languishing in our bath or bed, when we did make it downstairs, the atmosphere was very much one of a getaway with friends. Warm and engaging hosts, Stef and Simon go out of their way to make Kilmartin a sociable and fun place to hang out, gathering their guests together for a glass of wine and a blether around the kitchen island, organising informal pop-up dinners in the atmospheric dining room or inviting everyone to sit by the fire in the cosy grand hall, taking it in turns to select from their collection of vinyl.

The castle is situated in one of Scotland’s most historic areas, surrounded by standing stones, picturesque glens and beautiful lochside walks, and the couple ensure that their guests are well-equipped for exploring, when the weather allows, by creating a hearty two-course breakfast every morning, serving up everything from fruit salad with mint and honey dressing and kedgeree, packed with local fish and eggs, through to a full cooked breakfast and local cheeseboards, alongside homemade bread and juices.

But if the idea of catering to a dozen people at a time might seem daunting, for Stef, it’s a dream come true, and not as far removed from her old job as it first might seem.

“I love meeting people and finding out about their lives, and now, instead of doing that on the radio, I do it in my house. Perhaps it’s because it’s a bit of an out-of-the-ordinary place to come on holiday, but we really do get some very cool, interesting guests and that makes it all really fun.”

Surely though, having been used to being recognised in the supermarket, cooking breakfast for strangers who are sleeping in your home must be a bit discombobulating, I muse. The burning question is, at the end of all the slog, has it been worth it? “Well, my hands will never be the same,” she laughs. “But yeah. It’s even better than we hoped.”

Kilmartin Castle is situated in Argyll, Scotland, around a two-hour drive from Glasgow Airport. Ben and breakfast starts from £180 per room, per night, while the castle is also available as an exclusive let for larger groups and small-scale weddings. For more information, or to book, visit kilmartincastle.com