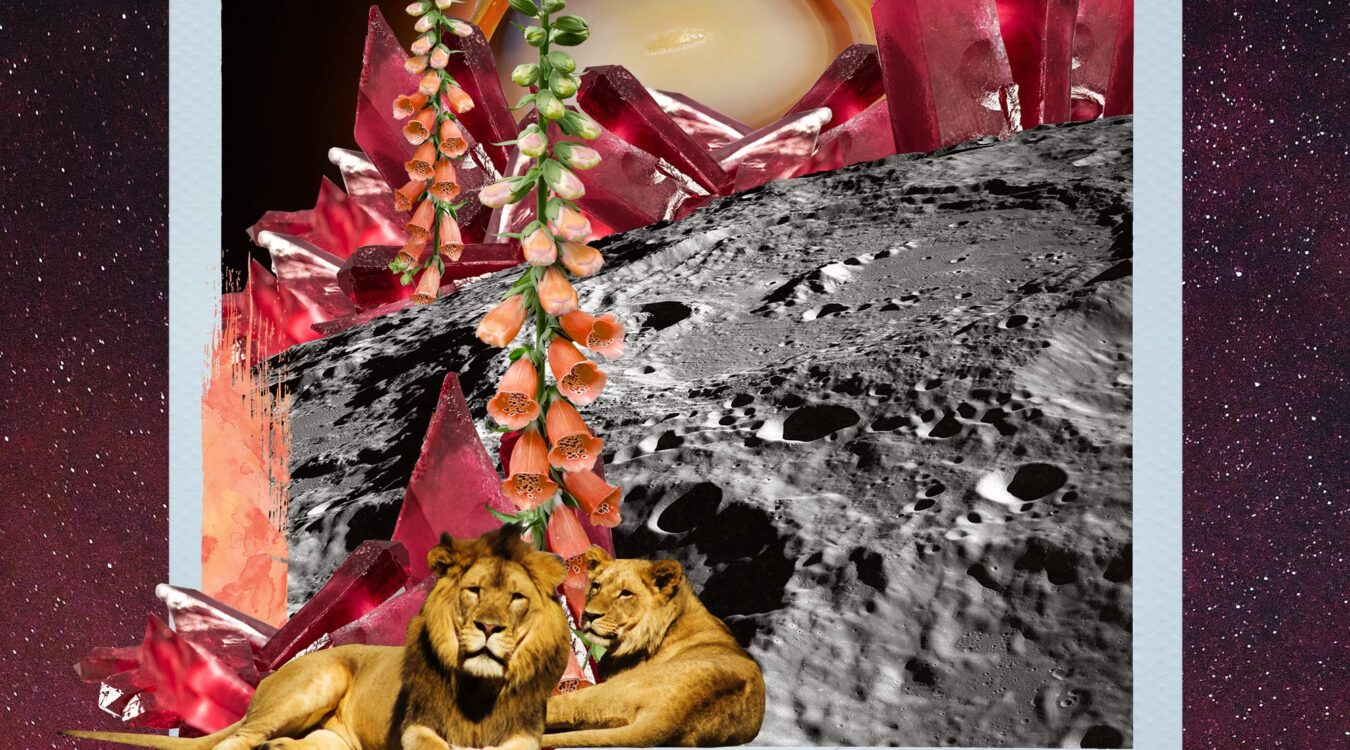 Our resident astrologist, Meredith Lovelock, explores what’s in the stars for July

It’s been an incredibly strange year, both astrologically and on the earthly plane, but, it feels like the tides are shifting.

The retrograde, ending, on the 12th, means we’re all likely to start feeling slightly more in control of our own day-to-day lives and our destinies. Meanwhile, full moon in Capricorn on the 5th is also a lunar eclipse, bringing with it optimism and good luck. On the other hand, the new moon on the 20th suggests that restrictions are likely to come into force for some of us, but patience and a calm attitude should be enough to see us through this tricky time.

July looks like it’s going to have its peaks and troughs, as have all recent months, but overall there will be a shift towards positive change, providing we put the work in as individuals.

It’s Cancer season baby and you are THRIVING. Happy birthday to you, I hope you’re having the best time as the stars align for you. Use that energy to make a fresh start and set some new long-term goals for yourself. Around the beginning of July, the interactions between the Sun and Uranus may lead to some exciting developments in your personal life. Should a tempting opportunity present itself to try something new, take it – this is your chance.

Around the middle of the month, a Jupiter-Pluto conjunction will leave you feeling ambitious and motivated. Make the changes you’ve been considering and don’t look back, but try not to be too ruthless or you may hurt those around you. At the end of the month Mars is boosting your energy levels, but try and work them out in a constructive way, rather than indulging in anger or aggression.

July is looking good for you, and happy birthday to any first decan Leos! The first half of the month will predominantly be influenced by Mars’ energy, which will have you feeling about as Leo as you can get! This planet will be bringing you passion and charisma by the bucket load, so this is a great time for you both at work and socially. Be direct in the workplace and it will be respected and listened to, so trust your instincts this month and go with your gut.

Later in the month, Venus enters your chart, bringing with it luck in love and money. Lavish your loved ones with attention, but wary of Jupiter’s interference in the last week of July, as you may find some old tensions within relationships rearing their heads. Keep calm and try and talk it out.

Hold on Virgos, the Mercury retrograde is almost over! Our favourite planet will soon be back in the skies and we’ll be breathing a sigh of relief. Early in July Uranus’ influence will make you more intuitive and creative than usual. Listening to your instincts may lead to some pleasant surprises and new opportunities, and this is a great time for socialising. In the second week of July, Venus will be interfering with your love life, but not in a good way.

You might struggle to show affection or feel more socially anxious, but having patience with yourself and focusing on communication will help you get through this difficult period. Around the end of the month, Neptune will be trying to trip you up, confusing you and causing disappointment, especially romantically. Be careful, and know your worth before committing to anything you’re unsure of.

While the first two weeks of July aren’t looking great for you, Libra, rest assured that it will get better in the second half of the month. There’s a likelihood of karma coming back to bite you in July, especially if you’ve upset a past lover. Around the middle of the month, Mars will enter your chart, bringing with it an urge to be a little selfish.

Be careful though, as those around you will push back. Things start to look up in the second half of July, the Sun will be boosting your energy, making you more creative and helping you reach your goals. Expect the fog of the last two weeks to lift and opportunities to start falling into your lap.

July is looking good for you Scorpio, with opportunities springing up wherever you look – you just need to be bold enough to take advantage of them. At the beginning of the month a Uranus-Sun interaction will make you more self-aware and intuitive, so take this chance to step outside of your comfort zone and try something new.

Around the middle of June, Pluto’s influence will drive you to want to make some changes in your life. Don’t shy away from this, as good luck is on your horizon. At the end of July, the Sun’s presence in your chart may mean that you’ll have to work a bit harder to achieve your new goals, and it may feel like you’re receiving more pressure than you deserve – stick it out if you can though, this will soon pass.

Venus and Mars are all over your chart, Sagittarius, suggesting that you’ve got romance on your mind. At the beginning of July, you might find that you’re feeling shy or anxious. Try not to get too down though, as change is on the way soon. As Mars moves into your chart around the middle of the month, your energy levels will be renewed by the red planet, and you’ll feel confident enough to get out there again.

You’ll be more charismatic than usual and are much more likely to succeed in matters of romance. Around the end of the month, a Venus-Neptune conjunction may lead to some confusion or deception, especially in your love life. If you’ve just started dating someone new, make sure you’re not putting them on a pedestal.

It might feel a bit like the world is against you this month, Capricorn, but life will start to improve around the end of July, so don’t stress too much. The Sun’s opposition to your sign is an indication of increased pressure at work, and you may start feeling overwhelmed. Take a step back and focus on why you’re doing this, and if it’s worth the stress. Around the middle of the month, Mercury and Mars are conspiring to stress you out even more, so try not to rush things. Release your frustration through exercise or sex, or you may find yourself quick to anger.

Around the end of the month, life will start to improve, as Uranus and Mercury bring a little humour back to your life. Have fun, relax, it’s all up from here.

July is looking good for you, Aquarius! Saturn’s influence in your chart suggests that something you’ve been working towards for a long time will soon come to fruition, so while you may need to keep up the hard work, you’ll soon be reaping the rewards. Around the middle of the month, Mars’ influence will be boosting your energy levels and giving you a little extra courage to face down any trouble at work. Try and be cooperative rather than aggressive though.

Around the end of July, you may start feeling more tense than usual; Uranus and the Sun are not at a favourable angle in your chart, and you’re going to need an open mind to get through this tricky period. Prepare yourself for abrupt changes, but try and see the positives wherever you can – there are more than you think.

Let’s slow down this month, Pisces, as life takes on a slightly more relaxed pace. Early in July, the Sun is smoothing the way for you, bring you a sense of peace and calm internally and within your relationships. It will feel like everything is going your way, so take advantage of it while you cane. Around the middle of the month, Venus’ influence might make showing affection more difficult for you, but this will soon pass. Just take your time and try to move past any shyness.

Later in the month, Mercury will be boosting your communication, meaning it will be a great time to negotiate at work, just make sure you think things through beforehand. At the end of the month, Uranus brings a little fun to your life, so sit back and enjoy time with friends and family.

Life is picking up the pace this month, Aries! Early in the month, Mars is boosting your energy levels, making you feel sexy but, potentially frustrated, so try and channel it in a healthy way. Around the middle of the month, Venus’ influence brings you increased opportunities with money and romance. Show your affection someone special it’s likely to be reciprocated. Jupiter’s influence will also be pushing you to make progress with a long-term project, so don’t delay any longer!

Around the end of the month, try and focus on the little details. You may end up making mistakes with big consequences otherwise, and try not to promise too much of yourself at this time – you’re probably going to be feeling a little worn out!

Get creative this month, Taurus. Embrace your artistic side and have fun with it, the Sun is boosting all things creativity and encouraging you to relax. You may find yourself drawn to a creative project you’ve been working on for a while, and this is the time to make some progress with it. Use that positive thinking this month and you’ll find you make a great impression on some important people.

Later in the month, Uranus is bringing a little more humour to your life, and you’ll be feeling even more sociable than usual. Relax and spend time with friends, and you may find that you’re getting along with different people to usual. Now is the time to spread your wings and expand your social circle.

You’re going to be feeling more creative and spiritual than usual this month, Gemini. The Sun is boosting your artistic energies early in the month, and Neptune climaxing later in the month will bring you a greater connection to all things spiritual. You’ll also be lucky in the workplace this month, and it’s likely that all of your hard work is about to finally start paying off.

At the end of the month Venus will be helping you to relax, so enjoy the ride and have a little fun. This is also one of the best times of 2020 for your dating life, so if you’re looking for someone new, this is the best time to find them.