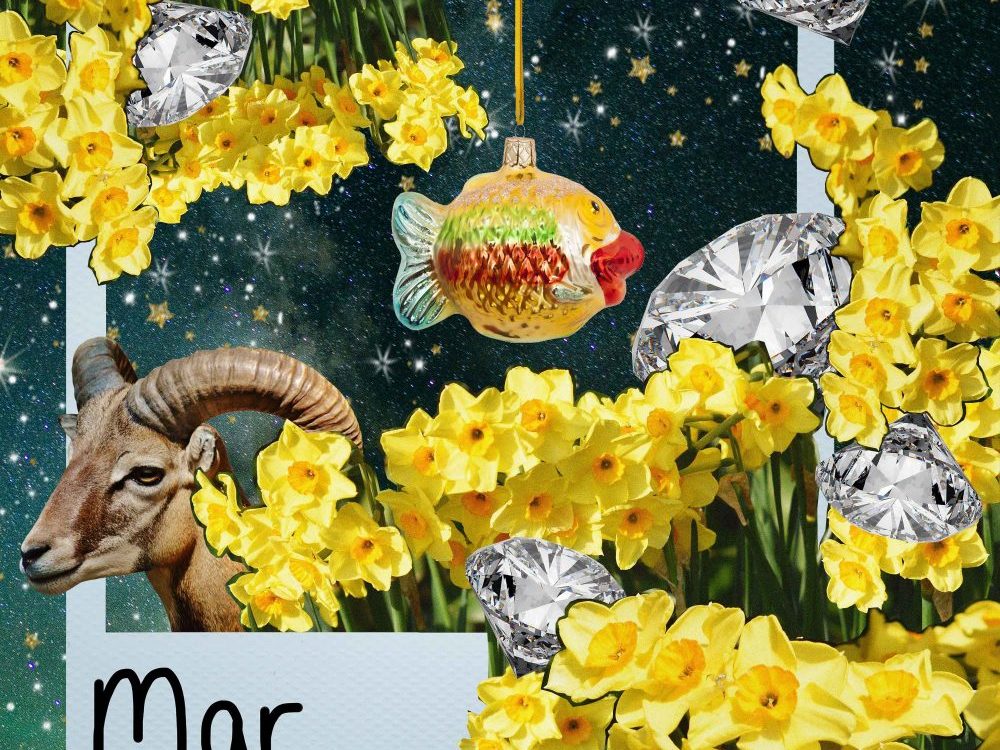 Just hold on everyone, that Mercury retrograde ends on the 10th and then we’ll all be able to breathe a little easier. Just before it ends though, we have the full moon on the 9th, which will be guiding how March unfolds for us all.

This month’s full moon will have a mostly positive influence thanks to Jupiter and should give us all a little extra luck and happiness.

The downside is a greater likelihood for confusion and deception, so watch out if any of these occur in your horoscope as they’re even more likely. The effects will last until the new moon on the 24th, when we begin a new monthly cycle, presenting us with an opportunity to shake off any full moon negativity and begin again.

If we can just make it until the 20th of March we’ll also FINALLY be in Spring. Despite my best efforts every year I have yet to manage to manifest Spring earlier than the vernal equinox, but I did nearly have a little cry when I spotted some crocuses and daffodils the other day.

For now, though, let’s have a little look at how March will be treating us:

Happy birthday Pisces! I hope you have something special planned for yourself because it is most definitely Pisces season and you deserve the best. You’re likely to find yourself juggling ambition and empathy this month, as the Sun-Neptune interaction early on will increase your intuition and sensitivity. This may leave you open to negative influences and deception, especially around the full moon on the 9th, so be careful who you trust and set boundaries as needed. Towards the end of the month, your mind will shift towards your goals, and a Jupiter and Pluto conjunction will help you focus. It will take some work over the next few weeks, but if there’s an idea or goal you’ve had in mind for a while this is the time to work for it.

March will be a month of high emotions for you, Aries, but you’re no stranger to passion. At the end of the month, we’ll be in Aries season and you’ll be in your element (Happy Birthday to any March Aries!), but at the beginning of the month, you’ll be feeling Mars’ influence most strongly. You’ll feel a drive to be assertive and may find you’re angrier than normal if you’re being held back. Release this tension in a healthy way, whether that’s through exercise or sex, as you might find your passionate ways cause tension if you don’t practice patience. Capitalise on that Aries energy at the end of the month and take a leap of faith – you’re moving in the right direction.

March is all about relationships for you, Taurus. Venus and Mercury are cooking up a storm, especially at the beginning of the month, and you’ll find that you feel more relaxed than you have in a while. You’ll be receiving even more attention than usual, whether that’s from your partner or a new flame, and this is one of the best times of the year for dating. That Mercury-Venus interaction will also reduce your stress levels this month (please can you make me an honorary Taurus for a bit, I need this), and you’ll find that barriers break down with ease. It’s a time of personal growth and optimism, so take advantage of it and have a little fun!

It’s always a month of two halves for you, Gemini. The first two weeks of March are likely to make you want to push others away and set boundaries, but people will be testing them so stand firm. The latter half of the month should leave you feeling like your old self again, with that inherent enthusiasm and lust for life rushing back all of a sudden. Use that energy as you wish, and you’ll find that you form relationships more easily and are able to easily achieve your goals. No matter how difficult the task, your self-confidence means you’ll feel able to power through. Go get ‘em.

Venus and Uranus are all over your chart this month! At the beginning of the month, a Mercury-Venus tag-team will help you to express your emotions and improve your relationships. You’ll feel more relaxed than you have in a while (February was rough wasn’t it?), and it’s likely that your cashflow will improve soon. In the middle of the month, Venus is back again to brighten your days and bring you a little luck in love and money, and you’ll find you’re even more charming than usual. The Sun’s influence towards the end of the month is usually positive, but you may find yourself more frustrated than pleased with the challenges it brings – don’t worry though, with a little patience you’ll sail through.

Take a deep breath, Leo, retrograde is almost over. That stress and anxiety you’ve been feeling for a while now will likely continue towards the beginning of the month, but once we reach the full moon you’ll start to feel more like yourself. Venus will increase your desire for affection this month, but make sure you don’t lower your standards to get it. You deserve the best babe, so make sure you get it. The Sun has got your back though, as in the second half of the month it will be bringing you a little peace and calm. You’ll find yourself more productive than normal, so this is a good time to try and capitalise on that energy and try and complete any goals that have been dragging on for a while.

This particular Virgo was very pleased to see that romance is on the cards for March, with Venus getting frisky with both Mercury and Uranus in the first two weeks of the month. That means reduced stress levels, happiness and ease in relationships, and it’s the perfect time to release our inhibitions and have fun. I’m certainly planning to! Around the middle of the month Mars and Neptune are also getting hot and heavy, so the romance is sticking around, but try not to neglect the rest of your life, as things will take a dip around the end of the month. Mercury is coming back with a vengeance and you’re likely to be pretty stressed out. Be calm and clear and you should be able to clear up any miscommunications.

Despite a little stress at the very beginning of the month, March should be pretty good for you, Libra! Venus and Uranus are bringing back the fun to your love and social life, and it’s worth putting in a little extra effort to develop them. Mars and Jupiter will be boosting your confidence in the second half of the month, meaning you’re more likely to be successful and may get a little lucky. Take advantage of it and enjoy yourself! Saturn will be influencing your sign from the 9th until mid-July, and this marks a new phase for you to begin steadily working towards your goals – determination, patience and clear sight of your goals will ensure you reach them soon.

This should be an exciting month for you, Scorpio! You’ll feel the need to shake things up at the beginning of the month – have fun with it, but there may be unexpected consequences. This can be a good time for casual dating, but don’t get too serious until the retrograde is over. A Sun-Pluto interaction around the middle of the month will leave you feeling powerful – use that badass energy to make the changes in your life you’ve wanted for a while, and focus on your goals.  Towards the end of March Venus will be boosting your social life, enjoy yourself, but watch those unhealthy relationships, as they might come back to bite you if you expect too much of them.

It’s going to be a month of hard graft I’m afraid, you’ve got this. Saturn is the big hitter for you this month, and it will help you to be patient, even with those who don’t really deserve it. Take a deep breath, persevere and your strong work ethic will eventually be recognised by the right people. Work hard on yourself and ignore the idiots. Towards the end of the month, it will all start paying off as you’ll find yourself attracting the right type of people, people who will value you as you are. Let your hair down when you see an opportunity to, you deserve a break as well babe.

This month should be good for you, Capricorn! Venus and Uranus are bringing love, sex and exciting new people into your life – enjoy getting to know them in whatever capacity, whether as friends or as more than that. The middle of the month, in particular, will be good for all things romance, as Mars’s energy is still going strong from last month and you’ll want to channel your strength into sex or sport. Towards the end of the month you’re likely to feel like you’re being tested as work, which you may find frustrating, but don’t stress – you’ve proven yourself before and will do it again.

Towards the beginning of the month, you’ll be feeling more connected to yourself and your spirituality, thanks to Neptune and the Sun’s interaction in your chart. Enjoy the increased closeness in your relationships, and indulge in a creative hobby you might have been neglecting. The Sun will remain an influence for most of March and will bring you a little extra energy when you need it around the middle of the month. You’ll feel a drive to work hard on your passion projects, and your self-confidence will inspire those around you to do the same. At the end of the month, Mars will mean you’re tested by circumstances out of your control, but the balance with Saturn gives you an opportunity to maintain your equilibrium and ride that wave – you’ll be fine, just take it slow.