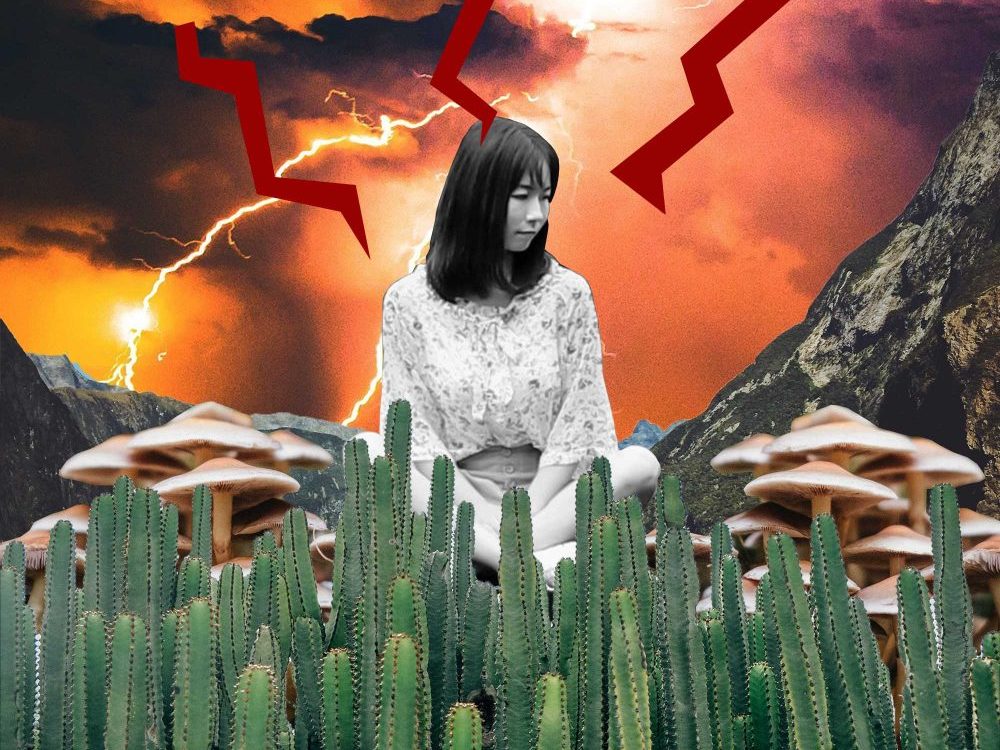 My Period Makes Me Suicidal

Premenstrual dysphoric disorder (PMDD) is a chronic condition so debilitating that 15 per cent of sufferers will attempt suicide – yet few people know it even exists, argues sufferer Kimberley Bond

*Please be aware that this article has a content warning: contains themes of suicide and self-harm*

When I was ten, the girls in my primary school class were quietly taken out of our usual maths lesson and told to sit in neat, crossed-legged rows in the school hall for a ‘special PSHE lesson’ about ‘growing up’.

The focus, you’ll have guessed, was on menstruation. We were told periods would happen once a month, we’d bleed ‘around half an egg cup or so’ and it could lead to cramping and feeling ‘a bit tense’. The period was sold to us as this hallowed right of passage. The impending streak of blood in your knickers was a sign that you had ‘become a woman’, and those who ended up getting their periods in primary school spoke about it in hushed, humbled tones.

When I turned 13 and it finally did happen – on a family trip to Disneyland, no less – my period, along with the sore boobs, giant spots and stomach-clenching cramps it brought, was a huge pain in the arse. But now, when I feel that familiar sick, sinking feeling crunching at my lower abdomen and see the droplets of blood, all I can feel is an overwhelming wave of relief. It signals the end of the blind, raging fury, the obsessive, intense feelings of self-hatred and the desire to throw myself in front of a car.

I suffer from Premenstrual Dysphoric Disorder (PMDD), and at the beginning of this year, it nearly killed me.

You probably haven’t heard of PMDD – few people have. You’ve most likely heard of PMS and the mild to moderate symptoms of bloating, cramps, headaches and mood swings that three quarters of menstruating individuals suffer from. But for the five percent with PMDD, the symptoms are so severe that the only way out of the monthly nightmare is a full hysterectomy, and 15 per cent of all sufferers have attempted suicide.

“Imagine PMDD as PMS on steroids,” psychologist Emma Kenny explains. “It’s most likely caused by a sensitivity to hormonal changes in your body. You don’t just get the normal cramps and get just a bit annoyed. You can become deeply emotional and highly lethargic. You can feel a whole host of nasty, limiting feelings.

“You can become much more depressed, and feel you can’t regulate your emotions. PMDD can also cause quite high anger. The things that wouldn’t normally bother you can make you feel highly frustrated and upset. On top of that is the incredible exhaustion. We’re not talking about feeling tired, we’re talking about not being able to get out of bed.”

These symptoms appear up to two weeks before your period is due – and only ease a few days after you start bleeding.

I first realised something wasn’t quite right with me when I was 15. While some weeks I was a perfectly happy and healthy teenager, other times, with no real trigger, I would find myself in huge states of desperation and despair, thinking about throwing myself off the bridge over the dual-carriageway where I lived. I learned to cope with the irrational moods by self-harming, hiding razor blades under my bed and trying to cover the cuts on my arms with my school cardigan.

I was too young to really notice the link between how I was feeling and my menstrual cycle – and besides, I just assumed everyone felt ‘a bit tense’ during that time of the month.

After my mother discovered the cuts on my arms, I was hauled off to a psychologist, who just described my feelings as typical teenage angst.

For the next few years, I found myself struggling more with my mental health. While I started to notice that I felt at my worst a week or so before my period, I just assumed it was the circumstances I was in. I was studying a degree I hated at a university I hated even more. I had a problematic relationship with my now ex-boyfriend. I’d grown distant from my friends back home.

But I’d look at my life and feel pangs of guilt – I had it good compared to others. Whenever I tried to express how I was feeling, I was told to be grateful for what I had.

“We’re told feeling like this is completely normal,” Kenny says. “And women are incredibly hard on themselves. They feel embarrassed to acknowledge that they’re not coping, and they’re constantly told from being very young girls this is just what women deal with.”

A decade to diagnosis

It wasn’t until 2018, almost 10 years after I was first referred to a psychologist, that I was finally diagnosed with PMDD. Despite having crafted the life I always wanted – I was a senior showbiz journalist in London on good money, I had a great group of friends and lived in a nice flat – I still felt my life was utterly unbearable half the time. I’d sit at my desk, unable to concentrate enough to string together even a short sentence. I felt like my entire showbiz team hated me and thought I didn’t deserve to be a senior. I would fantasise about heading home and drinking the bottle of bleach by the toilet. I’d keep razor blades in my locker, and it was only after my editor noticed blood seeping through my long-sleeved white shirt that I was admitted for psychiatric treatment with a mental health crisis team.

I’d sit at my desk, unable to concentrate enough to string together even a short sentence.

After the brief relief of a diagnosis – it wasn’t just me being a failure, after all, it was an actual condition!

My feelings soon spiralled to confusion and denial. With hindsight, I don’t think I fully understood the gravity of the situation. After the debris cleared following a bad two weeks, I didn’t want to have to keep taking the antidepressants that made me physically sick. I didn’t want a reminder I was failing to cope adequately. I didn’t want my life to be hindered in any way by this condition. And I felt exhausted going to a range of doctors and explaining I had PMDD, only for them to stare blankly at me and ask, “What’s that?”

“Women can feel isolated,” Kenny says. “The education around women’s health is poor. We just don’t talk about it – it’s a secret thing. Unfortunately, a lot of women’s health gets linked in with [discussion of] Tampax and towels and not taken as seriously – but [PMDD] is a debilitating condition and it’s medical.”

After trying to cope with it on my own, things came to a head in January this year. I’d lost contact with a lot of my friends after raging at them over the smallest thing. I’d walked out of my job as an editor.

As I sat in the ambulance, with my wrists wrapped tightly in bandages and a cardboard bowl by my feet for me to vomit up my cocktail of painkillers, I decided enough was enough. Working closely alongside a new crisis team, I started to rigorously track my period and went on a new set of antidepressants with fewer side effects. I started paying towards psychotherapy so I could have an outlet for my extreme mood swings, and used the Notes app on my phone to keep track of how I was feeling each day.

Kenny suggests looking at making changes to your lifestyle to help ease symptoms and taking more practical steps when handling the condition.

“Let your employer know,” she says. “Have them on side and explain the condition so they can support you with time off. If you’ve got a partner, make sure they are acutely aware of why you are the way you are during those phases. Become your own research guru and absolutely stay on top of everything.

“Then look at the obvious things – like diet and exercise. Even though it drives you mad to hear people telling you to eat a healthy diet, it’s not to patronise, it’s genuinely proven it has an impact.”

Coping without a cure

Now, with a clearer understanding of how to cope with this chronic disorder, I want to raise awareness for PMDD. I want everyone to understand just how severe it can be, and to be more compassionate to those who may be suffering in silence.

“We need to talk about it more as women,” Kenny says. “Until the shame is dropped from women’s issues and girls are brought up with a body positive belief system, we’re not going to make that much progress.”

I don’t know how I will cope with my next period. I don’t know whether the measures I will put in place will stop me succumbing to another huge dive in my mental health.  I don’t know if a hysterectomy will be in my future.

But what I do know is that, like millions of women everywhere, I need to start practising a little more self-love. I need to appreciate how serious this condition is and amend my lifestyle accordingly. And I ask all women who have read my story and seen parallels to keep speaking out. Keep going to the doctor, and keep demanding to be seen. You know your body better than anyone, and you will know what’s normal and when things are spiralling out of control.