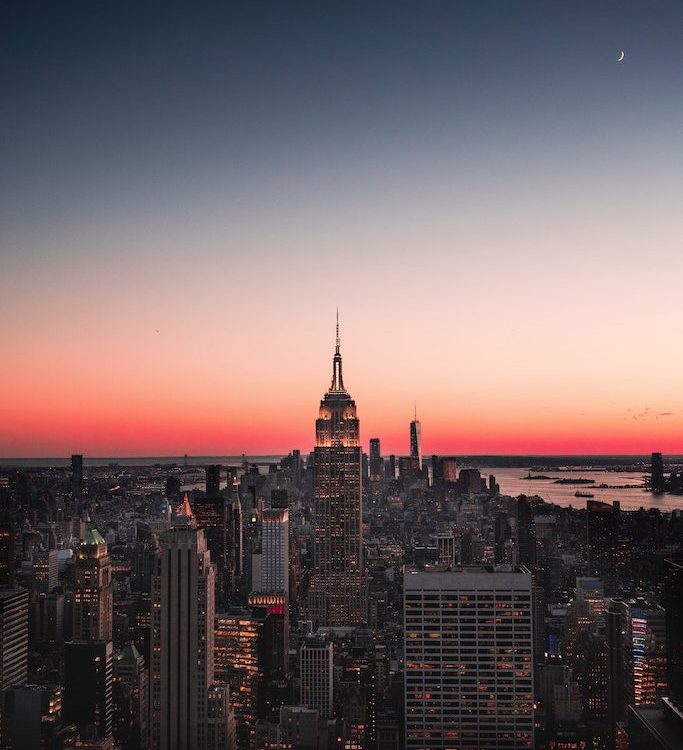 Maria Polychronis walks you through her favorite New York spots

I’ll never forget the first time I saw New York City. My earliest memory is of a smiling man waving down to me from a skyscraper window as I, half abashed, half euphoric, weaved through the Times Square traffic aboard a red double-decker tour bus. At the impressionable age of 15, the wave felt like a beckoning, an invitation to move to this extreme sensory experience and adulthood. And move here I did – several times, in fact: during university, after a four-year stint in London, after months travelling alone in West Africa. It seemed that no matter how far I went, I always made it back to New York.

While more people than ever are leaving New York, for many it’s easier said than done. It’s a place that pulls you back by the hair and morphs into something brand new each time you return; it changes right from under you in a blink-and-you-miss-it blur. Waves of gentrification have been as sequential as seasons. Years ago, locals gasped as mom-and-pop stores in Brooklyn and the Lower East Side were replaced by design-forward bars and cafes. Now, these are neighborhood staples to be fiercely protected as they fall prey to big residential development projects and corporate megachains.

I still haven’t gotten over the shuttering of my favorite café, with its perfect morning light for reading and bottles of wine after sunset, which is now a trendy dog shop (although the dog part is not so bad). And I can’t walk down Kent Avenue in Williamsburg, once the nighttime epicenter of Brooklyn’s gritty warehouse scene, without feeling accosted by the glassy high-rises that spread like ink stains around every corner. Mourning the disappearance of sacred space is what the New York City experience is made of.

But for each con there is certainly a pro, and this city is bursting with them. In a town of larger-than-life experiences, we live for the joy of small things: the first touch of warmth on our skin after months of bitter winter; a vacant subway seat on the evening commute; the steady thump, thump, thump of music escaping from restaurant windows and passing cars. There’s a joy in breaking off a piece of New York for yourself. It’s like being the first in line at the bakery as sidewalks flood with the smell of fresh bread, and the yawning city is just stirring awake.

“One can’t paint New York as it is, but rather as it is felt,” the artist Georgia O’Keeffe once said. Most of the city’s charms are intangible in this way: you can’t easily replicate them and you can’t take them with you. This has everything to do with New Yorkers themselves: diverse and transient, thick-skinned yet vulnerable, teeming with intrinsic creativity that is mirrored on the city walls like a tribute.

The rest is a factor of nostalgia. The spaces where we met, fell in love, broke up, lost our job, first cried in public, and once ran into our favorite drummer in a stroke of cinematic luck. Ultimately, most of us can retrace our history here through a series of cluttered bodega aisles, pre-war walk-ups and overflowing greasy spoons the size of postage stamps.

These are the things I take inventory of as I prepare to leave New York once more. There is a feeling, a certain thrill that you can’t bottle or invoke on demand, that I know will still be here when I inevitably return. For the spaces I love, I make lists on the backs of napkins and moving boxes. While just a drop in the bucket, these are the places I’ll visit once more before they disappear forever into the city’s changing tides.

Despite repeated promises to stop buying books before the move, my bucket list is 65% bookshops. The variety of independent sellers (Greenlight, Books are Magic, Three Lives & Company) and literary cathedrals (NY Public Library, The Morgan Library) leaves readers overwhelmed with options. The perfect Sunday, however, consists of browsing the stacks at East Village Books before settling in Tompkins Square Park with the spoils, and a coffee and vegan pistachio doughnut from Dun-Well Doughnuts across the street. At Molasses Books in Bushwick, coffee is found at the source by day as neighbors chat at the makeshift bar surrounded by used and rare editions. By night, a candlelit corner with a paperback and a glass of red wine is the best spot in all of Brooklyn.

To my smog-accustomed eyes, New York is still the most beautiful city – the brownstones! the fire escapes! – and particularly charming in the quieter parts of the East Village. Lucien Bajaj had the same idea when he opened Lucien here (comparing it to the Mediterranean) 21 years ago, making it an instant staple for downtown creatives with a taste for French fare. Occasions here are best toasted over moules mariniére at the window seat overlooking First Avenue. And although New York excels in international cuisine (Queens alone is considered one of the most diverse places on Earth), the humble pizza slice unites the whole city. Many search for the perfect pie (Di Fara and Luzzo’s are good places to start), but we usually favor proximity, winding down a night at whatever dollar pizza joint is nearby.

There’s a lush sliver of green along the East River, between the Manhattan Bridge and the Brooklyn Bridge, which offers the most spectacular views of the Manhattan skyline. Making a leisurely stroll of it is easy workand should ideally begin with a cold brew at Brooklyn Roasting Company and end with homemade ice cream at Ample Hills Creamerynear Pier 1. In between are the outdoor markets of Brooklyn Flea on Sundays, where vintage enthusiasts rummage for anything from Persian rugs to distressed denim. There are woven baskets, potted plants and artisan crafts galore. There’s also craft beer on tap and a small Smorgasburg outpost for some wonderful and truly bizarre samplings (think ramen burgers and raindrop cakes).

Anyone who leaves New York should stumble out of here dancing. The cavernous cellar of St. Mazie is for swinging to gypsy jazz or stomping in time to Flamenco, while their absinthe menu will cure any lingering inhibitions. For a taste of the old Williamsburg, live music is king. For bands old and new, the local music scene perseveres on stage at the Music Hall of Williamsburg, The Knitting Factory, and Rough Trade. When feeling nostalgic, it’s not really a night out unless we bring back the tattered band tees, ruffle up our hair and pretend that, at least in Brooklyn, it’s forever the good old days.