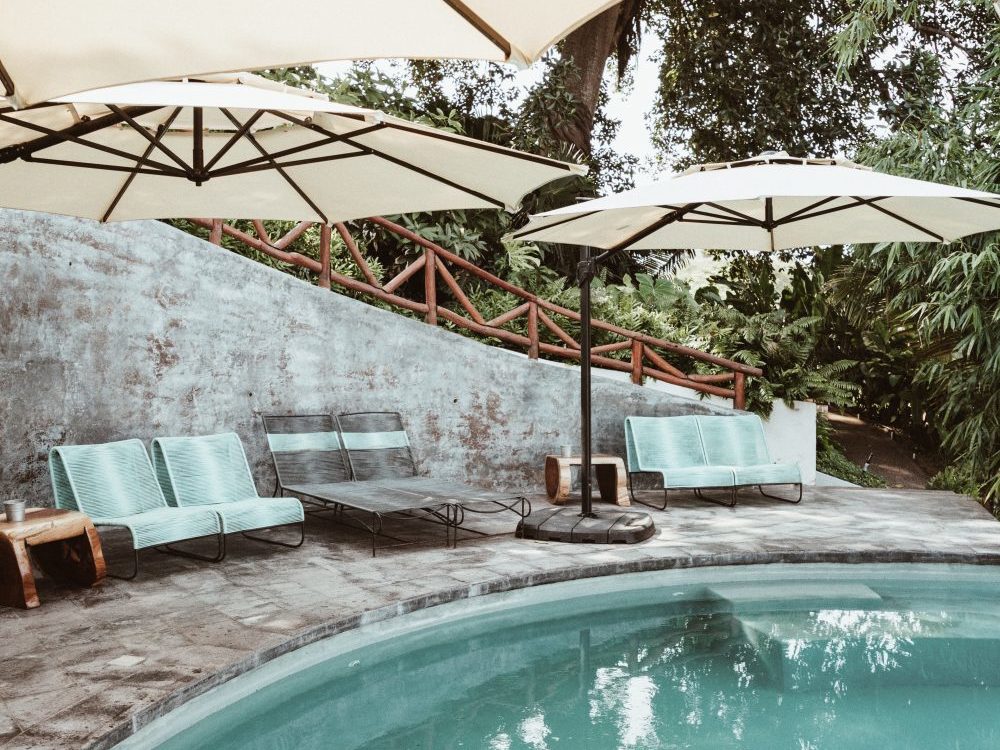 Meet the only female hotel owner in Nayarit, Mexico

It’s raining when I first meet Fernanda Castro Vallarta for dinner under the palapa canopy of her hotel’s restaurant in San Pancho, Nayarit. She’s wearing tortoiseshell hoop earrings shaped like hearts—“Forever 21!”, she tells me—and an all-black outfit which will soon blend into the inky night sky. But for now, the sun is yet to set and raindrops patter quietly on the surface of the Hotel Maraica’s nearby swimming pool as she instructs the bartender to prepare house special margaritas for the group; jalapeño or Jamaica (Hibiscus flower) are the options on the menu this evening at Muvieri, Maraica’s on-site restaurant.

With its privileged, elevated position along a coastline where big-ticket resorts and new developments for the uber-wealthy are all the rage, Maraica stands out for being—fast fashion earrings aside—a property where just about everything is carefully cultivated with sustainability in mind. That’s not to say Maraica is the only sustainable hotel in San Pancho, but it was one of the first—and perhaps still the only—to have a woman singlehandedly running the show.

Born in Tepic, the capital of Nayarit, Castro Vallarta regularly spent her holidays in Puerto Vallarta, a nearby resort city in the state of Jalisco. “That’s why this region is so special to me”, she tells me over email. But running an eco-friendly hotel wasn’t always her calling. A qualified lawyer—she still does ad-hoc social service giving advice on legal issues—Castro Vallarta also has a degree in gastronomy: “that’s my true passion. I worked in restaurants in various places across Mexico and when I came back to the Bahía with my family [the Bahía de Banderas is a municipality of Nayarit] the opportunity to build a hotel in San Pancho presented itself.”

San Pancho—officially called San Francisco—is not yet as well known a destination as Fernanda’s former holiday spot, Puerto Vallarta, nor has it quite gained the mainstream appeal of nearby Sayulita, situated just 15 minutes away. It has, however, been touted as ‘the next Sayulita’. A long-standing surfer hangout, Sayulita was once known for hippies and is now populated by travellers looking for a cute photo beneath a colourful bunting-clad street (myself very much included). For now, San Pancho is what Sayulita once was, but as the Riviera Nayarit continues to gain popularity among an in-the-know crowd looking to skip the sand bars of Cancún and pass over the perennially popular (and perennially busy) Puerto Vallarta, San Pancho looks set to grow with it.

Luckily, it’s people and properties like Fernanda and Maraica that are helping to define the hotel scene in the area; in fact, it was here that Castro Vallarta found herself able to combine her true passion of gastronomy with the running of an eco-friendly hotel. “Since I was a kid, at home and in school, my education was all about caring for the environment and respecting nature,” she says. “So, when the hotel project was born, we decided to look for the best way to honour the paradise in which we live here in San Pancho.” From the get-go, sustainability came to define Maraica and even the construction process itself was as minimally destructive as possible. As Castro Vallarta explains, “the layout was designed around the existing trees, so we didn’t have to remove them.” Those they did have to remove were transplanted into a jungle area within the hotel’s gardens.

In 2015, Maraica officially opened its doors. Inspired by Wixárika culture—the Wixárika (or Huichol) people are indigenous to Nayarit, as well as Jalisco, Durango and Zacatecas—Maraica itself means ‘aura’, while the restaurant Muvieri is named after a purifying, curative tool used by Wixárika shamans. Fully sustainable and pet friendly, Maraica certainly looks the part of an upscale eco-friendly hotel—think minimalist design, high-polish concrete floors and Acapulco chairs galore. Not to mention the quintessential bare bulbs which hang from the palapa-roofed ceiling in each of the hotel’s 12 suites.

But the real sustainable selling points are solar panelling, water recycling programmes and kitchen waste compost schemes. All that recycled rainwater and compost comes full cycle too, helping produce ingredients that are then served up in the onsite restaurant. (As you might imagine, the Muvieri menu—which changes depending on seasonal availability—is created by Castro Vallarta in collaboration with the chefs. “Being able to combine the world of gastronomy with the hotel has been a huge challenge and a satisfying experience,” she notes.)

Produce that can’t be grown on site is sourced locally where possible and the same goes for the complimentary toiletries. Packaged in glass bottles rather than plastic packets, the mint and chocolate hand wash, body wash and lotion are artisan-made specially for Maraica in Puerto Vallarta. The team at Maraica are also committed to helping clean the beachfront once a week and send their waste to the local community centre to be properly processed and recycled.

In the future, Castro Vallarta hopes to be able to offer holistic services, like yoga and meditation classes, as well as temazcales (sweat lodges). But for now, she’s simply happy to be a woman succeeding in a male-dominated field: “[it’s] been enriching on a personal level and a great learning curve. But the biggest challenge is to always be an example for both my employees and the women I spend time with, helping them to recognise the capacity we have to tackle whatever project we take on.”

And while she acknowledges that the Maraica experience isn’t for everyone—ceiling fans can’t rival air-conditioning after all, while the spotty internet service and little-to-no cell coverage might leave you throwing your phone at the wall—“it’s so important to have an eco-friendly, and above all, self-sustaining hotel…we want to help create awareness and make [sustainable living] a lifestyle, not a fashion trend.”

Hotel Maraica is situated in San Pancho, Nayarit just an hour’s drive from Puerto Vallarta International Airport. Rooms start from around $130 (£105) a night. For visitors who don’t want to stay onsite, affordable day passes are available and provide access to the pool and include credit for the Muvieri restaurant.

NOTE: all interviews conducted in Spanish. Translations are my own.